Nicholas Kristof starts his column on outsourcing with a math problem that 83% of Japanese seniors and only 30% of their American counterparts can answer.* He then leaps into a defense of free trade but with an odd twist that brings us back to the math problem:

The topic today is the growing furor over the outsourcing of jobs to India Ã¢€” and, more broadly, educational lapses here. One reason for the jobless recovery in the U.S. is that it doesn’t make much sense to have an American radiologist, say, examine your X-ray when it can be done so much more cheaply in New Delhi.

Indeed, why should computer software be written, taxes prepared, pathology specimens examined, financial analysis done or homework graded in the U.S., when all of that can be done more cheaply in Bangalore? I.B.M. is moving thousands of jobs to India and China, and Reuters says it will have Indian reporters cover some U.S. companies from there.

All this is unsettling. But to me the alarm seems overwrought Ã¢€” and dangerous, for it is likely to fuel calls for protectionism. A dozen years ago, there was a similar panic about high-tech jobs going abroad, and people said that Asia would be making computer chips while Americans produced potato chips.

Instead, free trade worked. Some autoworkers lost their jobs, but America emerged stronger than ever. Studies by Catherine Mann of the Institute for International Economics suggest that it is the same this time. Outsourcing raises American productivity, gives our economy a boost, increases foreign demand for U.S. products and leaves us better off.

Yet, as an Indian friend, Sunil Subbakrishna, pointed out to me, there is one step we should take in response to this wave of outsourcing: bolster our second-rate education system.

Mr. Subbakrishna, a management consultant specializing in technology, notes that in his native Bangalore, children learn algebra in elementary school. All in all, he says, the average upper-middle-class child in Bangalore finishes elementary school with a better grounding in math and science than the average kid in the U.S.

The broader problem is not just in schools but society as a whole: There’s a tendency in U.S. intellectual circles to value the humanities but not the sciences. Anyone who doesn’t nod sagely at the mention of Plato’s cave is dismissed as barely civilized, while it’s no blemish to be ignorant of statistics, probability and genetics. If we’re going to revere Plato, as we should, we should also remember that his academy supposedly had a sign at the entrance: “Let no one ignorant of geometry enter here.”

In 1957, the Soviet launching of Sputnik frightened America into substantially improving math and science education. I’m hoping that the loss of jobs in medicine and computers to India and elsewhere will again jolt us into bolstering our own teaching of math and science.

I agree with Kristoff on both the generally beneficial effects of free trade and of the need to improve our education system, including our grounding in math and science. I will note that this is not a universal problem, though. My understanding is that the local schools here in Loudoun County, Virginia in fact do teach algebra in elemetary school and even teach calculus rather early on. (By contrast, I didn’t have calculus until college and had algebra in 9th grade.)

As a former poli-sci prof, though, I’m rather amused by the assertion that the society values the ability to debate political philosophy more than scientific skills, however. One has only to look at the comparative paychecks of the average social scientist compared to that of the average engineer, computer industry manager, or skilled tradesman to know different. This phenomenon is likely limited to journalism circles.

*I must confess I couldn’t solve the problem either. For one thing, I haven’t had any contact with symbolic algebra in over 15 years. And either the notations have changed or I’ve simply forgotten what some of the symbols are. The lead squiggle means nothing to me and, since there is no “d” on the left side of the equation nor in any of the supplied answers, I can only assume that it isn’t actually the letter “d” but another symbol with which I’m unfamiliar. 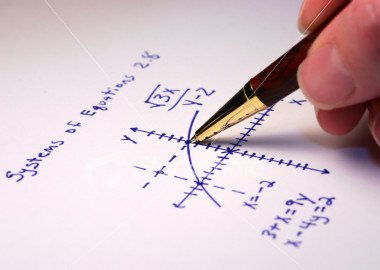