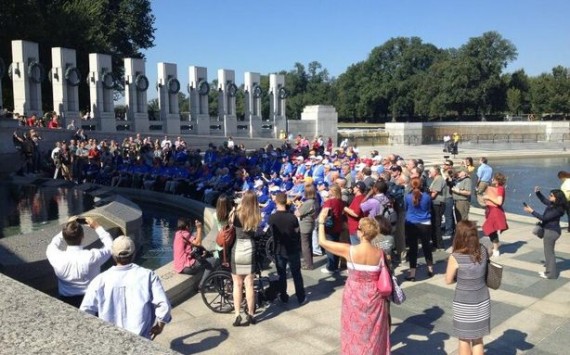 After yesterday’s incident in which World War II veterans visiting the National Mall, with the apparent help of some unnamed individuals, essentially dismantled the barricades separating them from the World War II Memorial, the National Park Service has decided that enforcing vague and confusing shutdown rules was less important than creating what would obviously have been a PR disaster:

WASHINGTON — World War II vets are allowed back in their war memorial now, shutdown or no shutdown.

A day after hundreds of tourist veterans took over the closed down World War II Memorial in the heart of the Nation’s Capital, the United States Park Police announced that planned Honor Flight visits to the monument are considered “First Amendment activities,” which are allowed regardless of the government’s operating status.

The news came at the same times as several hundred veterans from Missouri and Kansas roamed the memorial, in defiance of federal orders that the site was not open to the public. It ended some — but not all — of the circus atmosphere at the somber monument, which pays tribute to the 16 million troops who served in that war.

The memorial has been closed since midnight Tuesday morning because of the government shutdown resulting from Congress’ failure to pass a budget plan to start the new fiscal year.

Early Wednesday, Honor Flight organizers told reporters that the veterans would again be touring the site, regardless what the federal rules were. Planning for each once-in-a-lifetime veterans tour takes months to organize and tens of thousands of dollars in donations.

“We know this isn’t the park service’s fault, but we also know no one is going to arrest a World War II vet for visiting his memorial,” said Jeff Miller, co-founder of the Honor Flight Network.

“We don’t want this to become politicized. But we’ve made a habit of not letting our veterans down.”

So when the veterans arrived, they were greeted by supporters waving miniature American flags and lawmakers thanking them for their service.

Park officials said the new “First Amendment activity” distinction would be in place for all future Honor Flight visits to the site, although they could not say whether it carried for other monuments as well.

In the end, the definitions and exceptions meant little to the visiting veterans, who simply wanted to tour the memorial.

Don Coleman, an 88-year-old Navy veteran who lived his whole civilian life in Missouri, said he was worried when he boarded a plane Wednesday morning that he might not get to see the memorial, even though he knew veterans the day before had been successful. He smiled as he slowly walked from the Pacific tower to the Atlantic side, where his home state’s name was etched.

“It’s just such an everlasting impression, a part of our lives that I hadn’t gotten to see yet,” he said. “I was worried this would all be mixed up. But everything just turned out wonderful.”

Under the circumstances, this would seem like a mind-numbingly obvious solution but, given the nature of bureaucracy, it’s not surprising that the initial response to the shutdown would lead the NPS to the initial response of the rather dumb move of putting up barriers in front of something like the World War II Memorial, which is completely open to the public. The idea that they’d prevent access to a group of veterans who just want to see the Memorial was kind of silly, which is likely one reason why even yesterday the Park Police basically stood to the side and let the men and their families do their thing. Obviously, overnight, someone higher up the food chain that they needed to formulate a policy that didn’t make them look like complete idiots. Now, if only our elected leaders could figure out how to do that. 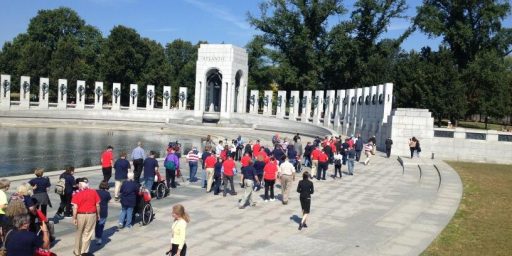