In a new survey, Americans cite politics and the news as the biggest sources of stress in their lives. 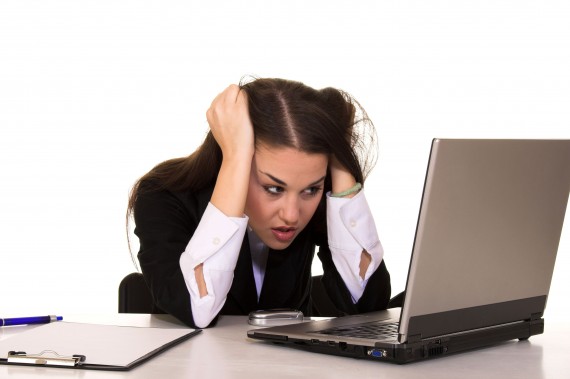 According to a new study, politics and the news are really stressing people out:

The Robert Wood Johnson Foundation just released a wide-ranging surveyon the prevalence and causes of stress in the U.S. Overall, 86 percent of Americans say they’ve been stressed out in the past month, with 26 percent saying they’ve experienced a great deal of stress.

When it comes to major stressful life events, health-related issues top the list: More than 4 in 10 respondents who said they experienced a major stressful event in the past year cited health concerns as the primary stressor.

But the survey also asked about smaller, daily stressors — the little exasperations that can add up to a miserable day. And here something surprising emerges: Americans cited “hearing about what the government or politicians are doing” as the most frequent daily stressor on their lives, and at a substantially higher rate than the usual annoyances like commuting, chores and general schedule-juggling.

Robert Blendon, a professor of health policy and political analysis at Harvard and one of the authors of the study, sees two things happening here. “First, the nature of news has become much more confrontational in domestic and international coverage,” he said in an email. “Secondly, we are also at a high point of public distrust and disdain for elected officials and seeing them on the news is stressful for a share of a Americans.”

We’re saturated with 24-hour news coverage of our government and politicians, many of whom we have extremely negative feelings toward. So it’s natural that when they show up on our TV screens – which we’re glued to about 3 hours a day - we experience a range of negative emotions. Frustration, anger, even stress. 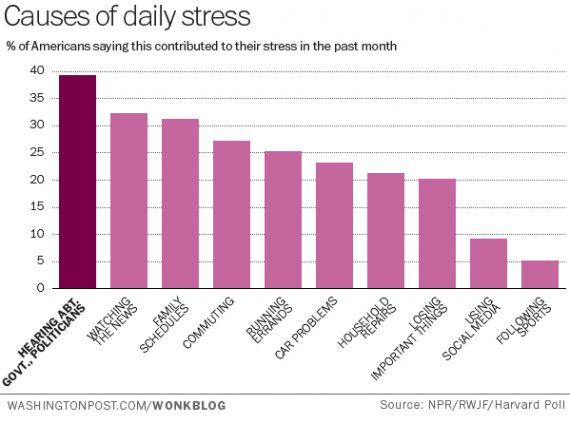 [B]oy howdy, does this beg for a follow-up. I really, really want to know what news sources cause the most stress. Is it listening to NPR? Watching Fox News? Getting your daily Limbaugh fix? Reading Kevin Drum’s blog?

Perhaps the mere act of making you think about this is, at this very moment, making you red in the face. Then again, maybe not. I want to know more. Who’s most stressed out by the news? Liberals? Conservatives? Everyone? And what outlets cause the most stress? Obviously my money is on the Drudge/Fox/Limbaugh axis, but maybe I’d be surprised. I want to hear more about this.

I would suspect that such a follow up would find that there is at least some correlation between people who limit their news and information diet to largely partisan sources on either side of the aisle and the amount of stress created by watching daily news events. For one thing, people like that in my experience also tend to be people who spend more time following political news generally, so there are going to be more opportunities for them to become outraged. More importantly, these partisan news and information sources have gotten to the point where generating and feeding off of political outrage is basically their bread and butter. So, the more you watch networks like Fox and MSNBC, and the more you read hard right or hard left blogs, the more outraged you’re going to become, and the more outraged you become the more stressed out you’re likely to become.

That begin said, it seems obvious that the phenomenon that the survey captures here can’t be fully explained just by people who limit their news consumption to partisan media, or even who pay a lot of attention to news and politics. As Andrew Sullivan notes, there is a heck of a lot to be stressful about in the news today, whether its whats going on internationally in places such as Ukraine, Syria, Iraq, or Israel, or pretty much any domestic issue which unfailingly gets reduced to little more than a partisan political fight that ends up accomplishes nothing. Politicians in both parties run for office promising to “get things done,” and yet unfailingly end up in Washington involved in the same stupid arguments over the same stupid issues. Even someone who only watching relatively brief snippets of the news is going to find themselves getting stressed out by the stupidity they see on a regular basis.

Since it’s unlikely that politics and the news are going to become less stressful any time soon, I suppose Sullivan’s advice is the best course of action:

My response is to try and compartmentalize it so I don’t get completely stressed out, or upset, or just exhausted by the noise. You want to know why I insist on getting to Ptown every summer and not leaving? It’s the yin to the yang of the arena. Without it, I’ve only got the hubby, the hounds, and Angry Birds.

I’d say the Yankees are one of my distractions, but that’s just been a source of stress lately itself. At least the NFL and College Football will be back to take some attention away from what is likely to be another painful run-up to the midterms in November.

FILED UNDER: Health, Media, US Politics 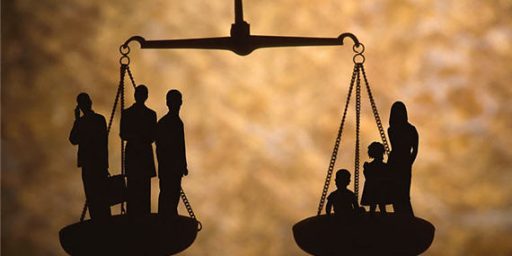