For some same-sex couples with a military spouse, living together on base is proving difficult to implement quickly. 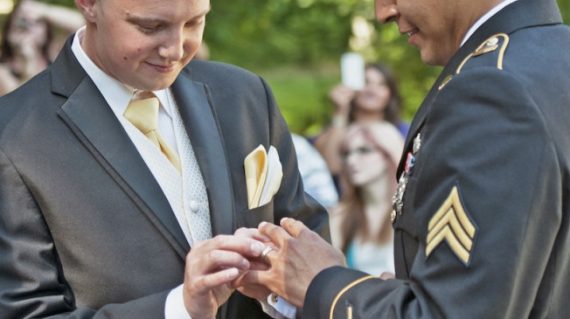 While Defense Secretary Chuck Hagel is, rightly, calling out those states who are refusing to issue dependent ID cards to the same-sex spouses of members of the National Guard, the Pentagon finds itself faced with a same-sex spouse problem of its own that is complicated by both Pentagon rules and our relationships with many of our closest allies:

WASHINGTON — Defense Secretary Chuck Hagel announced Thursday that “everyone who serves our country in uniform … should receive all the benefits they deserve.” Marine Corps Capt. Matthew Phelps’ husband had to leave Japan last month, however, because the Pentagon has not taken action to allow Ben Schock to accompany Phelps on his current assignment in Japan — something that would be available to Schock if he was Phelps’ wife.

On Thursday night, Hagel took a shot at state National Guard entities, like that of Texas, that are refusing to recognize married gay couples, yet the Pentagon itself still hasn’t fully implemented equal policies for married same-sex service members. For Phelps, so long as his orders say that he is “unaccompanied,” Schock is unable to stay in Okinawa, Japan, with Phelps unless he finds a company that would hire and sponsor him for the purpose of obtaining a visa.

“I had to come back home,” Schock said from Seattle, “even after we were getting guarantees that once the [Pentagon] benefits [for married same-sex couples] were rolled out, we would get the orders changed, but nothing was happening.”

Like those states — which claim that constitutional amendments banning same-sex couples from marrying prevent them from recognizing same-sex couples even for the purpose of allowing the couples to obtain a federal military ID card at state National Guard facilities — the Pentagon claims that Status of Forces agreements (SOFA), agreements reached with foreign countries about the conduct of troops stationed there, must be reviewed to ensure a policy of allowing the same-sex spouse of a service member to join the service member as a dependent on overseas assignments when that would be permitted for opposite-sex spouses would not violate the agreements.

Because of that, while Hagel insisted that states “have created hardship and inequality by forcing couples to travel long distances to federal military bases to obtain the ID cards they’re entitled to,” Schock is living on the other side of the globe with his parents in Seattle — more than 5,700 miles away from his husband in Japan.

[I]n August, the Pentagon did announce, in a memorandum from Hagel, “It is now the Department’s policy to treat all married military personnel equally” — a change that went into effect, for most purposes, in September.

After that, Schock said, “we … went to enroll [me] as a spouse, dependent. We did all that and it went through perfectly. Nobody blinked an eye or anything or had any qualms with that.”

As Phelps explained it, he discussed his “unaccompanied” orders with his chain of command before leaving for Okinawa, and was told that once his marriage to Schock was recognized by the Pentagon his orders would be changed to “accompanied.”

In September, Phelps wrote, “I advised my monitor that Ben had been added as a dependent, and my monitor responded that it would only be a matter of days before my tour conversion was processed to convert my tour from unaccompanied to accompanied.”

Nothing has happened since. “That’s the issue that we’re waiting for right now,” Schock said. “That would allow me to stay in the country with him as long as he’s in the country.”

Phelps wrote, though, that no change has come.

“Initial responses from my monitor were that it would take just a few more days. More recent responses have been that he had been told to stand by until Headquarters Marine Corps issued a policy on same-sex spouses accompanying their military spouses on overseas assignments,” he wrote.

“With my passport, I was only allowed to stay in the country for 90 days,” Schock said. “With his orders not being changed … I had to, essentially, leave Japan because my 90 days was up.”

This issue, of course, is far more complicated that the ongoing dispute between the Pentagon and the nine states mention in James Joyner’s post this morning. In that case, there’s a clear issue of states refusing to recognize Federal Law, not to mention the laws and valid marriages of sister states. In this particular cases, there is the far more delicate issue of the status of the American citizen spouses of American soldiers in nations where same-sex marriage is not recognized and, in some cases, homosexuality is still a taboo subject in a way that it has not been here in the United States. This seems to be especially true in nation’s like Japan and South Korea, but is also clearly an issue in Middle Eastern nations like Baharain, where the U.S. Fifth Fleet maintains a large base. The fact that same-sex relationships are increasingly recognized throughout Europe means that this is less of an issue there, but this remains an issue in any nation where there’s a permanent U.S. base that allows spouses to reside that also doesn’t recognize same-sex marriage.

The frustration of Schock and Phelps in this matter is understandable, and in the end there ought to be no reason why they shouldn’t be able to live together on base as a married couple just like an opposite-sex couple similarly situated to them. However, it’s rather obvious that the Pentagon is working through some rather delicate legal and diplomatic issues here that don’t necessarily have quick and easy solutions. Without some clear agreement from the host countries in question, it’s likely that the same-sex couple of a member of the U.S. military might find themselves in the middle of a legal quagmire when they leave the confines of a U.S. military base (and no rational person expects them to stay on base for the entire time their spouse is stationed there). So, rather than rushing into this headlong, it seems advisable for the Pentagon to make sure that proper agreements have been reached so that these spouses, who are after all American citizens, are properly protected under the relevant SOFA agreement that’s in effect. Hopefully, that will happen sooner rather than later.

FILED UNDER: Gender Issues, Law and the Courts, Military Affairs