Fifty years after the Stand in the Schoolhouse door, there's another standoff with recalcitrant states on civil rights. 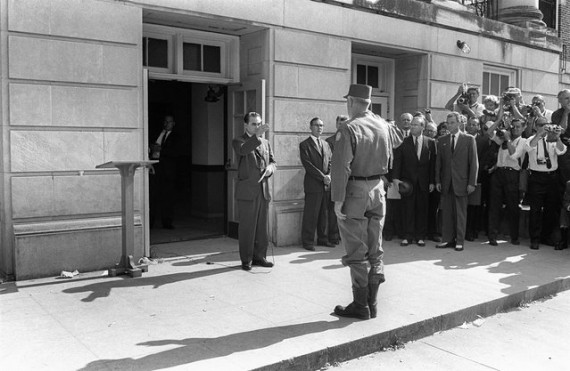 Fifty years after the Stand in the Schoolhouse door, there’s another standoff with recalcitrant states on civil rights.

Defense Secretary Chuck Hagel pledged Thursday night to expand benefits and issue dependent identity cards to the same-sex spouses of National Guard members in the nine states that have resisted the repeal of key portions of the Defense of Marriage Act.

In June, the Supreme Court ruled that the sections of the Defense of Marriage Act that barred benefits to same-sex spouses of servicemembers were unconstitutional. Following the ruling, Texas announced that it would not issue ID cards to same-sex spouses at state National Guard facilities because of a “potential conflict” between state law and Defense Department policy.

“This is wrong and causes divisions among our ranks,” Hagel told an audience at the Anti-Defamation League in New York, which included his predecessor, former Defense Secretary Leon Panetta, who was being honored by the ADL.

Hagel said the actions by the nine states violated their commitments under federal law. Without giving specifics, Hagel said he was prepared to take action against the nine states if they fail to come into compliance with DoD policy on same-sex spouses.

While I’m hesitant to compare discrimination against homosexuals to that against African-Americans, this standoff is reminiscent of the battle between the federal government and recalcitrant states as Jim Crow was ending. In 1957, President Eisenhower famously put the Arkansas National Guard under federal control to allow to enforce the Supreme Court’s rulings to desegregate the schools. In 1963, President Kennedy federalized the Alabama National Guard to end Governor George Wallace’s infamous stand in the schoolhouse door at the University of Alabama.  In both cases, citizen-soldiers from those states defied the political will of their governor, and quite likely their own personal prejudices, to carry out the orders of the commander-in-chief.

President Obama might wish to remind the governors of the nine non-compliant states of this history and allow them to obey the law of their own volition. Otherwise, federalizing the Guard in those states for 30 days and court martialing leaders who refuse to carry out their orders will quickly resolve the standoff.