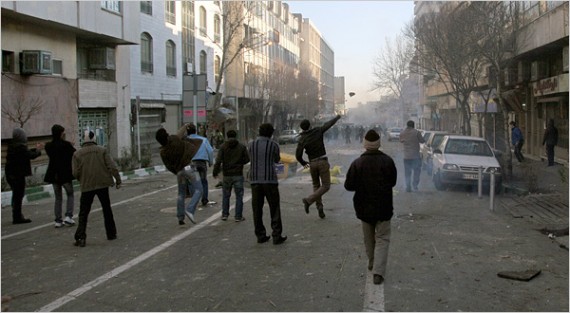 Iranians took to the streets of Tehran today to march in solidarity with the people of Egypt, and the police responded with tear gas:

PARIS — Hundreds of black-clad riot police officers, some in bullet-proof vests, deployed in key locations in central Tehran on Monday and fired tear gas to thwart an Iranian opposition march in solidarity with the uprising in Egypt, news reports and witnesses’ accounts from Iran said.

At the same time a reformist Web site reported that phone lines to the home of one opposition leader, Mir Hussein Moussavi, had been cut and that several cars had blocked access to his home, preventing him from leaving. Restrictions have also been imposed on the movements and communications of another opposition leader, Mehdi Karroubi, and the authorities refused an opposition request for a permit for a demonstration.

In the city center the police gathered in small groups at some intersections but numbered around 200 in the major squares that carry symbolic importance for Iranians and are named Revolution and Freedom. Some security forces were on motorcycles and carried paintball guns to fire at opponents, news reports said.

Despite the presence of security forces, Reuters reported, thousands of Iranians marched toward the central Enghelab, or Revolution, Square, but their way was blocked by the police and security forces. The report quoted unidentified witnesses because the authorities had apparently revived regulations barring reporters from the streets to cover such protests.

The restrictions were first invoked in the tumult that followed Iran’s disputed 2009 presidential election, when vast crowds challenged the victory of President Mahmoud Ahmadinejad and faced a prolonged crackdown characterized by killings and mass arrests.

Demonstrators chanted “Death to the dictator,” a reference to Mr. Ahmadinejad, and were met with volleys of tear gas, news reports said.

Iran is not Egypt, of course, and the regime has already survived a populist challenge to its rule once the past two years. The likelihood that this will develop into the type of mass protests necessary to bring down a government seems minimal at best. Nonetheless, it is clear  that the spirit of discontent remains alive and well in the Islamic Republic and that may be something worth looking into.