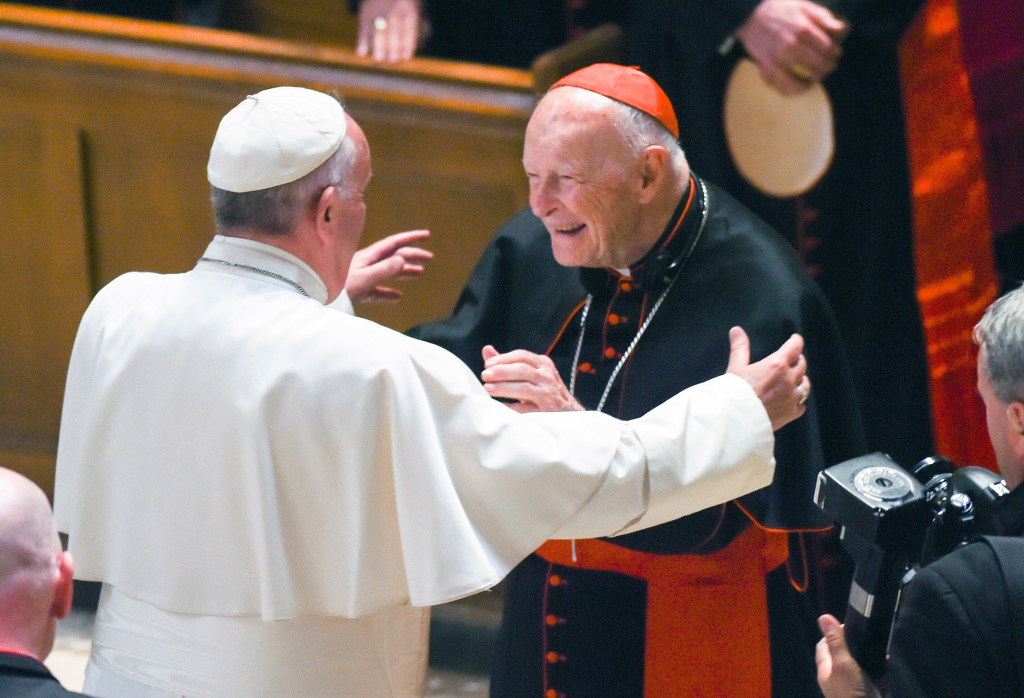 Pope Francis has defrocked former Cardinal Theodore McCarrick amid allegations of decades of abuse of underage boys and adult seminarians that was covered up by Church officials as he rose the ranks of the Vatican to the point where he became a close adviser to two Popes:

Pope Francis has expelled Theodore E. McCarrick, a former cardinal and archbishop of Washington, from the priesthood, after the church found him guilty of sexually abusing minors and adult seminarians over decades, the Vatican said on Saturday.

In a statement on Saturday, the Vatican said Mr. McCarrick had been dismissed after he was tried and found guilty of several crimes, including soliciting sex during confession and “sins” with minors and with adults, “with the aggravating factor of the abuse of power.”

While the Vatican has defrocked hundreds of priests for sexual abuse of minors, few of the church’s leaders have faced severe discipline. The decision to laicize, or defrock, Mr. McCarrick is “almost revolutionary,” said Kurt Martens, a professor of canon law at the Catholic University of America.

“Bishops and former cardinals are no longer immune to punishment,” Professor Martens said. “The reverence that was shown in the past to bishops no longer applies.”

The expulsion of Mr. McCarrick is the most serious sign to date that Pope Francis is addressing the clerical sex abuse crisis, after facing criticism that he has moved too slowly. In October, the pope laicized two retired Chilean bishops accused of sexually abusing minors. In December, he removed two top cardinals from his powerful advisory council after they were implicated in sexual abuse cases.

Since last summer, when allegations against Mr. McCarrick first surfaced, the church has been plunged into a new chapter of the ever-growing scandal. State and federal investigations across the United States are now underway, and each week a new diocese releases names of priests credibly accused of sexual abuse.

The announcement’s timing shows that church leaders hope they can move forward from the scandal before the coming week, when the pope and the presidents of bishops’ conferences around the world are meeting at the Vatican to discuss the sexual abuse crisis.

Robert Ciolek, who was abused by Mr. McCarrick in the 1980s, when Mr. Ciolek was a young seminarian and later a priest, said on Saturday that he viewed the defrocking as “as a very positive step.”

He added, “It signals that Rome may finally be serious about taking matters like abuse of power very seriously, with grave consequences for those who engage in that conduct.”

The Archdiocese of Washington said in its own statement, “Our hope and prayer is that this decision serves to help the healing process for survivors of abuse, as well as those who have experienced disappointment or disillusionment because of what former Archbishop McCarrick has done.”

James Grein, who told The Times that he was 11 when Mr. McCarrick began a sexually abusive relationship with him, said in a statement on Saturday: “For years I have suffered, as many others have, at the hands of Theodore McCarrick. It is with profound sadness that I have had to participate in the canonical trial of my abuser. Nothing can give me back my childhood.”

He added: “With that said, today I am happy that the Pope believed me. I am hopeful now I can pass through my anger for the last time. I hope that Cardinal McCarrick will no longer be able to use the power of Jesus’ Church to manipulate families and sexually abuse children.”

Cardinal Daniel N. DiNardo, president of the United States Conference of Catholic Bishops, said: “The Holy See’s announcement regarding Theodore McCarrick is a clear signal that abuse will not be tolerated. No bishop, no matter how influential, is above the law of the church.”

After a long stint at the upper reaches of the Archdiocese of New York, McCarrick had served as the Bishop of Metuchen, New Jersey and Archbishop of Newark, New Jersey and, later, Washington, D.C., which is considered along with its counterpart in New York City to be the most important Diocese in the nation. He was later elevated to Cardinal by John Paul II. While there had been whispers about abuse allegations in McCarrick’s past, Francis chose to ignore them and made McCarrick a close adviser on internal church matters. Earlier this year, though, Francis was forced to accept McCarrick’s resignation as the charges against him became public, and allegations have been made that he was aware of the Cardinals past even while bringing him into his inner circle. Additionally, it has become clear that the Pope’s rhetoric on these new revelations was largely empty, especially when a senior Vatican official alleged late last month that both Pope Francis and his predecessor Pope Emeritus Benedict XVI were aware of the allegations against McCarrick as well as other abuse allegations that were also hidden from the public

This appears to be a first in the more than 2,000 year history of the Catholic Church. While verification of such a thing is difficult given the passage of time and the fact that the early Church was operated in a far different manner than it is today, this is most certainly the first time in known history that a Cardinal, a so-called “Prince of the Church,” has not only been stripped of their title and their privileges but stripped of their Priesthood itself. Indeed, defrocking in and of itself is extraordinary and has usually been limited to Priests who have broken the rules of the Church such as the celibacy rule and the rules regarding the confidentiality of the confessional. Other occasions have come in cases of schism, such as in the early eighties when St. Pope John Paul II defrocked many of the priests who were the followers of the ultra-conservative Marcel Lefebvre who rejected the changes of the Vatican II Council and questioned the legitimacy of essentially every Pope who had served since Pope Pius XII died after World War II. It also counts as the highest-ranking and most severe punishment that has been inflicted by any Pope since the sexual abuse scandal started to become public beginning in the 1980’s.

Rod Dreher, who has been following the allegations against McCarrick since long before they had publicly emerged, comments as does Ed Morrissey. As both men note, while this step is extraordinary and well-deserved it is, at best, only a step forward in completing a cleansing process inside the Church that is long overdue and cleansing it of a sickness of which McCarrick is only a single example. For decades, it appears that people in New York, New Jersey, and Rome knew exactly what McCarrick was doing when he was taking advantage of young boys and young seminarians. Indeed, according to some reports one would have had to be willfully blind not to see what was happening. The same is true, of course, of all the other cases that occurred at the lower levels of the Church, as we learned last week with the release of a number of reports enumerating abuse by hundreds of Catholic Priests, reports that are likely to be repeated across the nation as more Diocese and state law enforcement agencies release their reports on abuse allegations. Getting rid of McCarrick and defrocking him were both good first steps, but they are only first steps.There’s much more to be done.