The Vatican has stopped short of calling the reports "Fake news." 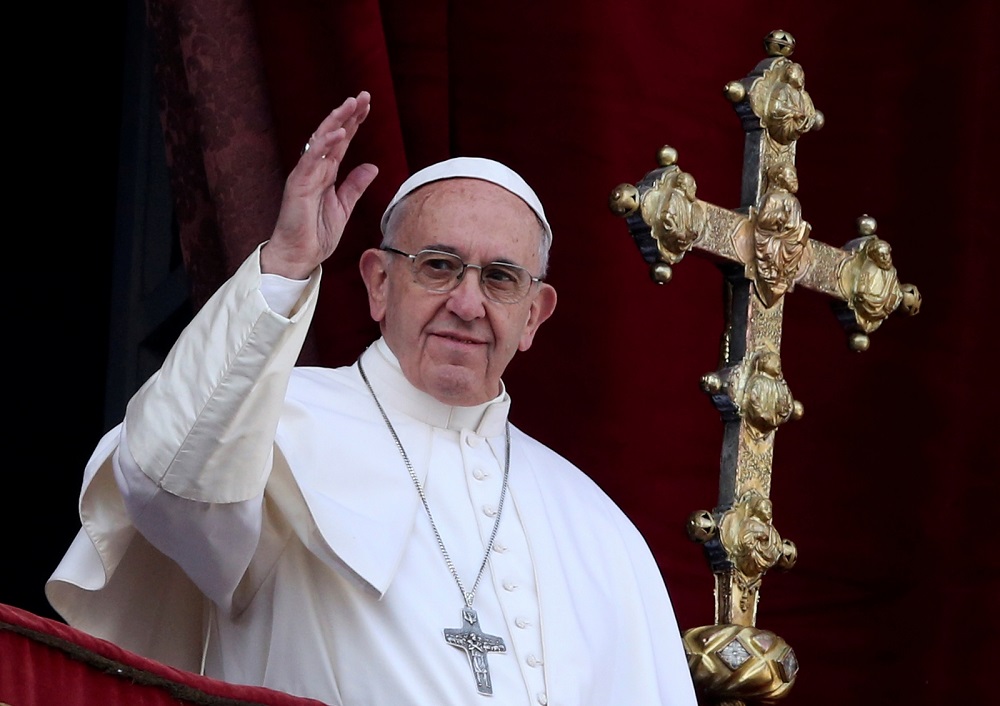 Reports that Pope Francis told an atheist friend that there is no Hell are circulating widely in the blogosphere, most notably at CNS and Rorate Caeli. The Church, for its part, is stopping just short of calling it “fake news.”

The Vatican said comments attributed to Pope Francis denying the existence of hell are a product of an Italian journalist’s “reconstruction” of the pope’s remarks and not a faithful transcript of the pope’s real words.

Eugenio Scalfari, a co-founder and former editor of La Repubblica, an Italian daily, said Francis — with whom he has had several telephone conversations and face-to-face meetings — invited him to his residence March 27.

During their conversation, Scalfari, 93, an avowed atheist, claims the pope said that while the souls of repentant sinners “receive the forgiveness of God and go among the line of souls who contemplate him, the souls of those who are unrepentant, and thus cannot be forgiven, disappear.”

“Hell does not exist, the disappearance of sinful souls exists,” Scalfari claims the pope said in the interview published March 29.

The Italian journalist has explained on more than one occasion that he does not take notes or record his conversations with the pope; he re-creates them afterward from memory, including the material he puts in quotation marks.

The Vatican issued a statement soon after the article was published, saying the pope did receive Scalfari “in a private meeting” to exchange Easter greetings, but he did not “give him an interview.”

Regarding the alleged words of the pope, which were also published in a similar article written by the journalist in 2014, the Vatican said Scalfari’s article “is a product of his own reconstruction in which the actual words pronounced by the pope are not cited.”

“No quotes of the aforementioned article should therefore be considered as a faithful transcription of the Holy Father’s words,” the Vatican said.

According to the Catechism of the Catholic Church, “immediately after death, the souls of those who die in a state of mortal sin descend into hell, where they suffer the punishments of hell, ‘eternal fire.'”

“The chief punishment of hell is eternal separation from God, in whom alone man can possess the life and happiness for which he was created and for which he longs,” the catechism says.

The alleged quotes ascribed to Francis directly contradict the many public remarks he has made in homilies and speeches confirming the existence of hell.

Meeting a group of children and teens during a Rome parish visit March 8, 2015, a female Scout asked the pope, “If God forgives everybody, why does hell exist?”

The pope praised the question, saying it was “very important” as well as “a good and difficult question.”

Scalfari’s article (“Il Papa: ‘È un onore essere chiamato rivoluzionario'”) is behind a paywall and, in any case, in Italian. Rod Dreher quotes it thusly:

Your Holiness, in our previous meeting you told me that our species will disappear in a certain moment and that God, still out of his creative force, will create new species. You have never spoken to me about the souls who died in sin and will go to hell to suffer it for eternity. You have however spoken to me of good souls, admitted to the contemplation of God. But what about bad souls? Where are they punished?

“They are not punished, those who repent obtain the forgiveness of God and enter the rank of souls who contemplate him, but those who do not repent and cannot therefore be forgiven disappear. There is no hell, there is the disappearance of sinful souls.”

Dreher, who has fallen out with the Church, posits:

My guess, in charity, and given that Francis has in the past spoken of the reality of the demonic, is that this is made up by the atheist Scalfari. But I could be wrong. Who knows with Francis? The bizarre — truly bizarre — thing is that Francis continues to grant Scalfari interviews (this is his fifth) even though Scalfari doesn’t take notes, and the results of the interviews rattle the Vatican, over the things Scalfari quotes Francis as saying.

But note the non-denial denial of the Vatican statement:

Not, “The Holy Father said no such thing” or “The Holy Father categorically denies the quotes attributed to him and furthermore reiterates longstanding Church teaching in the existence of Hell.” Francis seems to be playing a little game here. It’s quite probable that a 96-year-old transcribing an interview without benefit of notes got the quote wrong. It’s highly unlikely that he got the gist of the matter wrong.