One provision of the President's jobs bill would give an ill-advised right to the unemployed. 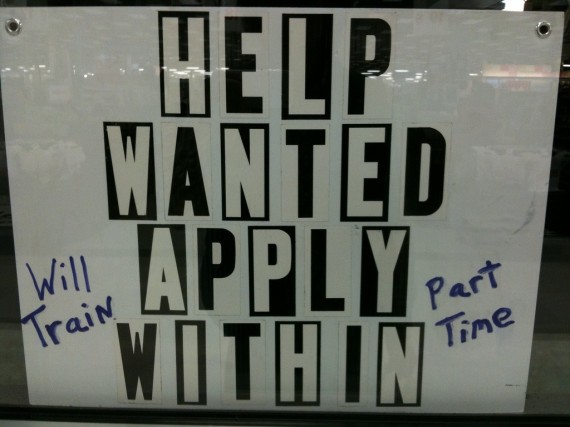 Tucked away in the President’s jobs bill is a provision that would make it illegal to discriminate against the unemployed in hiring decisions:

President Obama’s American Jobs Act, which he presented to Congress on Monday, would make it illegal for employers to run advertisements saying that they will not consider unemployed workers, or to refuse to consider or hire people because they are unemployed.

The proposed language is found in a section of the bill titled “Prohibition of Discrimination in Employment on the Basis of an Individual’s Status as Unemployed.” That section would also make it illegal for employers to request that employment agencies take into account a person’s unemployed status.

It would also allow aggrieved job-seekers to seek damages if they have been discriminated against. This provision in particular prompted Rep. Louie Gohmert (R-Texas) to argue that Obama’s proposal is aimed at creating a new, special class of people who can sue companies.

He said this provision would only discourage companies from interviewing unemployed candidates, and would “help trial lawyers who are not having enough work,” since there are about 14 million unemployed Americans.

“That’s 14 million potential new clients that could go hire a lawyer and file a claim because they didn’t get hired even though they were unemployed,” he said.

Under the bill, companies saying they will not consider unemployed candidates could face a court order enjoining them from this practice, a fine of up to $1,000 per day or “reasonable attorney’s fees.” Other violations could lead to damages as high as $5,000.

Specifically, the operative language of the bill (PDF) says the following:

(1) publish in print, on the Internet, or in any other medium, an advertisement or announcement for an employee for any job that includes-

There are identical provisions that apply to Employment Agencies.

On it’s face, this is something that appeals to people simply because of the fact that the economy is in such bad shape right now, and the number of long-term unemployed people is so high, that a story about employers stating that they do not wish to receive resumes or job applications from unemployed people seems unfair on some level. Creating a new employment right, though, isn’t the answer to this perceived unfairness, and the problems that the law creates far outweigh its psychic benefits. In fact, a law like this could arguable cause employers to be more cautious about hiring any new employees at all, for fear of encountering legal claims, attorney’s letters, and lawsuits.

The first part of the law, subsection(1), is easy enough for employers to comply with simply by making sure that their job advertisements don’t include language that says anything like “no applications from unemployed people.” The same goes for subsection (3) regarding the instructions that the employer gives to an employment agency soliciting applications on its behalf. The problems with the bill, though, come in subsection (2). In essence, it tells any person who is unemployed, applies for a job, and is denied, that they have a potential legal claim because the prospective employer didn’t consider them for employment, or hire them, because they were unemployed. Establishing that this isn’t the case would be incredibly difficult for employers, and would essentially require them to keep records about people they didn’t hire on the off chance that they might be sued at some point down the road. Moreover, there are likely to be a host of legitimate business reasons why an employer chooses one prospective employee over another that have nothing to do with whether or not a person was unemployed at the time. How is the employer supposed to establish what that reason is without engaging in an expensive, time consuming, and costly legal battle?

It’s not hard to see how employers might respond to something like this. They’ll be more selective in setting forth job critera in an effort to discourage people from applying. They’ll be rethink how much they’re willing to pay employees given the possibility of increased legal expenses down the road. And, in some cases, they’ll be less willing to hire new employees if it isn’t worth the risk of exposing themselves to harassment by attorneys with dollars signs in their eyes. The only profession that this part of the bill is a “jobs bill” for, then, is the legal profession, which also happens to be one of the Obama campaigns biggest supporters.

Aside from the consequences that would result from enacting this type of law, I really have to question whether this can even be considered good policy. Because of a history of legally enforced discrimination and much worse, we’ve decided that certain factors — race, ethnicity, etc — cannot be considered by employers in making hiring decisions. Beyond these exclusions, though, employers are generally free to consider whatever factors they wish to in making a hiring decision. Sometimes, the decision to hire one person over another ends up coming down to the question of which person was more likeable in face-to-face interview, or which person is deemed to be better able to “fit in” with the culture of the company.

Decisions based on these factors aren’t always “fair” according to some abstract sense of justice, but we don’t get the law involved because we recognize both the cost of such detailed regulation of hiring, and the fact that, in the end, employers should have the right to hire or fire whoever they want.  Employers who aren’t hiring the long-term unemployed right now are doing so because they can afford to by choosy in a glutted labor market, and because there are often legitimate concerns about whether someone’s skill set has deteriorated over the course of their unemployment. Who are we to say that employers are wrong to think this way and that they should be forbidden from making this decision? It may not seem “fair,” but, then life isn’t always fair and the government doesn’t exist to guarantee absolutely fairness.

FILED UNDER: Law and the Courts, US Politics, American Jobs Act