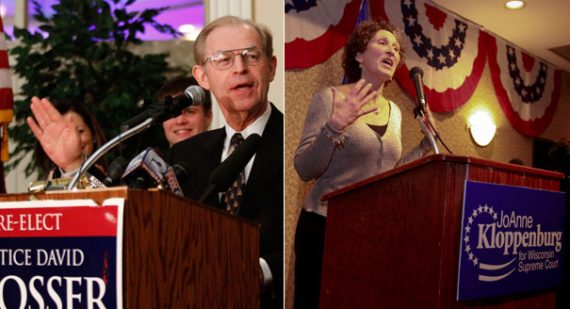 Not surprisingly, Wisconsin Supreme Court Justice David Prosser remains at the top of the race after a statewide recount:

But the battle may not be over yet, as Kloppenburg mulls whether to challenge the results in court.

And if a legal contest goes on long enough, attorneys say it could delay efforts to swear Prosser in for a new term on Aug. 1, leading to a temporary vacancy on the closely divided high court.

She will spend the coming days reviewing the findings of the recount to determine whether to sue over the results, according to her campaign manager Melissa Mulliken.

“I’m not going to speculate” on the likelihood of a lawsuit, Mulliken said. “We have to look at the record and analyze the evidence and the law and make our decision from there.”

The struggle over the court seat was magnified by the state’s political divisions, with conservatives lining up behind Prosser and liberals siding with Kloppenburg.

During the primary, the officially nonpartisan campaign focused on the court’s 4-3 split, in which Prosser often – but, he stresses, not always – sides with the conservative majority. Both he and Kloppenburg have insisted they would be impartial, while questioning each other’s objectivity.

Now that bill has been passed by the Legislature but blocked from taking effect by a court challenge. Republican legislative leaders have suggested they could add the same language to the biennial state budget, a move that also could face a court challenge.

Ultimately, the issue could be decided by the Supreme Court – unless a temporary vacancy in Prosser’s seat produces a 3-3 tie, in which case a lower court might have the last word.

It’s inconceivable that Kloppenburg would have any more success in the court system than she did with the recount, especially considering that she’s facing at 7.000 vote deficit. However, if she’s entered the annals of sore-loserdom, the odds of success won’t necessarily dissuade her.