Those attempting to read the Kremlin tea leaves now that Dmitry Medvedev has taken over Russia’s presidency and Vladimir Putin has been bumped over to premier have this to chew on: Dmitry Medvedev may be Russia’s president but Vladimir Putin has kept his place in the Kremlin.

When Putin came to his old office in the Kremlin on Monday to propose the names of ministers for his government, the former president made for his customary seat on the left of the desk.

But he paused before sitting down and told President Medvedev: “Now this is your place,” Russia’s Kommersant daily reported.

“Oh, what’s the difference?” Medvedev answered and immediately sat on the right of the desk, where Putin’s guests traditionally perched for the eight years of his presidency.

I haven’t the slightest idea what this means. Perhaps Medvedev is signaling his deference to his former boss. Or maybe he just doesn’t give a damn which of two identical chairs he sits in.

Analysts and media said the seating arrangements at Monday’s Kremlin meeting showed that Putin — at least for now — remained in the driving seat. Medvedev swiftly approved all Putin’s proposals for the government, which was filled with the former Kremlin chief’s closest advisers and trusted allies.

Along with most observers, I always presumed Putin would still be in charge when he swapped offices and I see no reason to move off that position. Whether Medvedev is waiting to make his move or is comfortable in the second chair remains to be seen. 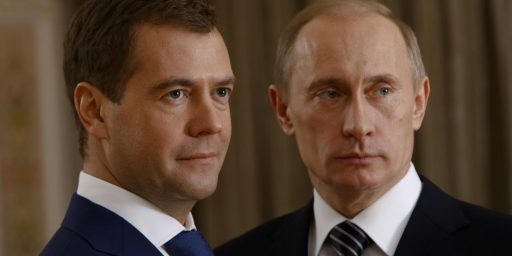