Vladimir Putin will easily win re-election, but some are beginning to wonder who or what comes after him.

Last week, Russian President Vladimir Putin announced that he would be running for a fourth term in office, a race that he will obviously win. As The New York Times notes, though, some observers are starting to wonder who might succeed him:

With the victory of President Vladimir V. Putin assured, the real contest, analysts said, is the bare-knuckled, no-holds-barred fight to determine who or what comes after him by the end of his next six years in office, in 2024. What might be called the Court of Putin — the top 40 to 50 people in the Kremlin and their oligarch allies — will spend the coming presidential term brawling over that future.

When Mr. Putin confirmed last week that he would run again, he might as well have been firing the starting gun for the race toward his succession. He is barred by the Constitution from seeking a third-consecutive term, his fifth total, in 2024.

“The election itself does not matter at all,” said Gleb O. Pavlovsky, a political analyst and former Kremlin consultant. The people around the president, he added, “are deciding the question of who they themselves will be after Putin. That is the main motive behind this fight: It is a struggle for a place in the system after Putin is gone.”

While no one can be certain what Mr. Putin, 65, will do when his next term ends, those in his inner circle are already preparing for the day he leaves the presidency, eager to preserve their power and to avoid any fallout that could follow a change in leadership. With an expiration date on the horizon, his court is beginning to focus more on self-preservation than on serving Mr. Putin.

This jockeying for power is expected to offer all the drama that the March 2018 presidential race sorely lacks. Cloistered, for now, mostly behind the Kremlin walls, the intrigues are expected to burst into public view with increasing frequency as the end of Mr. Putin’s next term approaches.

Several internal battles have already erupted publicly, including one exposed in startling court testimony last week in the corruption trial of a former economy minister, and another over the dismantling of a respected research university.

“You cannot hide the enormous tension, the enormous degree of uncertainty within the Russian elite,” said Konstantin Gaaze, who contributes political analysis to the website of the Carnegie Moscow Center, a policy research organization. “They will do stupid things; they will blackmail each other; they will write reports about each other and bring them to Putin.”

For the coming three months, the election will be the main distraction. Then Mr. Putin, who will turn 72 in 2024, is expected to start building something of a retirement plan.

In the view of some analysts, the president believes that trying to retain the job for life would be a mistake. One day, if he stays too long, he could be hastily deposed — like the recent experience of President Robert Mugabe in Zimbabwe after 37 years in office.

“Putin thinks of himself as an historical figure, and he knows that if he wants to put himself into the history books, he should not repeat Mugabe’s mistake — he should find the right time to leave,” said Konstantin Kalachyov, the head of the Political Expert Group and an occasional consultant for the Kremlin.

At the same time, Mr. Putin is likely to want to preserve some political role after 2024 and not simply retire to his dacha, or worse, end up in jail.

“He cannot just go,” Mr. Gaaze said. “He knows perfectly well that if his successor fails, they will both be prosecuted.”

Some expect Mr. Putin to reshape the Constitution to create some kind of higher military or security council, appointing himself to lead it and securing his influence. “I cannot imagine a situation where he gives all power to the successor; he does not trust anybody,” Mr. Gaaze said.

Mr. Pavlovsky, who worked in the Kremlin under President Boris N. Yeltsin, recalled that the process to replace Mr. Yeltsin, who was ailing, began right after he won the 1996 election and would clearly not run again.

It meant rebuilding the state, not just replacing the man.

“We knew that Yeltsin would be gone in 2000, and we did not want the state to go with him,” Mr. Pavlovsky said. “It was Yeltsin’s Russia. Yeltsin was going, so Yeltsin’s Russia was going too, and we had to found a new Russia.”

Mr. Yeltsin appointed Mr. Putin his successor in 2000, and he has been the most powerful man in Russia ever since. Because Mr. Putin has centralized so much power, the question of who will succeed him is especially urgent.

So the various factions within the Putin Court will seek to convince the president to name an heir apparent who best preserves their collective interests.

The article goes on to name a number of people in Putin’s inner circle who could be potential successors. One name that isn’t mentioned, interestingly enough, is Russian Prime Minister Dmitry Medvedev. Medvedev, of course, served a single term as Russia’s President from 2008 to 2012, during which time Putin was Prime Minister and by all accounts the real power in Russia throughout those four years. At the end of Medvedev’s term, Putin returned to the Presidency and Medvedev became Prime Minister, which is actually known as Chairman of the Government of the Russian Federation. Under the Russian Constitution, Medvedev is considered the successor to the Presidency and would assume the office in at least an acting basis in the event of the death, resignation, or impeachment of the sitting President. This is how Putin himself initially became President of Russia in 2000 when Boris Yeltsin decided to step down after eight years in office. Medvedev is also known to be close to Putin’s inner circle and a Putin loyalist. Given that, one would think that he would view himself as a potential Putin successor in the event that Putin doesn’t seek to extend his time in the Presidency at the end of the term he will obviously win re-election to next year. In that regard, it’s worth noting that Medvedev is a relatively young 52 years old and would be 59 in 2024 when Putin’s fifth term would come to an end.

Notwithstanding the reports that Putin is reluctant to effectively make himself President for Life due in no small part to what happened to Robert Mugabe in Zimbabwe, there’s always a possibility that could change. As noted above, Putin had already engineered an end run around the Russian Constitution’s limitations on Presidential succession when he “stepped aside” to become Prime Minister while Medvedev assumed the Presidency for four years, so there’s really nothing stopping him from doing it again and repealing the provision that would bar him from running again after 2024. This could be especially true if the succession fight remains unclear or if the domestic or international situation turns against Russia in such a way that his status at the top of the government becomes essential to his survival. As it stands, Putin’s party and its supporters have enough control of the legislature to push through any such change easily, and at least at this point Russian public opinion seems to be largely pro-Putin in no small part because Russians seem to believe he’s made Russia a player on the world stage in a way that it had ceased to be in the immediate years after the collapse of the Soviet Union.

Even if Putin declines to run for another term in 2024, he’s likely to remain a significant power behind in the throne in some manner. The article quoted above notes the possibility that Putin could decide to create some kind of security council that he would head that would effectively be the power behind the throne while the President and Prime Minister would be the public faces of Russian power. At the same time, though, Putin does seem to be enjoying his time in power for the time being so it’s possible that he may not be so eager to step aside, especially if the fight to succeed him proves to be as inconclusive as it appears to be right now. 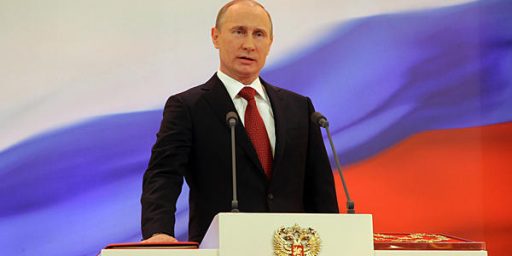