We're hearing the howls of a wounded bear. 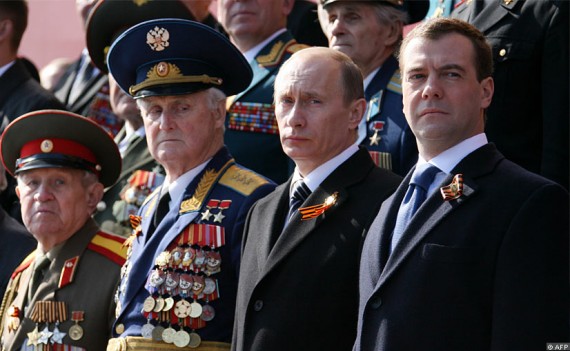 In an official statement reprinted on NATOSource, Medvedev claims this step was taken after NATO and the United States rebuffed repeated gestures from Moscow to cooperate. He asserts, “Rather than showing themselves willing to hear and understand our concerns over the European missile defence system at this stage, they simply repeat that these plans are not directed against Russia and that there is no point for us to be concerned. That is the position of the executive authorities, but legislators in some countries openly state, the whole system is against Russia.”

First, I am instructing the Defence Ministry to immediately put the missile attack early warning radar station in Kaliningrad on combat alert.

Second, protective cover of Russia’s strategic nuclear weapons will be reinforced as a priority measure under the programme to develop our air and space defences.

Third, the new strategic ballistic missiles commissioned by the Strategic Missile Forces and the Navy will be equipped with advanced missile defence penetration systems and new highly-effective warheads.

Fourth, I have instructed the Armed Forces to draw up measures for disabling missile defence system data and guidance systems if need be. These measures will be adequate, effective, and low-cost.

Fifth, if the above measures prove insufficient, the Russian Federation will deploy modern offensive weapon systems in the west and south of the country, ensuring our ability to take out any part of the US missile defence system in Europe. One step in this process will be to deploy Iskander missiles in Kaliningrad Region.

Other measures to counter the European missile defence system will be drawn up and implemented as necessary.

If the situation continues to develop not to Russia’s favour, we reserve the right to discontinue further disarmament and arms control measures.

Medvedev’s statement repeatedly expressed that this process is reversible but that “if we are asked to ‘cooperate’ or in fact act against our own interests it will be difficult to establish common ground. In such a case we would be forced to take a different response. We will decide our actions in accordance with the actual developments in events at each stage of the missile defence programme’s implementation.”

Barry Pavel,  Director-Designate of the Brent Scowcroft Center on International Security at the Atlantic Council and former Senior Director for Defense Policy and Strategy on the National Security Council staff, declared on Twitter upon seeing the announcement that “NATO should ignore this.” Later, he added, “This is about Russian domestic politics.”

Tomas Valasek of the Centre for European Reform tells Financial Times that , “Mr. Medvedev seems to be taking the debate on missile defence into the strategic realm of US-Russia arms control,” adding, “Here, the prize is to get a follow-on deal to the Obama-Medvedev agreement of 2008. The chances of success here are already low and these comments may push them lower.”

Thus far, Pavel’s analysis seems to be shared by the White House and NATO. Secretary General Anders Fogh Rasmussen says that he has “taken note” of Medvedev’s statement and termed his actions “very disappointing.” National Security Council spokesman Tommy Vietor declared, “We continue to believe that cooperation with Russia on missile defense can enhance the security of the United States, our allies in Europe and Russia, and we will continue to work with Russia to define the parameters of possible cooperation. However, in pursuing this cooperation, we will not in any way limit or change our deployment plans in Europe.”

I share my colleague’s sense that Medvedev is playing to a domestic audience and that the United States and its NATO allies should not make policy decisions based on temper tantrums from Moscow. But that doesn’t mean that the Russians aren’t genuinely concerned about the changing balance of power represented by this missile plan. Indeed, our constant dismissal of their concerns only rubs their noses in the fact that we now view them more as a nuisance than a serious power.

Medvedev’s statement comes on the heels of Tuesday’s announcement that the United States was ending cooperation with Russia under the Conventional Forces in Europe treaty, after Moscow had long since fallen out of compliance. Asked directly yesterday whether this would impact ongoing efforts to work with Russia on missile defense, State Department spokeswoman Victoria Nuland declared, “we don’t see a direct connection between the two: missile defense is missile defense, conventional arms control is conventional arms control.”

But this is rather an obtuse position. Indeed, linkage—the explicit tying together of various bilateral concerns to encourage cooperation on issues the United States cared about—was a cornerstone of American policy during the period of détente with the Soviets. Surely, the Russians see all matters of the security relationship with the United States and its NATO allies as intermingled.

NATO can talk until it’s blue in the face about how its missile defense program is aimed at unspecified rogue states (a not-so-secret code for “Iran”) but the Russians naturally see a missile defense system based in countries within what they consider their sphere of interest a threat. After all, missiles are about all Moscow has to cling to as evidence that they’re still a great power. For that matter, as FT notes, the fourth phase of NATO’s Phased Adaptive Approach goes beyond the short- and medium-range missiles that would ostensibly be acquired by Iran to “deploy an interceptor capable of shooting down ICBMs, which form the bulk of Russia’s nuclear deterrent.”

So, I think we should take Medvedev seriously when he declares, “We will not agree to take part in a program that in a short while, in some 6 to 8 years’ time could weaken our nuclear deterrent capability. The European missile defense program is already underway and work on it is, regrettably, moving rapidly in Poland, Turkey, Romania, and Spain. We find ourselves facing a fait accompli.” Those sound very much like the howls of a wounded bear.