The presidential race was essentially tied going into the party conventions.  As expected, Barack Obama got a small bounce, somewhere in the neighborhood of 5 points, from the Democratic convention.  As expected, McCain is getting a bounce from his convention.  The wild card factor, the announcement of Sarah Palin as McCain’s running mate and her subsequent convention speech, seems thus far to have worked out swimmingly, reenergizing the campaign with the base.

The shake-out from all of this, though, is that we’re right where we started, with a race that’s essentially tied.    Yesterday’s Zogby poll has McCain-Palin at 49.7 percent and Obama-Biden at 45.9 percent.  Then again, Zogby, who uses a complicated party weighting and likely voter adjustment, had McCain up 47.1 to 44.6 going into his convention.  Gallup’s daily tracking poll — which uses a ridiculously small sample and does not screen out those unlikely to show up to vote — had McCain up 4.2 points as of Friday. RealClearPolitics, which hasn’t updated since Friday and whose most recent polls therefore don’t fully account for the GOP bounce, has Obama up 2.4.

What’s interesting, though, is that despite the race having shown no real movement in the national head-to-head polls, Obama has made some gains in the more meaningful state-by-state race.  Electoral-Vote.com has it Obama 301, McCain 224, Ties 13.  On the eve of the conventions, they had it at Obama 269, McCain 256, Ties 13.   The difference?   The flipping of Ohio and several western states from “Barely GOP” to “Barely Dem.”   Their methodology is overly reliant on single polls  (RealClearPolitics still has it at 273-265) but the movement bears watching.

I’ll continue to believe, unless confronted with strong and sustained contrary evidence, that this is Obama’s race to lose.  All the fundamentals point to a Democratic win this year and he’s a much more dynamic speaker than McCain.  That it remains a statistical toss-up  — that Obama isn’t running away with it — at this stage is interesting, indeed. 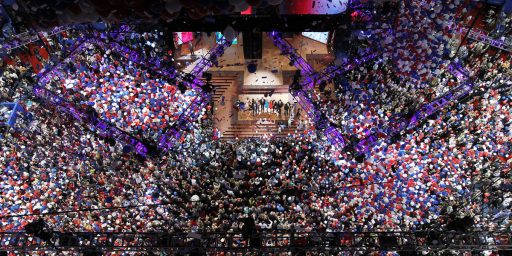