Measles cases are on the rise in Europe due to the fact that, despite all the evidence to the contrary, people still believe the lies of the anti-vaccination movement. 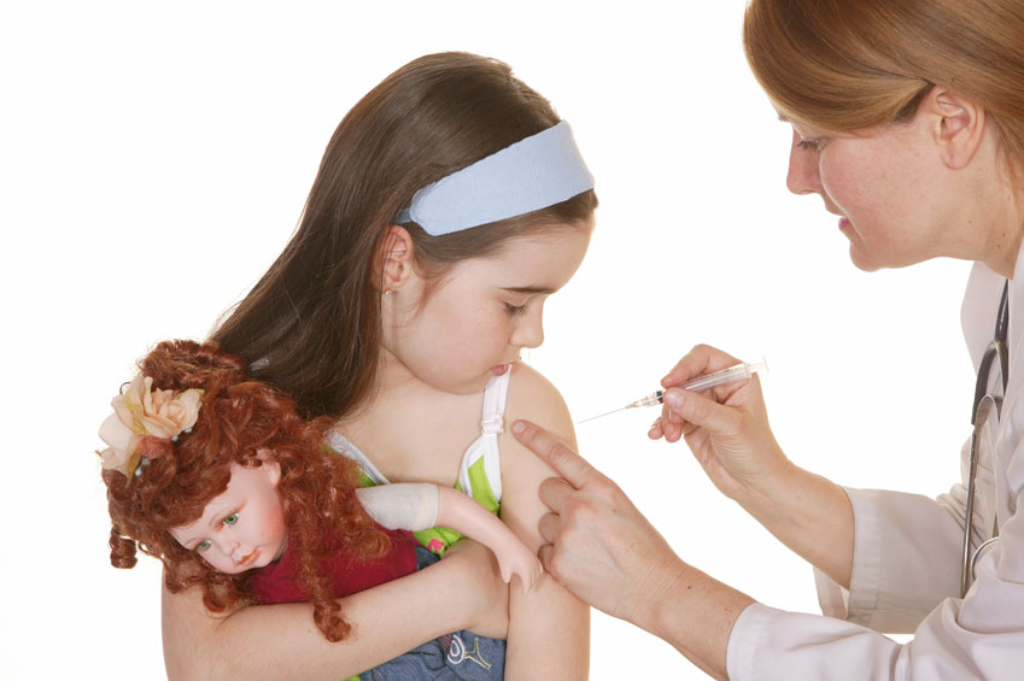 Once on a course toward being essentially eliminated in the developed world, the Measles virus is making a comeback thanks to the paranoia of the anti-vaccine movement, with the latest warning signs coming from Europe:

A raging measles outbreak in Europe may be a warning sign of what could occur in the U.S. if something doesn’t change soon, experts say.

So far this year, there have been 41,000 cases in Europe and 40 deaths, according to the World Health Organization. The European experience may offer a window on how quickly things can go awry when parents choose not to vaccinate their children, doctors caution.

Because measles is relatively rare in the U.S., many Americans have no idea of the disease’s frightening impact and its stunning contagiousness.

Many forget that measles isn’t just a childhood disease.

Silvia Rosetti, who lives in Rome, still has nightmares about contracting measles when she was 32 weeks pregnant in 2017. When Rosetti, now 41, was a child, measles vaccines were not required and she didn’t think about the risk of exposure when she first became pregnant. She was healthy and ecstatic at the thought of having her first child. But then she caught measles and the symptoms came on in a rush: fever, cough and congestion so bad she could barely breathe.

“The situation got worse and worse so they decided to do a C-section,” Rosetti said. “I went into quarantine for five days. I couldn’t see my baby.” Her newborn son, Nathan, was also quarantined until doctors determined he was not infected. Rosetti developed pneumonia as a complication of her measles and was so weak she couldn’t stand up.

“And I had a rash even in my eyes, so I couldn’t see anything,” Rosetti told NBC News.

Rosetti eventually recovered. Her baby, Nathan is now a year old and has gotten all his vaccinations.

“If you do the vaccination, you love yourself, you love your sons, and you love everybody,” she said. “You protect everybody. It’s not just for myself or for my son.”

Rosetti is one of the more than 2,000 people in Italy who have been diagnosed with measles already this year.

“We have a very serious situation,” said Dr. Alberto Villani, pediatric infectious disease doctor at Bambino Gesù Pediatric Hospital and the president of the Italian Pediatric Society. “People are dying from measles. This was unbelievable five or 10 years ago.”

Even in England, which had been declared free of measles by the World Health Organization a year ago, cases are surging.

The reason, experts say, is that in Europe, many parents have opted to skip vaccinating their children. “It’s the main factor leading to the outbreaks,” said Anca Paduraru of the European Commission in Brussels. “It’s unacceptable to have in the 21st century diseases that should have been and could have been eradicated.”

At least 95 percent of the population must have received at least two doses of measles vaccine to prevent outbreaks, WHO said. Some parts of Europe are below 70 percent.

Many parents are unfamiliar with the havoc measles can wreak because there have been few cases in the U.S. since the vaccine became widely available, said Dr. Jeffrey D. Klausner, a professor of medicine and public health at the University of California, Los Angeles.

“People don’t see them and so they forget about them or they think the diseases don’t exist anymore,” Klausner said. “They don’t realize their child is at risk for measles meningitis, encephalitis and permanent brain damage.”

The prospect of this European re-emergence of Measles making its way to the United States is not something that can easily be dismissed. While the disease was officially declared eradicated in the United States in 2000 by the Centers for Disease Control, it has made a resurgence in recent years at a rate that has many public health officials concerned. In 2013, for example, it was reported that the number of Measles cases in the United States had hit a 17-year high. A year later, the number of cases was continuing to rise, hitting a 20-year-high by the summer of 2014. Then, in the summer of 2015, the United States recorded its first death as a result of Measles in more than a decade. The news has been equally grim in recent years, although the rate of increase in the number of Measles cases appears to have leveled off somewhat. Nonetheless, although we haven’t reached the level of problems that Europe is facing right now, it’s still the case that Measles, as well as a number of other childhood illnesses that had become increasingly rare thanks to vaccination, have made a comeback. This includes diseases such as Rubella, Whooping Cough, and others.

The reason behind this increase in previously eradicated diseases is pretty easy to figure out. During the same period that public health officials have been trumpeting the eradication or near eradication of a number of childhood illnesses, we have also seen the rise of an anti-vaccination movement built about pseudo-science, celebrity, and aided by the fact that it is very easy to spread misinformation in the age of the Internet. It was roughly around the late 90s, for example, when certain researchers and advocates began to claim that there was a link between childhood vaccines and autism. Those claims have been debunked numerous times by studies in the United States and elsewhere around the world, but that has not stopped the myth of the supposed link from being spread about the world. It’s been held, in no small part, by celebrities such as Jenny McCarthy, and more recently The Big Bang Theory’s Miyam Bialik and Clueless star Alicia Silverstone. Even Donald Trump got into the act before becoming a candidate for President, using his Twitter account to spread the myths of the anti-vaccine movement. The platform that celebrity gives people like this, along with how easy it is to share “information” that isn’t necessarily true via Email, Twitter, Facebook and the light makes combating anti-vaccine propaganda difficult at times, especially when you run up against parents who truly seem to believe that they are acting in their child’s best interests by refusing to have them vaccinated.

This movement is largely based on the claim of a link between childhood vaccinations and autism, a claimed that traces its origins back to a paper that was published in 1998 in the prestigious British medical journal Lancet. That report’s principal author, Andrew Wakefield, claimed to have found a link between autism in children and the MMR vaccine wh commonly given as part of the regular childhood vaccination schedule and is intended to vaccinate against Measles, Mumps, and Rubella. While public health officials and experts, drug companies, and many epidemiologists pushed back on that report, for the better part of a decade it stood relatively strong as the definitive word on the issue and quite obviously helped to feed parent’s fears regarding autism, a condition that medical science still doesn’t fully understand. Wakefield’s study led to anti-vaccination movements that were made popular by celebrities in the United States and elsewhere, as well as by medical cranks eager to hitch their stars to anything halfway credible. Slowly but surely, though, Wakefield’s study came to be questioned by the medical community as a whole and, in 2010, Lancet eventually formally withdrew the report. Roughly a year later, it was revealed that the original study that formed the basis for the report was fraudulent. Most importantly, in the entire 17 year period since Wakefield’s study, no other researcher has ever been able to duplicate his purported results or to find any statistically significant correlation between autism and childhood vaccinations. In 2015, a study published in the Journal Of The American Medical Association definitively found no evidence of a link between autism and childhood vaccination. Despite all of this, the anti-vaccination movement, like many other ideas that are spread on the Internet, continues to exist and it continues to have an impact on public health. Despite this, the damage was done.

While this anti-vaccination movement seems like something that would take hold among lower-income, less-educated people, the reality has been quite different. Public health authorities in some of the wealthiest and best-educated counties and cities in the United States have reported that vaccination rates in their jurisdictions are actually worse than in less-educated and poorer parts of the country. Additionally, the anti-vaccination crowd, which continues to exist notwithstanding the fact that it has been utterly repudiated by science, has also targeted immigrant groups in Minnesota and elsewhere in the country, bombarding them with anti-vaccination propaganda at a rate that is difficult for public officials to keep up with. The prospect, then, of the problems Europe is now facing coming to American shores cannot easily be dismissed, something that can easily be seen in this chart showing vaccination rates across the country: 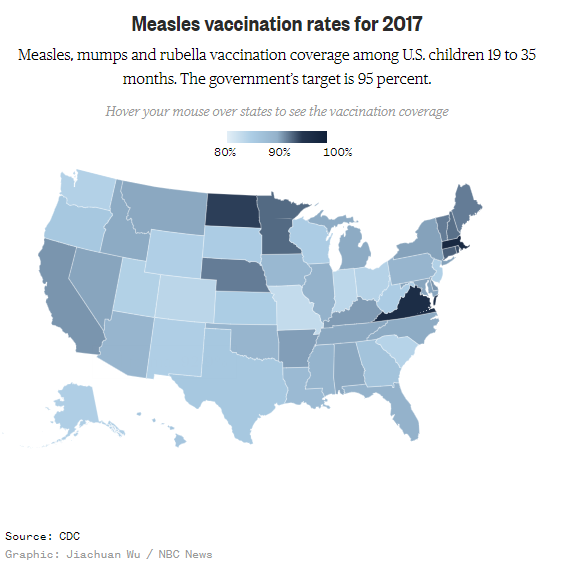 As can be seen, the vast majority of the country has vaccination rates somewhere in the 80% to 90% range, and only three states, Virginia, Massachusetts, and North Dakota reported vaccination rates at or near 100%. (You can find an interactive version of this map showing vaccination rates in each state at the NBC News link.) While this is quite good, it’s arguably not good enough, and the prospect of what could happen if rates fall even further can be seen in what is happening in Europe.