The network's longtime "strategic analyst" is "ashamed" of his association because they've become a "propaganda machine." 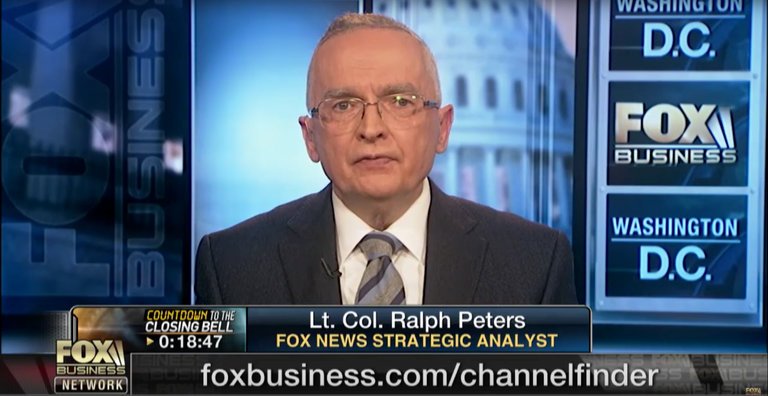 A retired United States Army lieutenant colonel and Fox News contributor quit Tuesday and denounced the network and President Donald Trump in an email to colleagues.

“Fox has degenerated from providing a legitimate and much-needed outlet for conservative voices to a mere propaganda machine for a destructive and ethically ruinous administration,” wrote Peters, a Fox News “strategic analyst.”

“Over my decade with Fox, I long was proud of the association. Now I am ashamed,” he wrote.

Peters, who was also a heated critic of Barack Obama’s foreign policy, once described him as having been “date raped” by Vladimir Putin. He didn’t respond to an email about his missive. A Fox News spokesperson didn’t immediately respond to a request for comment.

A longtime analyst for Fox News is leaving the network, saying that he could not “in good conscience” remain with an organization that, he argued, “is now wittingly harming our system of government for profit.”

In a searing farewell note sent to colleagues on Tuesday, Ralph Peters, a Fox News strategic analyst and a retired lieutenant colonel in the United States Army, castigated the network for its coverage of President Trump and the rhetoric of its prime-time hosts.

“In my view, Fox has degenerated from providing a legitimate and much-needed outlet for conservative voices to a mere propaganda machine for a destructive and ethically ruinous administration,” Colonel Peters wrote in his message, a copy of which was obtained by The New York Times.

“Over my decade with Fox, I long was proud of the association,” he added. “Now I am ashamed.”

Without citing them by name, Colonel Peters, 65, wrote that Fox News’s prime-time anchors “dismiss facts and empirical reality to launch profoundly dishonest assaults on the F.B.I., the Justice Department, the courts, the intelligence community (in which I served) and, not least, a model public servant and genuine war hero such as Robert Mueller.”

In an email interview on Tuesday, Colonel Peters wrote that his letter had been “intended for internal consumption,” adding: “I am not trying to grandstand. Fox was good to me for many years.”

He said he informed Fox News on March 1 that he did not plan to renew his contract, which expires toward the end of this month.

“As a retired military officer,” he said, “I simply could not continue with Fox in good conscience.”

While he’s naturally getting a lot of ribbing for this on social media, I take Peters at his word. Here’s the letter, as reprinted by Buzzfeed, who broke the story:

On March 1st, I informed Fox that I would not renew my contract. The purpose of this message to all of you is twofold:

First, I must thank each of you for the cooperation and support you’ve shown me over the years. Those working off-camera, the bookers and producers, don’t often get the recognition you deserve, but I want you to know that I have always appreciated the challenges you face and the skill with which you master them.

Second, I feel compelled to explain why I have to leave. Four decades ago, I took an oath as a newly commissioned officer. I swore to “support and defend the Constitution,” and that oath did not expire when I took off my uniform. Today, I feel that Fox News is assaulting our constitutional order and the rule of law, while fostering corrosive and unjustified paranoia among viewers. Over my decade with Fox, I long was proud of the association. Now I am ashamed.

In my view, Fox has degenerated from providing a legitimate and much-needed outlet for conservative voices to a mere propaganda machine for a destructive and ethically ruinous administration. When prime-time hosts–who have never served our country in any capacity–dismiss facts and empirical reality to launch profoundly dishonest assaults on the FBI, the Justice Department, the courts, the intelligence community (in which I served) and, not least, a model public servant and genuine war hero such as Robert Mueller–all the while scaremongering with lurid warnings of “deep-state” machinations– I cannot be part of the same organization, even at a remove. To me, Fox News is now wittingly harming our system of government for profit.

As a Russia analyst for many years, it also has appalled me that hosts who made their reputations as super-patriots and who, justifiably, savaged President Obama for his duplicitous folly with Putin, now advance Putin’s agenda by making light of Russian penetration of our elections and the Trump campaign. Despite increasingly pathetic denials, it turns out that the “nothing-burger” has been covered with Russian dressing all along. And by the way: As an intelligence professional, I can tell you that the Steele dossier rings true–that’s how the Russians do things.. The result is that we have an American president who is terrified of his counterpart in Moscow.

I do not apply the above criticisms in full to Fox Business, where numerous hosts retain a respect for facts and maintain a measure of integrity (nor is every host at Fox News a propaganda mouthpiece–some have shown courage). I have enjoyed and valued my relationship with Fox Business, and I will miss a number of hosts and staff members. You’re the grown-ups.

Also, I deeply respect the hard-news reporters at Fox, who continue to do their best as talented professionals in a poisoned environment. These are some of the best men and women in the business..

So, to all of you: Thanks, and, as our president’s favorite world leader would say, “Das vidanya.”

I’ve been aware of Peters for more than two decades and respected the writing he did at places like the Army War College’s Parameters back when he was a lieutenant colonel and often quoted his columns here in the early days of OTB. Over time, I came to view him as something of a crank. He’s been especially over-the-top on his view of Islam and its connection with terrorism and women in the military.

I follow several retired officers of his generation, who I either served under or similarly came to respect for their professional writing, on social media. Peters’  views are well in the mainstream of that population.

That said, while he’s a 65-year-old arch-conservative whose attitudes on some issues are antiquated, he remains, at his heart, a professional intelligence analyst. Yes, he still has a Cold Warrior’s instinctive distrust of Russia. But his analysis of Putin–and the rise of autocratic leaders elsewhere—is reasonable. He’s a defender of Gina Haspel but, not because he’s pro-torture but because he thinks intelligence officers are heroes. And, indeed, you can see his frustration with the likes of Sean Hannity in that column: “It’s bad enough that right-wing talk-show hosts stir up utterly unjustified paranoia toward our intelligence agencies (abetted by Hollywood’s lazy storylines in which villainous American spies root through our underwear). ”

Displays of military might have great appeal to those who’ve never served. And parades with miles of tanks, artillery pieces and missiles, along with massive formations of robotically drilled soldiers, produce impressive images. But the strength’s an illusion.

Whenever our adversaries, be they in Moscow, Beijing or Pyongyang, stage extravagant military parades, it makes me smile: I know that those perfect ranks smashing down their boots aren’t prepared to fight: If your priority is big parades, you’re not prepared for big wars.

As for honoring the troops, as a former private I assure you soldiers don’t take any special joy in standing in the sun for hours while the VIPs suck mimosas in the shade.
If we want to honor our troops, pass the damned defense budget.

And don’t take our already over-scheduled troops away from critical training or their families for frivolity. Not only would the sort of grand parade Trump envisions tie up tens of thousands of troops, it would paralyze staffs and logistics commands for months, play havoc with vital training and grossly misuse assets.

Of course, we’ve had big parades in the past — and worthy ones. But they weren’t displays of power but rather put our troops front and center.

Again, there’s a bit too much praetorian preening in there for my tastes. But it’s who Peters has always been.

And, while admittedly a mite slow on the uptake as to Fox News’ descent into propaganda, he’s been unafraid to part company when his analysis takes him in a different direction. See his recent columns “I’m a military man and I think we should ban assault weapons” and “It’s time to stand up to the NRA’s bullying.”

Reading the letter and scanning those recent columns, I’m persuaded that Peters legitimately intended his letter for his colleagues and that he’s genuinely ashamed to be associated with what the network has become. He’s not shocked or embarrassed that they’re partisan. He’s ashamed that they’ve followed Donald Trump in bashing institutions he holds sacred, namely the intelligence and law enforcement communities, and apologists for Russian attempts to undermine the country he loves.