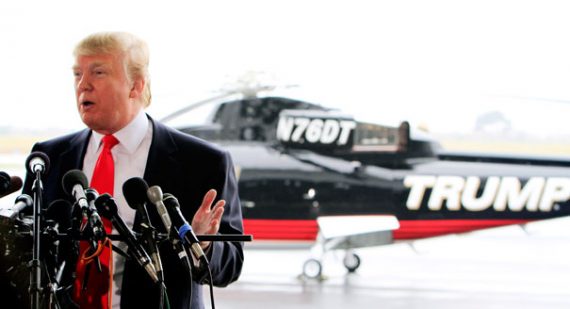 Kentucky Senator Rand Paul took a swipe at Donald Trump this morning during a breakfast speech in New Hampshire:

CONCORD, N.H. – Senator Rand Paul of Kentucky, opened a breakfast speech here Thursday at the Merrimack County Republican Committee with a new demand for proof – not of President Obama’s citizenship, but of Donald Trump’s Republican credentials.

As a bit of laughter erupted in the room, he added: “Seriously, don’t you think we need to see that?”

One day after Mr. Obama released his long-form birth certificate from the state of Hawaii – a move that was followed by Mr. Trump’s claim during a visit to New Hampshire that he believes he deserves credit for the president’s decision – Mr. Paul sought to change the subject. He gently urged Republicans to take notice that Mr. Trump has contributed money to Senator Harry Reid of Nevada, the majority leader, and many other Democrats.

“I’m going to believe it when I see his embossed seal to his Republican registration,” said Mr. Paul, a rising figure in the Republican Party who is visiting New Hampshire this week during the Congressional recess. He spoke with a smile, but his words marked one of the first times that a leading Republican has challenged Mr. Trump’s ties to the party.

Senator Paul expanded his attack on Trump after the speech:

Mr. Paul, whose primary election last spring was among the first examples of the influence of the Tea Party movement, also questioned the business acumen of Mr. Trump and his claim that he would lower gas prices by strong-arming other countries.

“He’s always complaining about the president’s education. What economic school teaches you that you can have a bully for a president who sets the prices by just telling countries what price they should charge?” Mr. Paul said. “That to me shows an economic simplicity that really may not be equivalent to the stature of being president.”

All I can say is it’s about time. The media has focused on Trump’s celebrity and his insane obsession with the birther myth, while they’ve essentially give him a free pas on everything else, including a foreign and economic policy that can only be described as insane:

As for foreign policy, Mr. Trump said he is “only interested in Libya if we take the oil,” and that if he were President, “I would not leave Iraq and let Iran take over the oil.” He remains sharply critical of the Chinese, asserting that as President, “I would tell China that you’re either going to shape up, or I’m going to tax you at 25% for all the products you send into this country.”

“I’m all for free trade, but it’s got to be fair trade,” he said. “China has taken advantage of this country for a long time.” Regarding the $300 billion he said China stands to make from trade with the U.S. this year, Mr. Trump said, “What’s protectionism? …I want to be protected if that’s the case.” As for pending trade deals with Colombia, Korea and other countries, he said he would only sign them if they were the right deals for the U.S. “If it’s a bad deal, I wouldn’t sign it,” he said.

As Daniel Drezner put it earlier this month:

predict what would happen to the global political economy if, in fact, President Trump seized all of Iraq’s oil reserves and slapped a 25% tariff on Chinese exports.  Hint:  I don’t think it ends well.

Indeed not. If Trump wants to be treated seriously as a candidate for President, and I still contend that this entire enterprise is a massive feint on Trump’s part to keep the media talking about him, then Republicans will need to challenge his idiotic ideas and his right to consider himself a Republican. Rand Paul just showed them how to do it.