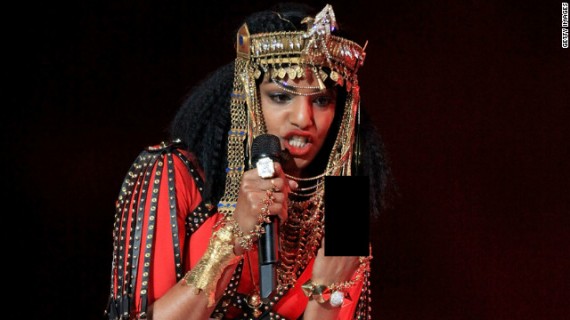 The NFL and NBC probably thought that hiring a headliner for the halftime show who was born before the Super Bowl even existed would keep the controversy to a minimum, but they were wrong:

The NFL and a major television network are apologizing for another Super Bowl halftime show.

There was no wardrobe malfunction, nothing like that glimpse of Janet Jackson’s nipple eight years ago that caused an uproar and a government scrutiny. Instead, it was an extended middle finger from British singer M.I.A. during Sunday night’s performance of Madonna’s new single, “Give Me All Your Luvin.”

In front of some 110 million viewers on NBC and uncounted others online, she flipped the bird and appeared to sing, “I don’t give a (expletive)” at one point, though it was hard to hear her clearly.

The NFL and NBC wasted little time in responding.

“The obscene gesture in the performance was completely inappropriate, very disappointing and we apologize to our fans,” said Brian McCarthy, spokesman for the NFL, which produced Madonna’s halftime show.

The risque moment came during the biggest TV event of the year. The screen briefly went blurred after M.I.A.’s gesture in what was a late attempt — by less than a second — to cut out the camera shot.

“The NFL hired the talent and produced the halftime show,” NBC spokesman Christopher McCloskey said. “Our system was late to obscure the inappropriate gesture and we apologize to our viewers.”

I was half watching the halftime show last night — although quite honestly I kind of tuned out in the beginning when Madonna came out dressed as an Egyptian Queen on a massive chariot being pulled by what appeared to be Roman soldiers — and I can’t say I even noticed this. Of course, I have no idea who M.I.A. is and wouldn’t recognize her if she was standing next to me. In any event, I have to wonder what the NFL is going to do when the Super Bowl is in New Jersey in 2014, that gesture is our official state greeting after all.

In any event, one more controversy like this and we’re likely to return to something like “Up With People.”

Here’s the video, if you care to watch: