Record 28% of American Households One Person Only

In the 1980s, Americans were bowling alone. Now, we're living that way. 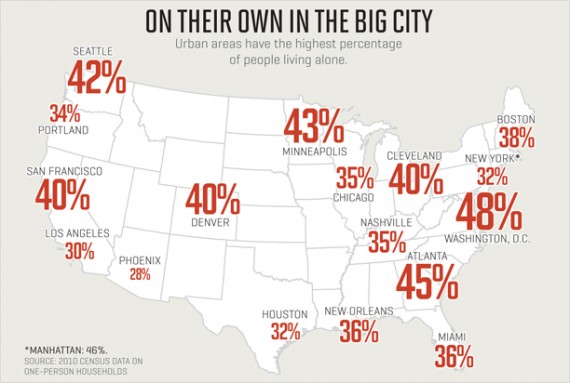 In the 1980s, Americans were bowling alone. Now, we’re living that way.

Americans are now within mere percentage points of being a majority single nation: Only 51% of adults today are married, according to census data. And 28% of all households now consist of just one person — the highest level in U.S. history. That second statistic may appear less dramatic than the first, but it’s actually changing much faster: The percentage of Americans living by themselves has doubled since 1960.

The extraordinary rise of living alone is among the greatest social changes since the baby boom. Until recently, no culture in human history had sustained large numbers of people in places of their own. Today more than 40% of households have just one occupant in cities such as Atlanta, Washington, D.C., Denver, St. Louis, and Seattle. In Manhattan, nearly 50% of households consist of a single occupant, a number that seems impossibly high until you discover that the rate is similar in London and Paris, and even higher — a staggering 60% — in Stockholm.

The article goes on to talk about the lifestyle and spending habits of the singletons, especially affluent white ones. But I find the phenomenon interesting in its own right.

While I lived alone for most of my adult life before getting married a few weeks shy of my 40th birthday, my life wasn’t the one described here:

Ironically, the 24/7 work culture, which has shattered the barriers between personal and professional life, makes living alone more attractive. After all, long work hours mean plenty of interaction at the office. Says one television producer: “I’m surrounded by a lot of people with similar interests. I do a lot of interacting, talking, e-mail, bopping down the hall to discuss a story or just shoot the shit.” His work friends are his most common companions.

Although pundits worry that singletons become socially isolated, for most the reverse is true. Young urban professionals struggle more with avoiding the distraction of social activity than with being disconnected. Surprisingly, the middle-age singletons I interviewed, most of whom are divorced, express similar concerns: They reported that living alone has become intensely social — not only because of the Internet and online dating, but also because they live in places filled with people in the same situation who are eager to be with each other.

This is, I suspect, true of only a small subset of the single: affluent folks living in major urban areas. Then again, these areas do have the highest concentration of singletons.