Egypt's President Hosni Mubarak is expected to step down after 17 days of pro-democracy protests. 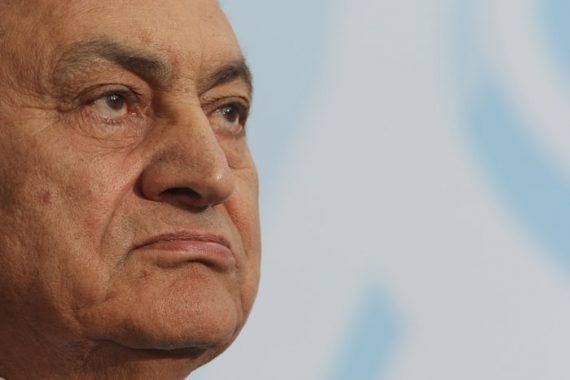 MSNBC is reporting some massively important news out of Egypt:

Following an all-day meeting of the country’s supreme military council, the army said all the protesters’ demands would be met and a further statement was expected to be made later Thursday, clarifying the situation.

Mubarak was expected to formally announce his departure in an address to the nation tonight.

NBC News said a high-ranking source inside the president’s office said that Mubarak would step down and the newly appointed vice president, Omar Suleiman, would take over. This was then confirmed by a second source.

So, the protesters win. At least the first part of the battle.

I’ll leave this post open for updates since this will likely be the big news of the day.

Update: The New York Times reports that the Army is playing a central role in this change of power:

CAIRO — The command of Egypt’s military stepped forward Thursday in an attempt to end a three-week-old uprising, declaring on state television it would take measures “to maintain the homeland and the achievements and the aspirations of the great people of Egypt” and meet the demands of the protesters. The development appeared to herald the end of President Hosni Mubarak’s 30-year rule.

Several military leaders and officials in Mr. Mubarak’s government indicated that the president intended to step down on Thursday. Some reports said he aimed to pass authority to his hand-picked vice president, Omar Suleiman, but what role Mr. Suleiman would play in a military government, if any, remained uncertain.

In testimony before the House Intelligence Committee, C.I.A. Director Leon E. Panetta said that there was a “strong likelihood” that Mr. Mubarak would step down by the end of the day. State television said Mr. Mubarak will appear tonight with an announcement.

The character of the military’s intervention and the shape of a new Egyptian government remained uncertain. A flurry of reports on state media on Thursday indicated a degree of confusion — or competing claims — about what kind of shift was underway, raising the possibility that a competing forces did not necessarily see the power transfer the same way.

Ahead of the military’s formal announcement on state television, the military’s chief of staff, Sami Anan, made an appearance in Tahrir Square, where he pledged to safeguard the people’s demands and their security. Thousands of protesters roared in approval.

Gen. Hassan al-Roueini, military commander for the Cairo area, also appeared in Tahrir Square and told the demonstrators, “All your demands will be met today.” Some in the crowd held up their hands in V-for-victory signs, shouting “the people want the end of the regime” and “Allahu akbar,” or “God is great,” a victory cry used by secular and religious people alike.

The moves marked a decisive turn in an uprising that has brought hundreds of thousands into the street in the most sweeping revolt in the country’s history. So far, the military has stayed largely on the sidelines, but Thursday’s statement suggested it worried that the country was sliding into chaos. The military called the communiqué “the first statement of the Supreme Council of the Armed Forces,” strongly suggestive that it had arranged to take power in Egypt.

So, basically what we’ve got is a military coup with the promise of a democratic transition in the future. Whether that’s how it turns out remains to be seen, of course, but it seems clear that this is turning out the best it could so far under the circumstances.

Update [Steven Taylor]: Those interested in live coverage from Egypt, the BBC World Service is currently reporting on the subject.  Live streaming here.