Republicans Need To Ask For A Mandate

If Republicans stick to their current (apparent) game plan and just run on not being Democrats, they will have neither a mandate to repeal Obamacare, et al, nor the will.

Assuming (as I do) that the GOP will take at least the House, and possibly the Senate, the party must run on specific proposals in order to garner the leverage necessary to roll back the last few years of Democratic excesses. If they stick to their current (apparent) game plan and just run on not being Democrats, they will have neither a mandate to repeal Obamacare, et al, nor the will. 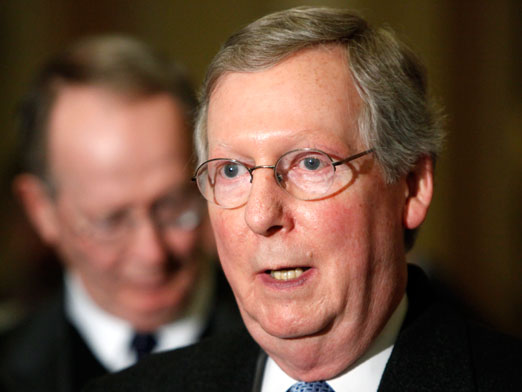 Unfortunately, despite a series of “Establishment” Republicans being sent packing by the base, all the signs so far indicate that McConnell and Co. just want to get their power back, not to actually do anything with it. Boehner’s been better, but the resistance to campaigning on a theme of, say, Paul Ryan’s Roadmap is unmistakable. The party need not endorse the specifics of Ryan’s plan in every particular to set forth a plan of action along those lines.

Gov. Chris Christie specifically ran on reforming the budget, regulatory regime, public pensions, and education. And he’s managed to make major strides toward all of those goals while maintaining an approval rating above 50%. He had the guts and foresight to tell New Jersey voters what he was going to do and his opposition can’t ignore the fact that they endorsed his plans.

Campaigns run on vague promises and throwing out the other side don’t tend to create that kind of political capital. Barack “I Won” Obama is not Bill Clinton. He’s considerably more ideological and therefore unlikely stick his finger in the wind, declare the era of big government over again, and triangulate. The only way to get past his veto pen is to have the stiff breeze of an explicit endorsement of the electorate at our backs.

Republicans lost their legislative majorities in large part because the base was disgusted with GOP profligacy and stayed home in 2006. Now the Democrats have overreached, thumbing their noses at the electorate’s mood to ram through unpopular, deeply ideological legislation. If there was ever a time when the voters would support cutting the size of government, it’s now. But to actually be able to do anything substantive toward that end, the GOP has to have been expressly given a mandate to do so. Which means they have to ask for it.