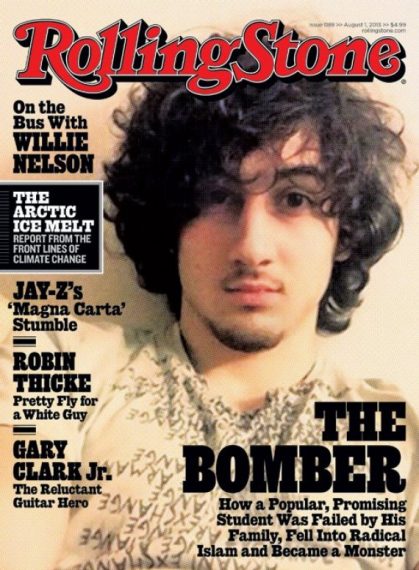 Some are expressing offense over the latest Rolling Stone cover:

Boston Marathon bombing suspect Dzhokhar Tsarnaev is on the cover of the latest issue of Rolling Stone magazine, a decision that has sparked a negative reaction online.

The cover, a position normally occupied by rock stars and figures in pop culture, is set to accompany a profile of the one-time UMass Dartmouth student who went to high school in Cambridge.

An online post at RollingStone.com about the cover contained more than 1,000 comments, many of them criticizing the decision. On the magazine’s Facebook page, an image of the cover had generated over 10,000 comments, a number of them expressing outrage.

Asked by reporters for reaction to the cover, Governor Deval Patrick said he had heard the article was good journalism, but that he found the cover distasteful.

Tedeschi Food Shops, a convenience store chain with locations in Boston, announced on its Facebook page Wednesday that it will not carry the issue of Rolling Stone in its stores.

“Tedeschi Food Shops supports the need to share the news with everyone, but cannot support actions that serve to glorify the evil actions of anyone,” said the post on the company’s page.

The cover story, “Jahar’s World,” reveals that Tsaranev played down his Muslim faith in high school, once told a friend that terrorist attacks could be justified, and may have been willing to surrender during a standoff in Watertown on April 19 because of a plea from a former wrestling coach

Additionally, CVS, which is based out of New England, has said that it will not be selling this issue of the magazine in its stores.  The story itself does not appear to be available online at this time.

Rolling Stone is no stranger to controversy, of course. Even back during its heyday when it was really much more of a music publication, it put Charles Manson on the cover in connection with a story about his crime spree, although Manson seemed interested in plugging his album. I suppose one could make an argument that it’s still too soon after the bombings for something like this, and I can certainly understand why retailers in the Boston area would be reluctant to stock this particular issue of the magazine. At the same, though, journalism is often provocative and one doesn’t get the impression from descriptions that the article makes Tsarnaev out to be some kind of hero or victim.

So, what’s the consensus? Too soon, or much ado about nothing?