Mitt Romney's 2011 tax return has "USA" in the space for "Foreign country name." Requests for his birth certificate will surely follow. 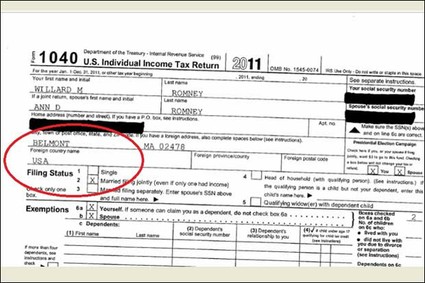 Mitt Romney’s 2011 tax return has “USA” in the space for “Foreign country name.” Requests for his birth certificate will surely follow.

US News (“Mitt Romney Calls U.S.A. a ‘Foreign Country’ in His Tax Returns“):

When the former Massachusetts governor released his official 2011 tax return Friday, he (or whoever actually filled out the form) appeared to have mistakenly referred to the United States as a foreign country.

“If you have a foreign address,” the tax return instruction reads, “also complete spaces below.” In the space below, under “foreign country name,” Romney’s form reads “USA.”

Several tax preparers confirmed to Whispers that “USA” should not have been written in that line—assuming the Republican presidential nominee is actually a citizen of the United States.

The fact that it says “Foreign country” makes that rather obvious without reading the instructions.

What’s odd here isn’t that the mistake was made—who among us hasn’t filled out a form by rote and screwed it up?–but that, since I’m quite sure Romney hasn’t filled out his own tax return in decades, it was almost certainly made by a very expensive accountant. You’d think they’d have the top block of the 1040 down pat.