A new ground game in Iowa? 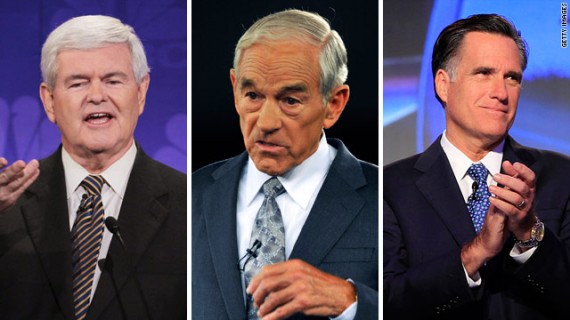 Hot off the presses from Public Policy Polling is a new poll which seems to indicate a major collapse in Newt Gingrich’s support in Iowa:

Newt Gingrich’s campaign is rapidly imploding, and Ron Paul has now taken the lead in Iowa.  He’s at 23% to 20% for Mitt Romney, 14% for Gingrich, 10% each for Rick Santorum, Michele Bachmann, and Rick Perry, 4% for Jon Huntsman, and 2% for Gary Johnson.

Paul’s ascendancy is a sign that perhaps campaigns do matter at least a little, in a year where there has been a lot of discussion about whether they still do in Iowa.  22% of voters think he’s run the best campaign in the state compared to only 8% for Gingrich and 5% for Romney. The only other candidate to hit double digits on that question is Bachmann at 19%. Paul also leads Romney 26-5 (with Gingrich at 13%) with the 22% of voters who say it’s ‘very important’ that a candidate spends a lot of time in Iowa.  Finally Paul leads Romney 29-19 among the 26% of likely voters who have seen one of the candidates in person.

Paul’s base of support continues to rely on some unusual groups for a Republican contest.  Among voters under 45 he’s at 33% to 16% for Romney and 11% for Gingrich.  He’s really going to need that younger than normal electorate because with seniors Romney’s blowing him out 31-15 with Gingrich coming in 2nd at 18%. Paul is also cleaning up 35-14 with the 24% of voters who identify as either Democrats or independents. Romney is actually ahead 22-19 with GOP voters.  Young people and non-Republicans are an unusual coalition to hang your hat on in Iowa, and it will be interesting to see if Paul can actually pull it off.

Romney’s vote share is up 4 points from a week ago to 20% from it previous 16% standing. His favorability numbers have improved a little bit as well from 48/44 to 49/40. One thing Romney really has going for him is more room for growth than Paul.  Among voters who say they’re not firmly committed to their current candidate choice, Romney is the second choice for 19% compared to 17% for Perry, 15% for Bachmann, and only 13% for Paul.   It’s particularly worth noting that among Gingrich- who seems more likely to keep falling than turn it around- voters, he’s the second choice of 30% compared to only 11% for Paul.

In addition to having more support right now Paul also has firmer support (73% solidly committed) than Romney does (68% solidly committed.) But at the same time Romney appears to have more room for growth, which could allow him to overtake Paul in the last two weeks.

The idea of Ron Paul in first place in Iowa is likely to draw a lot of attention over coming days, but it’s the Gingrich numbers that are really the most fascinating. Over the course of three weeks he’s gone from the seeming prohibitive leader in the Iowa Caucuses to third place. And, it’s not just one single poll showing Gingrich’s collapse, as the RCP polling chart shows:

If these trends are an accurate reflection of  voter sentiment. then they would indicate that Gingrich has followed the same path as all the other contenders that have arisen since this race started in earnest in August, a swift and sudden rise, followed by a sudden fall.

This should not come entirely as a surprise, of course. Just last week, we saw Ron Paul pull to within one point of Gingrich in the PPP poll, and that was before yet another week of fails strident attacks on Gingrich from Paul, Romney, Perry, and Bachmann. Additionally as I noted last week and just this morning, there were already signs that Gingrich’s support was starting to slip, although nothing to indicate that the slippage was quite this extreme. In the PPP poll, Gingrich slipped from 22% down to 14%. Paul, meanwhile, ticked up slightly and Mitt Romney jumped up from 16% to 20%. With the exception of Paul’s 1 point up-tick, all of these moves were outside the margin of error.

Obviously, this is just one poll so we’ll need to see if this is replicated in other results, of course,  but for the moment it looks like the negative campaign against Gingrich, of which Paul and Romney have been the primary instigators on Iowa television, is working. Whether Gingrich is able to reverse this remains to be seen.