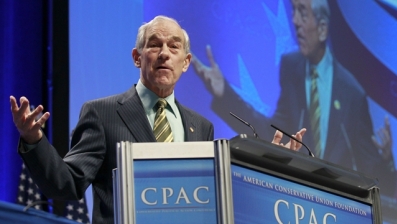 Rep. Ron Paul, R-Texas, whose outspoken libertarian views and folksy style made him a cult hero during two previous presidential campaigns, will announce on Tuesday that he’s going to try a third time.

Sources close to Paul, who is in his 12th term in the House, said he will unveil an exploratory presidential committee, a key step in gearing up for a White House race. He will also unveil the campaign’s leadership team in Iowa, where the first votes of the presidential election will be cast in caucuses next year.

Paul, 75, ran as the Libertarian Party candidate in 1988, finishing with less than one half a percent of the vote. After more than a decade as a Republican congressman, Paul gave it another shot in the 2008 presidential election, gaining attention for being the only Republican candidate calling for the end to the war in Iraq and for his “money bomb” fundraising strategy, which brought in millions of dollars from online donors in single-day pushes.

Paul took 10 percent of the vote in the Iowa caucuses and 8 percent in New Hampshire’s primary. He finished second, with 14 percent of the vote, in the Nevada caucuses, and eventually finished fourth in the Republican nominating process with 5.6 percent of the total vote. Paul’s campaign book, The Revolution: A Manifesto also reached No. 1 on The New York Times best-seller list in 2008.

This would seem to be an ideal year for Paul: Since the last election, the Republican Party has moved much closer to his view on deficit reduction, which made him an early tea party favorite. All of the party’s top-tier presidential hopefuls are focusing on lowering debt, government spending, and tax rates, issues Paul has long advocated.

Another bonus: With Donald Trump and Michelle Bachmann potentially in the race, too, he won’t seem particularly crazy this go-round. Still, there’s no way in hell he gets the nomination.