A discussion that has been going on for a while among the tech bloggers and Twitterati is the idea that RSS (Real Simple Syndication) is dead.

A study published last October found that 78% of U.S. online adults did not use it and only 19% of those who didn’t had any interest in using it in the future.  Then again, as Paul Banas noted, “If I were to survey US consumers right after World War II on whether they think they would use a television, and for those who don’t, do they think they would in the future, I’d probably get roughly the same data back as Forrester got on RSS.” Indeed, recall Ken Olsen’s classic 1977 statement that “There is no reason for any individual to have a computer in his home.”

The more recent evolution of the debate is not so much about widespread adoption but that power users find RSS inefficient, preferring instead Twitter or various aggregators like Memeorandum or Techmeme.  Steve Gillmor proclaimed in May that “It’s time to get completely off RSS and switch to Twitter. RSS just doesn’t cut it anymore.”

Of course, my friends use RSS, or they used to. Pretty much every blog has an RSS feed, and aggregators like TechMeme spider RSS feeds as well as the original pages on the sites. I’ve wired up TCIT, the Gillmor Gang feed, and my YouTube feed on my FriendFeed, but that’s FriendFeed using RSS, not me. I believe FriendFeed outputs RSS, but I don’t use it.

RSS changed the way we processed information, by turning search into push and content into people. Before RSS, I patrolled the Web for news. Information didn’t exist until I found it. RSS let me identify people likely to write interesting things, and soon I stopped looking and switched to receiving. In this world, partial feeds were irritating, taking me out of my new pristine think tank and back to the hunt and peck methodology. Once back on the site, the goal was to keep me there, or link to partner sites.

But, as Dave Winer retorted, it’s rather silly to proclaim the death of RSS while instead using technologies that rely on RSS!

Sam Diaz revived the argument this week saying “Once a big advocate for Google Reader, I have to admit that I haven’t logged in in weeks, maybe months.”

I catch headlines on Yahoo News and Google News. I have a pretty extensive lineup of browser bookmarks to take me to sites that I scan throughout the day. Techmeme is always in one of my browser tabs so I can keep a pulse on what others in my industry are talking about. And then there are Twitter and Facebook. I actually pick up a lot of interesting reading material from people I’m following on Twitter and some friends on Facebook, with some of it becoming fodder for blog posts here.

The truth of the matter is that RSS readers are a Web 1.0 tool, an aggregator of news headlines that never really caught on with the mainstream the way Twitter and Facebook have. According to a Forrester Research study about the reach of social technologies, only nine percent of U.S. online adults said they use an RSS feed monthly, down from 11 percent the year before. By contrast, 50 percent are visiting social networking sites, up from 34 percent last year and 39 percent are reading blogs, up from 37 percent a year ago.

Although, again, YahooNews, GoogleNews, and Techmeme all merely aggregate information pushed through RSS.  Proclaiming RSS dead because you’re using it downstream is rather like proclaiming television dead because you never watch it anymore — you just TiVo everything.

Steve Rubel takes that to the next level: “Think RSS is dead? Think it’s too slow for the age of streams? Perhaps that’s true for news. But have you ever considered using Google Reader as a private database? In this screencast I will show you how I do just that.”

Which is pretty much how I’m using Google Reader these days.  There’s a ton of information out there and trying to tab through and skim every post on every blog and newspaper that I want to follow simply takes too much time and energy.   So I rely in various aggregators, aggregate my own content feeds via the Firefox Feedly plugin, keep an eye on Twitter, and use Google Reader as a research tool for fleshing out posts once I’ve come up with ideas. 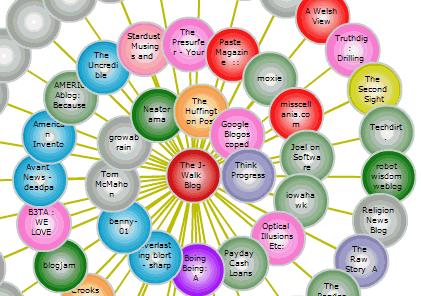