Sarah Palin’s Bus Tour: A Campaign Event, Or The Oddest Family Vacation Ever 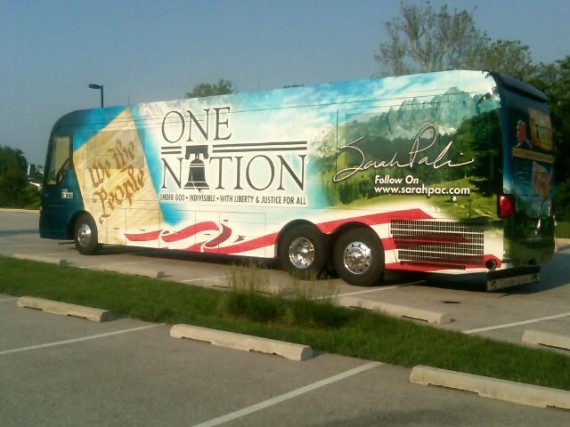 Time’s Jay Newton-Small tries to reconcile the reality of the “One Nation” bus tour with Sarah Palin’s statements:

Palin says she is not inviting media attention on her family vacation. But she’s driving around a giant bus painted with “One Nation; Sarah Palin” on the side and a banner at the back reading: Join the “Fundamental Restoration of America”. And while the rest of her family is in flip-flops and shorts, she’s dressing in candidate- style clothing: skirts and heels and jackets with tiny American and Israeli flags on her lapel. Not to mention the ready-for-TV makeup. On most of the stops, Palin hasn’t lingered: she didn’t see the slave quarters or take the cruise at Mount Vernon; she spent only 20 minutes at Fort McHenry, 30 minutes at the National Archives; under an hour at Gettysburg and Independence Hall in Philadelphia. Really, just long enough for a photo op, to answer a couple of questions from reporters and to sign some paraphernalia for supporters. And her staff is leaking to select reporters where and when she’s going next in case they lose the bus. But, really, it’s all coincidence.

Palin announced this tour and began it a week before the June 1 Federal Election Commission reporting deadline. She heavily hyped her SarahPAC website on Facebook and Twitter and on the side of the bus. Every blog post came with a plea for donations. Because showing strong fundraising ability is really important… for a private citizen and Fox News contributor. Coincidence.

She just happened to stumble upon Donald Trump along the way. And they just happened to have dinner in the most visible fishbowl restaurant on the busiest corner of New York’s Times Square – because that couldn’t possibly be designed to draw attention.

And talk about timing, she just happened to beef up her staff and buy a house in the city her staff has long mulled basing a campaign out of right before the trip. Yes, there are no coincidences in life and Sarah Palin’s really not running for President.

And yet, through it all, Fox News continues to operate under the illusion that it isn’t treating her differently than it treated Newt Gingrich, Rick Santorum, and Mike Huckabee.
FILED UNDER: Politicians, Quick Takes, Sarah Palin, US Politics