The relationship between the United States and Saudi Arabia has seen better days. 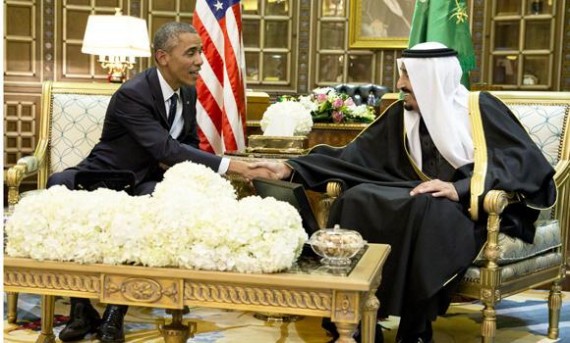 Saudi Arabia is warning the United States that it may seek to develop its own nuclear weapon if Iran gets a weapon of its own:

WASHINGTON — When President Obama began making the case for a deal with Iran that would delay its ability to assemble an atomic weapon, his first argument was that a nuclear-armed Iran would set off a “free-for-all” of proliferation in the Arab world. “It is almost certain that other players in the region would feel it necessary to get their own nuclear weapons,” he said in 2012.

Now, as he gathered Arab leaders over dinner at the White House on Wednesday  and prepared to meet with them at Camp David on Thursday, he faced a perverse consequence: Saudi Arabia and many of the smaller Arab states are now vowing to match whatever nuclear enrichment capability Iran is permitted to retain.

“We can’t sit back and be nowhere as Iran is allowed to retain much of its capability and amass its research,” one of the Arab leaders preparing to meet Mr. Obama said on Monday, declining to be named until he made his case directly to the president. Prince Turki bin Faisal, the 70-year-old former Saudi intelligence chief, has been touring the world with the same message.

“Whatever the Iranians have, we will have, too,” he said at a recent conference in Seoul, South Korea.

The Arab leader interviewed on Monday said that countries in the Gulf Cooperation Council, all to be represented at the Camp David meeting, had discussed a collective program of their own — couched, as Iran’s is, as a peaceful effort to develop nuclear energy. The United Arab Emirates signed a deal with the United States several years ago to build nuclear power plants, but it is prohibited under that plan from enriching its own uranium.

Over the last decade, the Saudi government has financed nuclear research projects but there is no evidence that it has ever tried to build or buy facilities of the kind Iran has assembled to master the fuel cycle, the independent production of the makings of a weapon.

Still, the Saudis have given the subject of nuclear armament more than passing thought. In the 1980s they bought a type of Chinese missile, called a DF-3, that could be used effectively only to deliver a nuclear weapon because the missiles were too large and inaccurate for any other purpose. American officials, led by Robert M. Gates, then the director of the C.I.A., protested. There is no evidence the Saudis ever obtained warheads to fit atop the missiles.

Obviously, nuclear proliferation in the Middle East is something that the Obama Administration, or any sane person for that matter, would rather avoid. Rather than seeing this as a sign of panic, though, it occurs to me that a good deal of what we’re seeing here is no small degree of public bravado on the part of the Saudis and others as part of an effort to extract concessions from the United States. Specifically, these parties are likely seeking some sort of security guarantees from the United States given the fact that they are now dealing with not only the threat posed by Iran but also the more immediate threat of ISIS and other radical movements that have already proven to be a serious threat to more traditional regimes in other parts of the region. In the case of the Saudis, there are also concerns about the situation in Yemen, which has led to them becoming directly involved in a ground war there that has all the earmarks of becoming a brutal, long-term affair that is likely to be a problem going forward for Riyadh. There have also been very public disagreements expressed by Saudi and other leaders regarding the proposed nuclear deal with Iran currently being negotiated in Switzerland. Ultimately, then, this is less about the Saudi’s actually actively pursuing a nuclear weapon, which would be an expensive affair that would take quite some time in any case, than it is about the Saudis and their Gulf allies trying to extract guarantees from the U.S. Whether we should actually grant those guarantees is, of course, another question.

All of this is occurring against a backdrop of what seems to be a time of a tense relationship between the United States and the nations of the Persian Gulf. This week, the President is convening a summit between the U.S. and the leadership of the Gulf nations at Camp David to discuss issues such as the rise of ISIS and Iran’s nuclear weapons, except that he’s now dealing with a very public snub. Two of the most important leaders in the region, Saudi Arabia’s King Salman and Bahrain’s King Hamad both announced this week that they would not be attending the summit, instead sending lower-ranking officials in their place. In both cases, public statements have been careful not to portray these as snubs, but it’s hard to see them any other way, especially in the case of King Salman who had previously publicly stated that he would be attending the meetings. As David Andrew Weinberg notes at The National Interest, these announcements seem to solidify the ongoing disputes between the U.S. and the Gulf states, and raise the possibility of an arms race in the Middle East that could prove to be quite problematic.