It seems that, if one ignores the first two and last two paragraphs, there’s a hidden message spelled out by the first letter of the remaining sentences. If that’s too complicated, Kevin Drum has a version with the message circled in red.

Speculation is that Schwarzenegger was sending a not-so-subtle message to bill sponsor Tom Ammiano, who yelled “You lie!” at the Governator (apparently, this practice is catching on in America’s legislative bodies) and told him to “kiss my gay ass.”

The governor’s spokesman, Aaron Lear, says this was just “a weird coincidence,” noting that other veto messages “spelled out things like ‘soap’ and ‘ear'” but ABC polling director Gary Langer doesn’t think so.

What are the odds? Here’s how not to figure it precisely, rather a quick and unsophisticated back-of-the-envelope calculation: If the odds of picking a particular letter at random are one in 26, doing it over seven selections (the number of letters in question) is (1/26)^7, or .0000000001245. Just about one in 10 billion.

This, though, admittedly is not my field. A real calculation would take into account other matters, such as the frequency with which the individual letters in question start words, the ordering odds and the chances of a line break appearing in just the right spot between the two words in question, as it does.

Stephen Green thinks this provides “one last reason to have some small amount of like left for The Governator.”  “Juvenile? Sure. But wouldn’t you rather have elected officials playing harmless pranks on one another, than doing to us what they usually do to us?”  And, indeed, Ammiano spokesman Quintin Mecke gave “Kudos to the governor for his creative use of coincidence” adding “You certainly have to have a sense of humor in politics. Unfortunately, this humor came at the cost of the Port of San Francisco.”

I suppose.  On the other hand, this is a very bizarre thing for a governor. Not least of which because it’s rather odd that someone took the time to look for hidden messages. 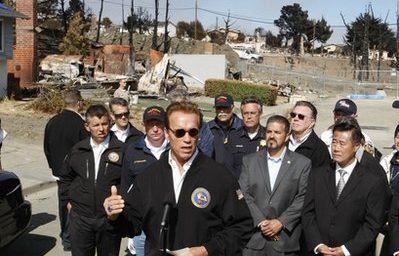