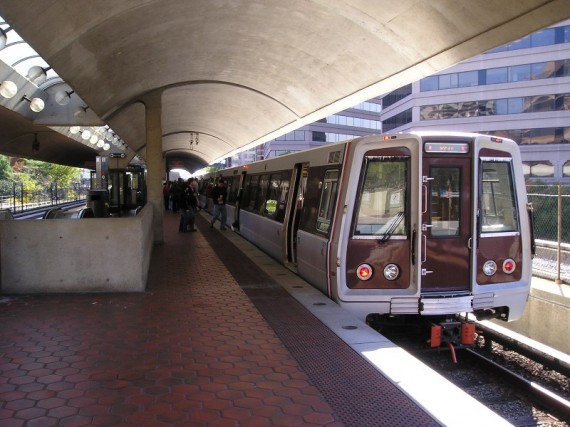 WaPo’s Breaking News Blog highlights a story that is, well, hardly breaking news:  inconsiderate people on the DC subway.  (“As Metro congestion grows, so does anger at ‘seat hogs’“)

Brooke Timmons grasped a bar in the middle of a crowded Red Line rail car and held on, looking exasperated as she tried to keep her balance while the train jerked and accelerated down the track.

On both sides of Timmons sat riders referred to on commuter Web sites as “seat hogs.” A man and woman occupied aisle seats with empty spots beside them but made no move to slide over and offer Timmons a seat.

“There is a self-centeredness about it. ‘My space is more important than you,’ ” said Timmons, 37, a lawyer from the District. “It’s epidemic” and reflects a lack of etiquette in Washington, said Timmons, who grew up in Vinita, Okla., population 6,000, where she said gentility prevailed.

As Washington’s public transit network grows more congested, with Metro projecting “unmanageable” levels of saturation on its rail system by 2020, the phenomenon of people taking up more than their share of space is becoming increasingly touchy.

“It makes me mad,” Soulman Bushera, 26, an IT recruiter in the District, said as he rode a packed Red Line train downtown one recent morning. “I ask them to move,” he said. “You find a whole aisle of them sometimes, and the one you pick gets disgruntled.”

Twitter users and commenters on transit blogs such as Unsuck DC Metro frequently sound off about people who place purses, briefcases, feet or wet umbrellas on seats next to them in jammed trains.

“This is one of my favorite kinds of Metro riders. It’s bad enough that she’s doing the ‘sit-on-the-outside-seat-so-no-one-will-try-to-sit-next-to-me,’ but she’s also got her filthy foot on a seat,” “Amanda” said in a blog post. “Several people were standing, including myself.”

First, the “seat hog” phenomenon described here conflates two very different forms of behavior: Sitting in the aisle sit when there are empty seats next to you and taking up more than one seat. The former, I would submit, is no more a violation of social decency than selecting an aisle seat when booking an airline flight. The latter, especially in the form of wet unbrellas and shoes on the seat, is obviously rude. (Putting one’s briefcase in an empty seat on an uncrowded train is, in my judgment, permissible. But it’s incumbent upon you to remove it when the train becomes crowded.)

A quick perusal of the seathogs.com site is rather amusing.  Some of the people are indeed aggregation violators.  But look at the woman in the most recent post (“DC Metro Queen Chills Inside Castle Walls”) as of this writing: 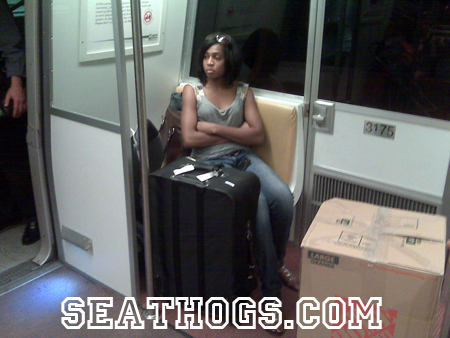 I’m not sure what it is she’s supposed to do.  In a perfect world, she’d move her giant suitcase and big ass box (assuming both are actually hers) in a car.   But she probably doesn’t have a car.   I suppose she could stand, thus freeing up a seat.   But her box and giant luggage would still be in the way.

Second, as Matt Yglesias points out, this is mostly a capacity issue rather than a case of man’s inhumanity to man. People are naturally going to try to claim a little bit of territory for themselves in crowded situations.  Yes, people should look out for others, offering to let people without a seat sit next to them in an inside seat and moving their crap out of the way.  But if Metro is so crowded that a handful of empty but not accessible seats is causing outrage, it’s time to add more trains.