The sixth year of a presidency leads to some predictable commentary (and some comparative notes). 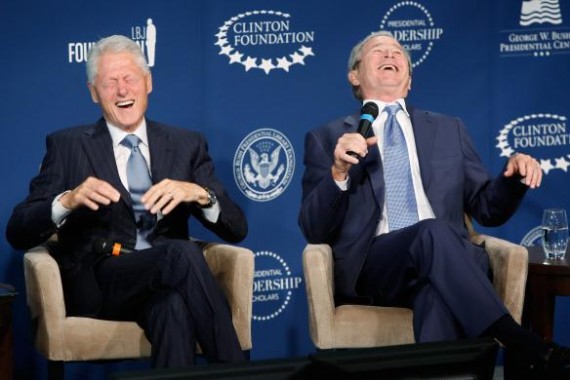 (Yes, the photo I picked for the post is a bit silly, but somehow it struck me as appropriate).

Writes James Mann in the NYT (Obama Isn’t Finished Yet):

What we’re left with, then, is what we have today. Second-term presidents will almost inevitably look as if they are a spent force by the sixth year of their administration. And yet, despite our waning attention, there is still a very important, perhaps vital, chapter of history to be written.

Many will read this as an attempt to boost the current occupant of the White House (well, some partisans will).  I see it as a simple statement of fact.  Commentators (supporters and detractors alike) tend to start writing-off presidents at about this time in their administrations.  However, Mann correctly notes:

Reagan’s most significant diplomacy with Mikhail S. Gorbachev, which contributed to the end of the Cold War, took place in his final two years. In Mr. Clinton’s final two years, he paved the way for China’s entry into the World Trade Organization, cementing the international economic order we have today, and began military action in Kosovo without obtaining approval by the United Nations Security Council, thus setting a precedent for similar American military actions since. Mr. Bush’s last two years saw the “surge” of American troops into Iraq, altering the course of the war there; the largest financial bailout in the nation’s history; and the signing of the agreement with Iraq to remove American forces at the end of 2011.

In short, regardless of the political climate, or the seeming lame-duckness of  it all, presidencies aren’t over until they are over (indeed, as I type this I am listening to a story about US military strikes against ISIS in Syria and Iraq.  For good or ill one cannot discount the significance of the policy choices in questions—and the consequences of these decisions will, no doubt, radiate beyond the Obama administration).

A main thing that made me comment on this column was the following:

Over the past few months, some commentators have reacted to the perceived decline in the Obama presidency by calling for changes in the system. Lawrence H. Summers, who was a Treasury secretary under Mr. Clinton and an economic adviser to Mr. Obama, recently floated the possibility of a single six-year presidential term. But even he acknowledged that a single term would mean that the president would be a lame duck from the minute he took office.

Another cure for the second-term blues would be to abolish the two-term limit. But that’s no answer, either; there were good reasons for the ratification of the 22nd Amendment in 1947. The dangers of opening the way to a presidency-for-life may be even greater today than they were in Franklin D. Roosevelt’s era, given the vast expansion of the executive branch’s regulatory, surveillance and war-making powers.

To be honest, I have no strong views on this subject and could talk myself into any of the three options:  one longer term, no term limits, or the status quo.

One long term has the benefit, for example, of giving a given executive a known, limited term in office (and such as the proposal above, longer than four years in the job) to seek and achieve goals.  Many presidential systems in Latin America have a one term limit (or one term with the chance to sit out a term and then re-seek office, such as Chile where President Bachelet is currently serving in her second, non-consecutive five-year term).  A downside of a a single term is, of course, the total insulation of the given president from any personal electoral consequences (especially if that president is limited to only one term).  Of course, such an arrangement does not insulate a given president’s party from electoral ramifications from a given administration’s successes or failures.

Removing terms limits does create the possibility that a given president could have a great deal of influence beyond however long that person is in office.  Consider, for example, appointments to the courts or to the Board of Governors of the Federal Reserve System.  There is also the fear of electing a president for life (a la FDR). Of course, given a variety of factors, one does wonder how often a given president would seek three terms, let alone four or more (or even be able to live long enough in office to stay that long).  The main advantage here is that presidents would always be at least theoretically exposed to electoral feedback.

The two-term limit (or, really, any limit) does create a situation in which the second term has a known end (and one in which the given president need never be concerned with facing the electorate ever again).

Interestingly, the issue of what the appropriate way to go is on this question is an ongoing discussion in Latin America, which is the largest concentration of pure presidential systems in the world.  The trend in the region has been to move away from one-term limits towards allowing re-election (often for multiple terms).  Indeed, one of the more concerning trends in the region is the engineering of re-election by presidents who entered office with limits (often using dubious routes to accomplish the feat).

Since this is apropos for class this week, I compiled the following table for comparative purposes: 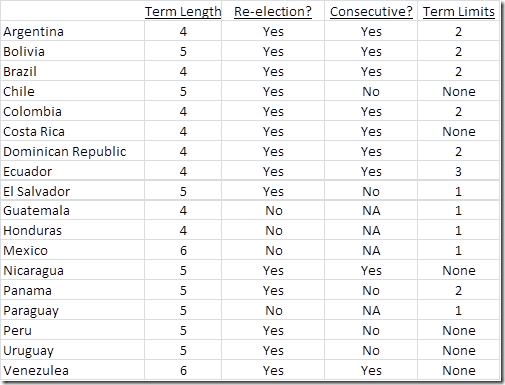 Note: Ecuador is potentially about to lift term limits.

An interesting piece on this topic can be found at openDemocracy:  Latin America: re-election and democracy.