It’s over for now:

These officials, who spoke on condition of anonymity, said the agreement would clear the way for yes-or-no votes on some of Bush’s nominees, but make no guarantee.

Under the agreement, Democrats would pledge not to filibuster any of Bush’s future appeals court or Supreme Court nominees except in “extraordinary circumstances.”

For their part, Republicans agreed not to support an attempt to strip Democrats of their right to block votes.

Under the agreement, Texas Supreme Court Justice Priscilla Owen, nominated to a seat on the 5th Circuit Court of Appeals in New Orleans, would advance to a final confirmation vote.

Fourteen Republican and Democratic senators announced this evening they had reached a compromise designed to prevent a showdown over President Bush’s judicial nominations.

Sen. John McCain (R-Ariz.), speaking for the group of seven Republicans and seven Democrats, announced the agreement at a news conference at 7:40 p.m.

Under the deal, the Democrats agreed to accept cloture votes on three of President Bush’s judicial nominees. The Republicans pledged not to support the so-called “nuclear option” to end the ability of the minority to use filibusters to block nominees.

The group of senators, including Democrats Ben Nelson of Nebraska and Robert Byrd of West Virginia, said the Senate leadership had signaled it would go along with the compromise.

Hopefully, this issue can stay away for a while. I was among the very many Americans who could have cared less about the bickering. And, like Steve, I found both sides to be hypocritical. It was power politics, not principle, all the way through, and it frankly had me turned off most of the way.

Update: Of course, Senator McCain seems poised to reap most of the benefits. 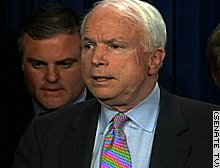 Standing with a group of 14 senators, the Arizona Republican said the seven Republicans and seven Democrats had brokered a deal to “avert a crisis” over the nominees.

Unfortunately for him, the next presidential election is still four years away. Only a small number of Americans will remember this episode then, and primary voters, who represent the biggest hump to his political aspirations, will give him few — if any — points for the moderate gesture. But at least he gets to overshadow Bush and Frist for a couple of press conferences.

Update II: Power Line thinks it’s “a hideous deal,” while Buzz Brockway exclaims: “Sell Outs!” Michelle Malkin is in agreement. So is the Daily Kos, who believes that his side has a “huge victory.”

My thinking is more in line with Steve Bainbridge:

No word yet on what “extraordinary circumstances” means, but I think this is probably a good outcome. Since I don’t believe that the GOP will control both the White House and the Senate for the rest of time, I’m glad to see the filibuster preserved as an option. There may come a day when conservatives need that tool.