Federal investigators concluded that Sen. Richard C. Shelby (R-Ala.) divulged classified intercepted messages to the media when he was on the Senate Select Committee on Intelligence, according to sources familiar with the probe.

He wasn’t just on it–he was the ranking member and had been chairman until the defection of Jim Jeffords.

Specifically, Fox News chief political correspondent Carl Cameron confirmed to FBI investigators that Shelby verbally divulged the information to him during a June 19, 2002, interview, minutes after Shelby’s committee had been given the information in a classified briefing, according to the sources, who declined to be identified because of the sensitive nature of the case. Cameron did not air the material. Moments after Shelby spoke with Cameron, he met with CNN reporter Dana Bash, and about half an hour after that, CNN broadcast the material, the sources said. CNN cited “two congressional sources” in its report.

The FBI and the U.S. attorney’s office pursued the case, and a grand jury was empaneled, but nobody has been charged with any crime. Last month it was revealed that the Justice Department had decided to forgo a criminal prosecution, at least for now, and turned the matter over to the Senate Ethics Committee.

Senior officials are seldom charged for these crimes. It’s a shame: Doing so would do more to ensure the protection of classified information than any other single step.

Yesterday, Shelby’s press secretary, Virginia Davis, issued this statement: “Senator Shelby served as a member of the Senate Intelligence Committee for eight years and as Chairman for five and a half years. He has a full understanding of the importance of protecting our nation’s secrets, and he has never knowingly compromised classified information. He is unaware of any evidence to the contrary. “This matter has been under investigation for two years. The Justice Department has not taken any action other than, only recently, to refer the matter to the Senate Ethics Committee. Other than the letter from the Ethics Committee describing the subject of the reference in general terms, Senator Shelby has not been informed of any specific allegations. He looks forward to the opportunity to respond to the Committee’s concerns at the appropriate time.”

It strikes me as highly unlikely that Carl Cameron would testify otherwise had this not happened. And CNN’s running the story minutes later citing “congressional sources” is unlikely to be a coincidence, to put it mildly.

The disclosure involved two messages that were intercepted by the National Security Agency on the eve of the Sept. 11, 2001, attacks but were not translated until Sept. 12. The Arabic-language messages said “The match is about to begin” and “Tomorrow is zero hour.” The Washington Post, citing senior U.S. intelligence officials, reported the same messages in its June 20, 2002, editions.

National security officials were outraged by the leak, and moments after the CNN broadcast a CIA official chastised committee members who had by then reconvened to continue the closed-door hearing. Intelligence officials, who consider intercepted communications among the most closely guarded secrets, said the breach proved that Congress could not be trusted with classified information. But experts in electronic surveillance said the information about the NSA’s intercepts contained nothing harmful because it did not reveal the source of the information or the methods used to gather it.

Vice President Cheney upbraided the Senate and House committee chairmen in separate phone calls the next day, and White House press secretary Ari Fleischer said President Bush had deep concerns about “anything that could harm our ability to maintain sources and methods, and anything that could interfere with America’s ability to fight the war on terrorism.”

The panels’ chairmen, Sen. Bob Graham (D-Fla.) and Rep. Porter J. Goss (R-Fla.), responded immediately by requesting a Justice Department investigation into the disclosure, an unusual move that brought criticism from other members of Congress. The FBI asked 17 senators to turn over phone records, appointment calendars and schedules. The FBI probe included an interview with a staff member on the intelligence committee who said that Shelby was trying to leak the information to show the shortcomings of the intelligence community, the sources said. Shelby had called repeatedly for the resignation of then-CIA Director George J. Tenet, whom he said was not up to the job. 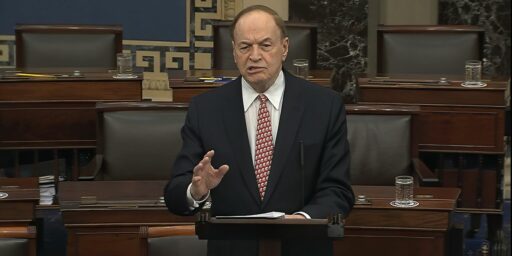 Richard Shelby and the Old Senate