Shutdown’s Impact Likely To Be Limited

While the political media is spending a lot of time talking about it, the actual impact of this latest government shutdown is likely to be limited and possibly even unnoticeable to most Americans. 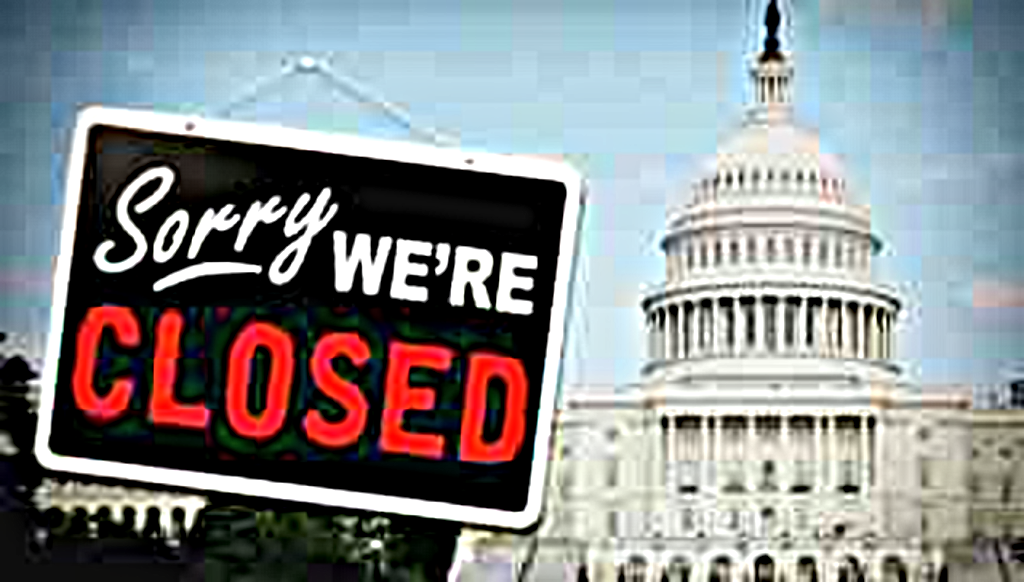 As I noted this morning, the immediate impact of this latest government shutdown is likely to be limited:

WASHINGTON — A partial shutdown of the federal government, which began early Saturday, is unlikely to make much of an immediate dent in the growth of the United States economy, but it could make life more difficult for millions of Americans in ways both big and small.

The shutdown could also contribute to the growing sense of worry on Wall Street, in part by raising fears about the ability of Congress to manage a more consequential deadline: the need to authorize an increase in government borrowing before the federal debt reaches the current limit, most likely in March.

President Trump appeared unfazed by an economic threat his critics contend is of his own making and that he initially said he would “own.”

“We are totally prepared for a very long shut down,” Mr. Trump said on Friday, as he continued to insist he would veto any government funding bill that did not include money to build a wall along the border with Mexico.

The direct economic consequences of the shutdown are modest in the aggregate. Congress has already approved funding for roughly three-quarters of the federal government, which will not be affected. Standard & Poor’s, the credit rating firm, estimates that shutting down the remainder could shave $1.2 billion off gross domestic product each week the government is closed. That is a very small fraction of the nation’s annual economic output, which will be around $20 trillion this year.

But it could inflict pain on as many as 500,000 government employees, who could be temporarily out of work during the holiday season. Those who live paycheck to paycheck or had been waiting to amass more funds before paying large bills could face a difficult choice between spending less and borrowing more.

Before the shutdown began, businesses around Washington that cater to government employees were bracing for the worst and tiring of the annual shutdown theatrics that tend to occur around Christmas.

“It costs billions of dollars every time they do this, not to mention the impact on consumer confidence every time they threaten to do this,” said Mike Brey, the owner of two Hobby Works shops in Maryland.

Mr. Brey, who is also a member of the Small Business Majority, an advocacy group, said that after a bustling Black Friday last month he had sensed that holiday shoppers were feeling anxious about the swooning stock market and the prospect of a shutdown.

“There are two things we don’t want or need this time of year,” he said. “Ice storms and consumers worried about whether they’re going to be getting their paychecks.”

Past government shutdowns have also caused scattershot disruptions to the broader economy.

The most recent prolonged shutdown, in October 2013, lasted 16 days. Some people’s lives were largely unaffected. Others were significantly inconvenienced. The beginning of the Alaskan crab-fishing season was delayed by four days, a significant setback for the region’s fishing fleet. Head Start centers serving 6,300 children closed for up to nine days. Four Nobel Prize-winning scientists were forced to shutter their government research laboratories for the duration.

Economic analysts subsequently concluded that the shutdown caused a measurable loss of economic activity in the fourth quarter of 2013. Several analysts estimated the reduction in annual economic growth at around 0.1 percentage points, costing the nation $24 billion.

An earlier pair of shutdowns also caused disruptions. From November 1995 to January 1996, parts of the government were closed for a total of 26 days. The government stopped processing requests for tourist visas, costing airlines millions of dollars in lost revenue. The courts suspended work on 3,500 bankruptcy cases, leaving financial lives in limbo. The National Park Service estimated that seven million people were forced to postpone or forgo visits to a national park.

Although the government experienced two shutdowns earlier this year, S&P notes that such a closing could be more precarious this time around because the fiscal stimulus of the $1.5 trillion tax cuts that Congress passed last year is starting to fade.

An earlier pair of shutdowns also caused disruptions. From November 1995 to January 1996, parts of the government were closed for a total of 26 days. The government stopped processing requests for tourist visas, costing airlines millions of dollars in lost revenue. The courts suspended work on 3,500 bankruptcy cases, leaving financial lives in limbo. The National Park Service estimated that seven million people were forced to postpone or forgo visits to a national park.

Although the government experienced two shutdowns earlier this year, S&P notes that such a closing could be more precarious this time around because the fiscal stimulus of the $1.5 trillion tax cuts that Congress passed last year is starting to fade.

One of the main reasons for the limited impact of this shutdown is the fact that it is only impacting roughly one-quarter of the Federal Government. Several of the largest segments of the government, including the Defense Department and other “essential” segments of the government have already been fully funded through the end of the current Fiscal Year in September due to the fact that Congress had already approved and the President has already signed into law Appropriations Bills covering several departments of the Federal Government, including the Defense Department and Congress. The major Cabinet Department that is being affected by the shutdown is the Department of Homeland Security, which is why the issue of funding for the President’s border wall is still an issue since this is an item that falls within the purview of that department. What this all means, though, is that a large number of Federal workers and contractors are not going to feel any impact at all from the shutdown no matter how long it lasts.

In addition to the limited scope of the shutdown, the fact that it is occurring over a holiday period means that it is likely to have a much more diluted impact than it would if it had happened at almost any other time of year. Many Americans have no doubt already tuned out of political news as they prepare for the holidays, and the fact that the Federal Government is not operating on a full schedule until next Wednesday essentially means that this shutdown will largely fly under the radar for a considerable period of time unless you happen to be one of those people who spend their spare time watching cable news or following political news online.

None of this is to excuse the shutdown, of course, or to take the pressure off of the President and Congressional Republicans who are quite clearly the cause of this shutdown. They remain culpable whether or not anyone is paying attention. At the same time, though, the fact that so many people likely aren’t paying attention is I suspect one of the things driving current behavior on Capitol Hill. The odds that anyone will pay a political price for this nonsense are pretty slim, and that means that neither side has much incentive to move off of their current position. What this suggests is that the most likely thing at this point is that this shutdown will last through the holidays and that it won’t really be resolved until the new Congress, complete with a House of Representatives that is controlled by Democrats, takes office in January.