Sitting is Killing You

Donald Rumsfeld famously worked standing up. He was on to something. 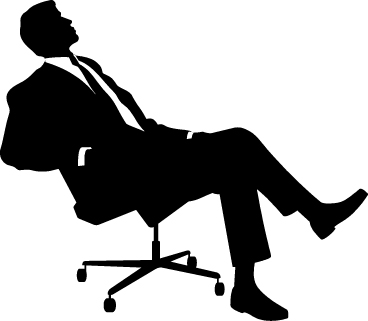 Donald Rumsfeld famously worked standing up. He was on to something.

NYT (“Is Sitting a Lethal Activity?“):

People don’t need the experts to tell them that sitting around too much could give them a sore back or a spare tire. The conventional wisdom, though, is that if you watch your diet and get aerobic exercise at least a few times a week, you’ll effectively offset your sedentary time. A growing body of inactivity research, however, suggests that this advice makes scarcely more sense than the notion that you could counter a pack-a-day smoking habit by jogging. “Exercise is not a perfect antidote for sitting,” says Marc Hamilton, an inactivity researcher at the Pennington Biomedical Research Center.

The posture of sitting itself probably isn’t worse than any other type of daytime physical inactivity, like lying on the couch watching “Wheel of Fortune.” But for most of us, when we’re awake and not moving, we’re sitting. This is your body on chairs: Electrical activity in the muscles drops — “the muscles go as silent as those of a dead horse,” Hamilton says — leading to a cascade of harmful metabolic effects. Your calorie-burning rate immediately plunges to about one per minute, a third of what it would be if you got up and walked. Insulin effectiveness drops within a single day, and the risk of developing Type 2 diabetes rises. So does the risk of being obese. The enzymes responsible for breaking down lipids and triglycerides — for “vacuuming up fat out of the bloodstream,” as Hamilton puts it — plunge, which in turn causes the levels of good (HDL) cholesterol to fall.

Hamilton’s most recent work has examined how rapidly inactivity can cause harm. In studies of rats who were forced to be inactive, for example, he discovered that the leg muscles responsible for standing almost immediately lost more than 75 percent of their ability to remove harmful lipo-proteins from the blood. To show that the ill effects of sitting could have a rapid onset in humans too, Hamilton recruited 14 young, fit and thin volunteers and recorded a 40 percent reduction in insulin’s ability to uptake glucose in the subjects — after 24 hours of being sedentary.

Over a lifetime, the unhealthful effects of sitting add up. Alpa Patel, an epidemiologist at the American Cancer Society, tracked the health of 123,000 Americans between 1992 and 2006. The men in the study who spent six hours or more per day of their leisure time sitting had an overall death rate that was about 20 percent higher than the men who sat for three hours or less. The death rate for women who sat for more than six hours a day was about 40 percent higher. Patel estimates that on average, people who sit too much shave a few years off of their lives.

Another study, published last year in the journal Circulation, looked at nearly 9,000 Australians and found that for each additional hour of television a person sat and watched per day, the risk of dying rose by 11 percent. The study author David Dunstan wanted to analyze whether the people who sat watching television had other unhealthful habits that caused them to die sooner. But after crunching the numbers, he reported that “age, sex, education, smoking, hypertension, waist circumference, body-mass index, glucose tolerance status and leisure-time exercise did not significantly modify the associations between television viewing and all-cause . . . mortality.”

Sitting, it would seem, is an independent pathology. Being sedentary for nine hours a day at the office is bad for your health whether you go home and watch television afterward or hit the gym. It is bad whether you are morbidly obese or marathon-runner thin. “Excessive sitting,” Dr. Levine says, “is a lethal activity.”

For those of us who spend most of our days in front of a computer, the news is grim. Aside from the above-listed health risks, sitting all day is a major contributor to back pain.

Stand-up desks, such as those used by Rumsfeld, Winston Churchill, and Ernest Hemingway, are gaining popularity. I haven’t tried one yet but, while they solve some problems–and many claim they increase productivity–standing up all day can’t be particularly comfortable. 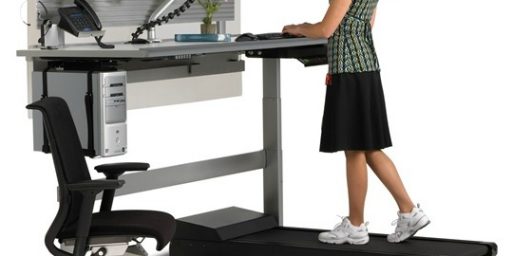 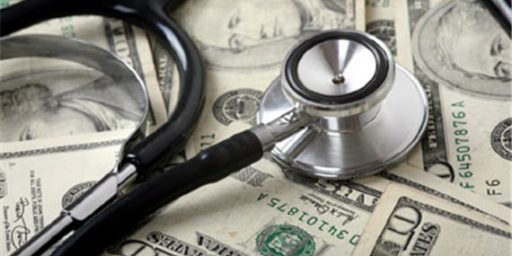