Son Of Cleveland Kidnapper Had Written About Disappearances

Perhaps the strangest piece of news to come out of the Cleveland kidnapping story so far is the fact that the son of the man accused of leading the kidnapping had written about the disappearances in an article for a community newspaper:

Here’s a strange twist in the already bizarre story unfolding out of Ohio, where three women who had been missing for the past decade were found alive in a Cleveland homelast night: The son of one of the three men arrested in connection with the case wrote an article for a local community newspaper about the disappearance of one of the girls only months after she went missing. In the process of his reporting, the son appears to have interviewed the missing girl’s mother.

Police have identified the main suspect as 52-year-old Ariel Castro, a former Cleveland school bus driver who had lived in the two-story house from which the three women were rescued since 1992. Castro and his son, now 31, share the same name, something that intially caused some premature speculation that it was the suspect himself who wrote the 2004 article for the Plain Press titled “Gina DeJesus’ disappearance has changed her neighborhood.” It turns out, however, the byline belonged to Castro’s son, Ariel “Anthony” Castro, who was then a journalism student at Bowling Green State University when he wrote the article only months after DeJesus went missing.

NBC affiliate WKYC’s Sarah Shookman did the legwork to track down the younger Castro. “This is beyond comprehension… I’m truly stunned right now,” he told her. Chuck Hoven, the editor of the community newspaper, also confirmed that Castro wrote the story for the paper as a class assignment.

There doesn’t appear to be any indication that the younger Castro had any knowledge of what his father was up to, but the coincidence is just very bizarre. I would assume that the police will investigate this matter just to be certain. 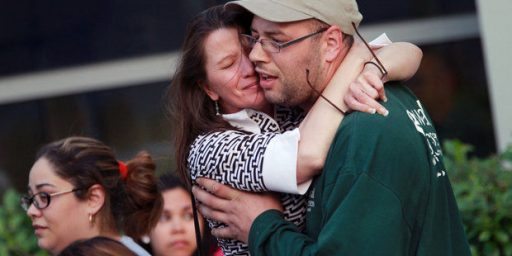