I just found out that Rob Thornton, the brother of one of my ROTC buddies (Scott Thornton) was killed in action in Iraq recently. 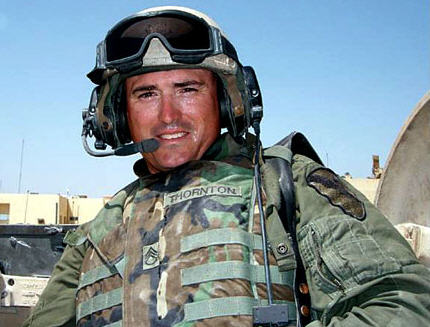 His love for tanking and soldiering leads Jones, Thomton and Weink to believe Robbie died the way wanted – on a tank, in battle. It didnÃ¢€™t matter if, as the headquarters platoon sergeant, Robbie didnÃ¢€™t need to be out there. He absolutely wanted to go out on patrol; he would act as a gunner or as a loader, sometimes for Jones, but more often than not for other tank crews, Jones said.

Late on the evening of Aug. 25, Robbie was commanding a tank during a long patrol of Highway 8, the main highway leading from Baghdad International Airport through the Al Rashid District. An insurgent fired a rocket-propelled grenade at his tank. The round hit the commanderÃ¢€™s hatch and exploded. Robbie was mortally wounded yet continued to fight until he passed out. Ã¢€œHe loved tanking that much,Ã¢€ Jones said. Ã¢€œHe was made to be in the Army and be a tanker. ItÃ¢€™s all he ever did.Ã¢€ That was his goal, said Weink, to be a tanker and Ã¢€œbe the best damned tanker there was.Ã¢€ Ã¢€œHe was always hard charging, no matter if he was in pain, he just had to be out on a tank,Ã¢€ Weink said.

Robbie was posthumously awarded the Bronze Star Medal and Purple Heart for his actions that night.

Rob’s dad was a career Air Force pilot who served in Vietnam and his brother, Scott, served as a Navy diver. I only met Rob once or twice and haven’t seen him in at least ten years. Still, I’m pretty sure he’d rather have died surrounded by his grandchildren about forty years from now rather than on that tank. Like most military leaders, though, he was willing to risk everything rather than let his soldiers down.