State Of The Union Seating: Phony Theatrics For Pointless Theater 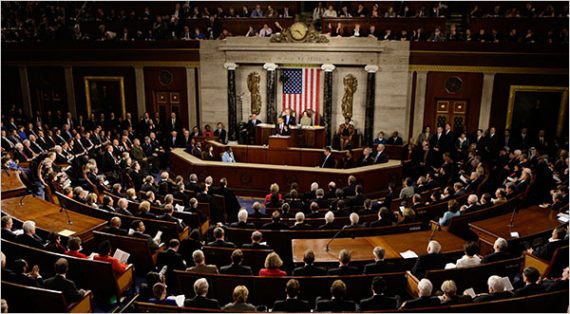 One idea that seems to have gained momentum in the week since the Arizona shootings is the idea that Republicans and Democrats should forgo the traditional practice of sitting with members of their own party for the upcoming State Of The Union Address:

Sen. Lisa Murkowski (R-Alaska) added her name to a growing list of legislators who are supporting a proposal for members of Congress to avoid the traditionally divided seating by party affiliation during President Obama’s State of the Union address later this month.

Murkowski announced on Friday that she is co-leading a bipartisan effort with Sen. Mark Udall (D-Colo.) to encourage lawmakers to sit together, regardless of party, during Obama’s speech on Jan. 25.

“The choreographed standing and clapping of one side of the room – while the other side sits – is unbecoming of a serious institution,” Murkowski and Udall wrote in an open letter to their colleagues. “And the message that it sends is that even on a night when the President is addressing the entire nation, we in Congress cannot sit as one, but must be divided as two.”

Murkowski spokesman Michael Brumas said that Udall first approached the Alaska senator about joining him in the effort.

House Majority Whip Kevin McCarthy came out in support of the plan on Friday and told reporters that he planned to sit next to House Minority Whip Steny Hoyer (D-Md.) during Obama’s speech.

Senate Majority Leader Harry Reid (D-Nev.) said on Thursday that the plan should be given “serious consideration.” House Speaker John Boehner (R-Ohio) and House Minority Leader Nancy Pelosi (D-Calif.) have not yet spoken publicly about the proposal.

The idea of mixed seating at the State of the Union isn’t new, and there have been cases in the past where one or two Congressman would sit with members of the opposing party for one reason or another, but I really don’t see the point of this proposal. It’s inevitable, for example, that Democrats will cheer some parts of the speech while Republicans will stay largely silent, and vice versa. Changing the seating arrangement would only mean that it would look different on camera, to the extent we actually would see that since the camera typically remains focused on the dais for the vast majority of the speech. I suppose it fits in with the general discussion of civility and bipartisanship we’ve been having lately, but I don’t see that it will actually do anything to advance either.

There’s nothing in the Constitution that requires the President to actually address Congress, all that Article II, Section III says is this:

Moreover, there is much to dislike about the annual spectacle that is the State of the Union Address. While it’s not quite as ridiculous as Great Britain’s absurdly monarchical State Opening Of Parliament, it nonetheless has it’s moments.

As The Cato Institute’s Gene Healy pointed out in a 2007 column, the modern State of the Union speech owes almost nothing to history. With the exception of Presidents Washington and Adams, no President until Woodrow Wilson actually delivered the annual message to Congress required by the Constitution in person:

For 112 years, presidents conformed to Jefferson’s example, until populist pedagogue Woodrow Wilson delivered his first annual message in person. “I am sorry to see revived the old Federalistic custom of speeches from the throne,” one senator lamented. “I regret this cheap and tawdry imitation of English royalty.”

Yet Wilson’s habit caught on. Most presidents in the 20th century delivered the message in person. And in 1966, Lyndon Johnson moved the speech to prime-time viewing hours, the better to reach a national audience.

Thus the State of the Union has settled into its familiar, modern incarnation: a laundry list of policy demands packaged in pomp and circumstance. And as our presidents have grown more imperial, the tone of the annual message has grown more imperious.

Not to mention the incessant interruptions for applause, partisan and otherwise, and, in an innovation introduced by President Reagan, the use of audience members to make political points of one sort or another.

Additionally, as Healy notes in a follow-up blog post, the evolution of the State of the Union has also led to an evolution in Presidential rhetoric:

As the presidency has grown more powerful over the course of American history, the content and style of the State of the Union has changed accordingly, as Elvin T. Lim documents in “Five Trends in Presidential Rhetoric,” a very interesting article [.pdf] in the journal Presidential Studies Quarterly.

Over time, presidential rhetoric has become less humble, more assertive, less intellectual, less republican (in the small-‘r’ sense of the word) and more populist. And the promises have grown ever grander and less credible. In his half-dozen SOTUs, for example, President Bush has promised, among other things to teach our children well, heal the sick, defend the sanctity of marriage, and bring democracy to the world. Last year the president pledged that, with fedgov’s help, we would “change how we power our automobiles.” (“Wood chips, stalks,” and “switch grass” may be the answer.) And this year, he’ll confirm once again that, as he put it last year, “we are on the offensive in Iraq, with a clear plan for victory.”

Healy also points to this interesting site, which has catalog every State of the Union since Washington’s in 1789 and provides a variety of statistical analysis tools:

If you’ve ever thought to yourself, “man, that speech gets dumber every year,” you’re not wrong. The latter site analyzes the SOTUs using something called the “Flesch-Kincaid score,” “which is meant to suggest the grade level in an American school for which the text is comprehensible.” That score’s declining steadily.

It’s hard not to analogize the modern State of the Union Address to the ancient British practice of the Monarch addressing Parliament and telling it what the Crown wished to accomplish. The difference in modern times, of course, is that the British Monarch is merely reading a speech prepared by aides to the Prime Ministers, whereas, American Presidents actually think they have the power to accomplish their goals. At the very least, it strikes me as a good idea to take a step toward restoring the balance between the Executive and Legislative Branches by eliminating this absurd annual spectacle.