With the economy appearing to sour, Treasury Secretary Steve Mnuchin is quickly becoming the President's latest target of criticism. 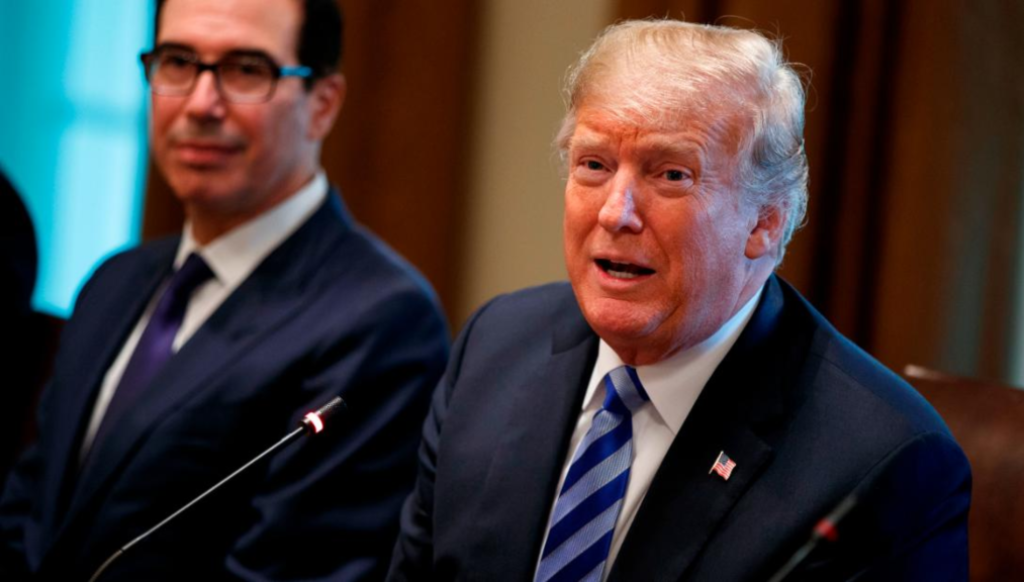 Over the past two years, the President has lashed out publicly and privately at a number of the people that he has appointed to top positions in his government and in the White House. The most notable of these, of course, have been men such as former F.B.I. Director James Comey, former Attorney General Jeff Sessions, and soon-to-be-former White House Chief of Staff John Kelly, both of whom were eventually forced out of office. Additionally, at various times he has vented in public and in private about various members of the Administration, most of whom still remain on the job. Most recently, we’ve seen him put Jamie Powell, the Chairman of the Federal Reserve Board that Trump nominated just about a year ago, in his crosshairs, claiming that the Fed’s current policy of raising interest rates is the reason the stock market has going down. Now, he appears to be venting against someone who has largely escaped his ire until now, Treasury Secretary Steve Mnuchin:

President Donald Trump’s frustration with Treasury Secretary Steven Mnuchin is ratcheting up further after markets suffered their worst Christmas Eve drop ever following Mnuchin’s attempts to calm Wall Street failed, according to a source close to the White House.

The source told CNN that Mnuchin could be in “serious jeopardy” with Trump, who regularly rages at Cabinet members he feels have made mistakes before he cools off.

Trump nevertheless vouched for Mnuchin publicly, shifting blame for the market volatility to the Federal Reserve instead.

“Yes, I do,” Trump said Tuesday when asked whether he had confidence in Mnuchin. “Very talented, very smart person.”

But the source painted a different picture of Mnuchin’s standing behind the scenes.

“Mnuchin is under the gun,” the source said.

The Treasury secretary left Washington for a Christmas holiday in Mexico’s Cabo San Lucas as the federal government shut down over the weekend, while Trump canceled his own planned trip to his Mar-a-Lago resort in Florida and remained cooped up in the White House over the holiday, absorbing a flood of negative news about the markets.

Trump could meet with Federal Reserve Chairman Jerome Powell in the new year, a person familiar with the matter told CNN Wednesday morning.

Trump has fumed at Powell for raising interest rates, which Trump believes is driving the stock market lower. Some of the President’s aides believe a face-to-face meeting could help ease tensions and allow the two men to discuss the underlying economy.

Mnuchin meets regularly with Powell and it’s not unheard of for a Fed chair to meet with the President, though it’s rare since the position is meant to be independent of politics.

Nothing has been formally scheduled. The Wall Street Journal first reported the discussions about the meeting.

At the same time in Washington, Mnuchin aides have been scrambling to find economic data to help their boss calm Trump down, but Trump was said to be unhappy with what Mnuchin was telling him, this source said.
An administration source dismissed the latest round of rumors that the secretary’s continued tenure was on the line.

“This is nonsense,” they said.

Over the weekend, the secretary spoke by phone with the President several times, including after a brutal trading day on Christmas Eve resulting in a 653-point drop in the Dow Jones Industrial Average, according to the administration source. The two men spoke on a variety of issues, including the government shutdown and an update on the status of trade talks.

Given the fact that Mnuchin has been one of the few Cabinet officials who has until now been able to dodge the President’s criticism is due largely to the fact that that the economy has been performing well during the first two years of the President’s term and that, other than a few missteps involving his use of government jets for seemingly personal travel, for which he later reimbursed the Federal Government, Mnuchin has been protected by the fact that he’s seen as the primary face of Administration economic policy. Since the economy has been doing well and Trump is getting credit for that, Trump has had little reason to attack his Treasury Secretary.

In the short-run, at least, Mnuchin’s job is probably safe notwithstanding the President’s recent complaints. The same appears to be true of Federal Reserve Board Chairman Jerome Powell notwithstanding the fact that he too has come under criticism by the President for pursuing an interest rate policy that, given the Fed’s mandate regarding monetary policy and inflation, seems entirely appropriate. That doesn’t mean that he’s entirely secure, of course. If the economy starts turning south, then Trump is going to look for someone to blame, and his Treasury Secretary would be a very convenient target under those circumstances. In the case of Sessions and Kelly, Trump was speaking negatively about them for months before finally acting. Mnuchin would be wise to keep that in mind.