The Supreme Court barred the release of police photographs of former deputy White House counsel Vincent Foster Jr.’s body today, ruling unanimously that the privacy of Foster’s family outweighs an effort to find out if his July 1993 death by gunshot was not a suicide.

Setting forth a new test to govern release of post-mortem pictures and documents held by the government, the court said surviving family members are covered by a provision of the Freedom of Information Act (FOIA) that exempts from disclosure law enforcement records that could invade personal privacy. Officials can withhold information to protect a grieving family, the court ruled, unless the requester has good evidence that disclosure might help uncover official wrongdoing.

In this case, Justice Anthony M. Kennedy wrote for the court that Allan J. Favish, a lawyer in California who believes the government covered up the true circumstances of Foster’s death, has no such evidence.

“It would be quite extraordinary to say that we must ignore the fact that five different inquiries into the Foster matter reached the same conclusion,” Kennedy wrote. Kennedy was referring to investigations by the FBI, a Senate committee, a House committee and Independent Counsels Robert Fiske and Kenneth W. Starr. Each confirmed the U.S. Park Police’s finding that Foster, who served former president Bill Clinton, killed himself in Fort Marcy Park.

The case put the court firmly on the side of grieving families in a case in which not only Favish, but also major media associations, argued for full disclosure. Citing lower-court opinions that blocked disclosure of President John F. Kennedy’s autopsy X-rays and photos and an audiotape of the Challenger Space Shuttle astronauts’ last words, Kennedy wrote sympathetically of the Fosters’ wish to “secure their own refuge from a sensation-seeking culture.”

Among the most private of government officials themselves, the nine justices united behind Kennedy’s statement that Foster’s “former status as a public official” does not diminish “the weighty privacy interests involved.”

I’m not all that familiar with FOIA case law or, indeed, the nuts and bolts of the legislation itself. But as a matter of pure public policy, this ruling seems correct. At some point, the family should have a right to protection. For that matter, Foster didn’t become a public figure in any real sense until his death. 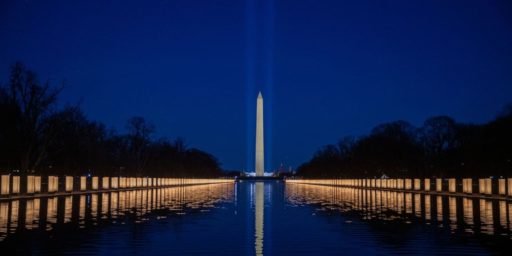