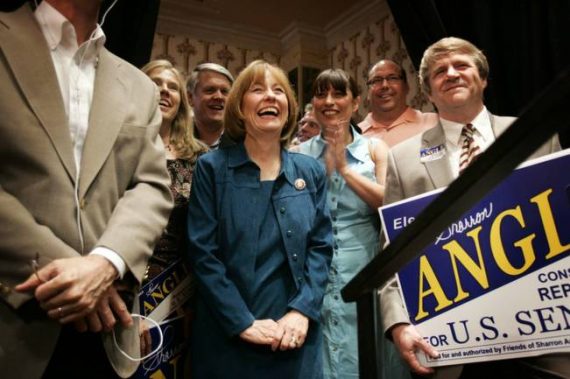 The Tea Party movement scored a substantial victory in the Nevada Senate primary yesterday, but in doing so they may have given Senate Majority Leader Harry Reid a second chance at life:

After years of maneuvering, Senate Majority Leader Harry Reid got the race he wanted.

Sharron Angle, a former Reno assemblywoman and Tea Party favorite, emerged from Tuesday’s Republican primary, lifted to a landslide by a solid base of conservative supporters but carrying political baggage that experts say gives the embattled Reid a new lease on political life.

Known as a staunch conservative, Angle now faces the challenge of appealing to the broader electorate, a task made difficult by her rigid ideology — she supports phasing out Social Security and dismantling the Education Department.

Angle’s win matches her ability to rally her base, which is solidly behind her, with Reid’s ability to do the same, as both battle for unaffiliated voters.

Angle said she would move forward with a “Coalition of the Willing” — 45 groups who would work for her election along with her two former rivals.

Angle’s victory represents a sort of coup for Team Reid, which plotted a years-long strategy to shape Nevada’s electoral landscape, necessitated in part by the senator’s low approval ratings. Most recently, his campaign played an active role in the GOP primary, hammering away on one-time front-runner Sue Lowden. The relentless attacks, compounded by the candidate’s own gaffes, caused a steep slide for Lowden, a former state senator and Nevada Republican Party chairwoman who had argued that she was the most competitive contender against Reid.

Reid is not a politician who should be written off in any respect, especially considering a campaign war chest totaling at least $ 17 million, a substantial sum for a state that essentially only has one major media market. In Angle, however, Reid seems to have the perfect challenger to go up against, as the polls have begun to indicate: 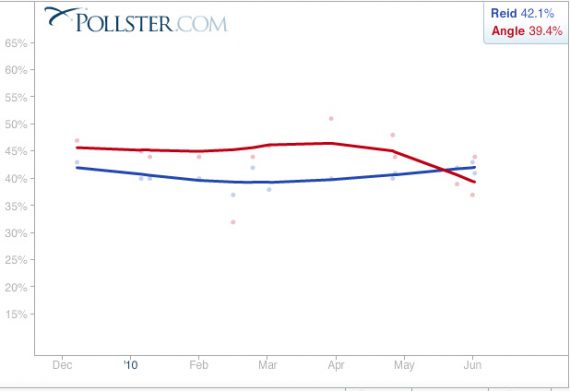 This isn’t to say that Reid is secure by any means, but he’s clearly in a far better position running against Angle than he would have been against either of the other candidates and, as Politico notes this morning, the GOP has taken a huge risk in nominating her:

By nominating Angle, Republicans have also taken a huge gamble since many believe her views – like abolishing the Energy and Education departments and privatizing Social Security – present Reid with an inviting target.

Moments after the polls closed Tuesday, Reid’s team released a document entitled “Sharron’s Wacky Angles,” highlighting a number of statements she’s made over the past dozen years, including comments questioning two working parents; criticizing unemployment insurance in this state; equating drug dealers to the 9/11 hijackers; raising concerns about alcohol legalization; and accusing her of linking breast cancer and abortion.

“I don’t think she needs to make a gaffe – I think the contrast of Sen. Reid and Ms. Angle is so evident,” said Billy Vassiliadis, a long-time Reid adviser. “A moderate who works hard for seniors, protected Social Security and Medicare versus someone who questions the existence of it.”

Sig Rogich, a veteran GOP strategist who backs Reid, said Angle was probably “the most radical candidate we’ve had for United States Senate in Nevada history.”

Which is why Harry Reid is breathing just a little bit easier this morning.