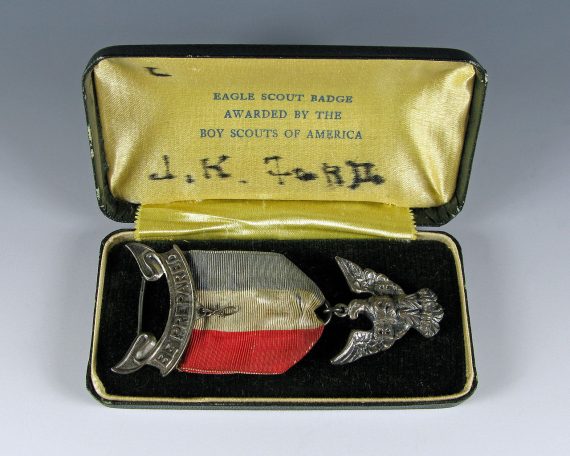 A California teenager is being denied elevation to Eagle Scout because the Boy Scouts found out he was gay:

Ryan Andresen spent 12 years as a Boy Scout. Now that he’s 17 and about to graduate from high school, he completed the final requirement to receive the Eagle Scout award, which signifies the highest rank in the organization.

Except, according to his mother Karen, when he submitted the paperwork, the scoutmaster for Troop 212 in the San Francisco Bay area told him he could not give him the Eagle Scout honor because he was gay.

His mother has started an online petition to protest the decision and it’s already gathered 143,877 electronic signatures.

“It hurts me so much to watch Ryan suffer for being who he is, because to me, he’s perfect,” Karen wrote on the petition. “Ryan has worked for nearly 12 years to become an Eagle Scout, and nothing would make him more proud than earning that well-deserved distinction.”

The Boy Scouts of America sent a statement to several news organizations, including ABCin which they say they didn’t inquireabout Ryan’s sexual orientation.

“This scout proactively notified his unit leadership and Eagle Scout counselor that he does not agree to scouting’s principle of ‘Duty to God’ and does not meet scouting’s membership standard on sexual orientation,” Deron Smith, a spokesman for the organization said in a statement. “Agreeing to do one’s ‘Duty to God’ is a part of the scout Oath and Law and a requirement of achieving the Eagle Scout rank.”

In an interview with Yahoo! News Ryan said that his scoutmaster knew he was gay.

“He had been telling me all along that we’d get by the gay thing,” Ryan told Yahoo News. “It was by far the biggest goal of my life. It’s totally devastating.”

Now, as I’ve said before when dealing with BSA issues, the Boy Scouts of America are a private organization and they’ve got every right to set whatever rules and policies they wish. I can’t help but think, though, of what they’re actually encouraging here. If Anderson had simply kept quiet about his sexual orientation, he would have likely made Eagle Scout without any problem. Since he apparently told the truth, he’s being punished for no reason other than who he is. In other words, the Boy Scouts are encouraging their members to lie. Isn’t that against the Boy Scout Oath and Law? Why yes, I think it is.