The Economist reports that "The coffee insurgency" is winning. 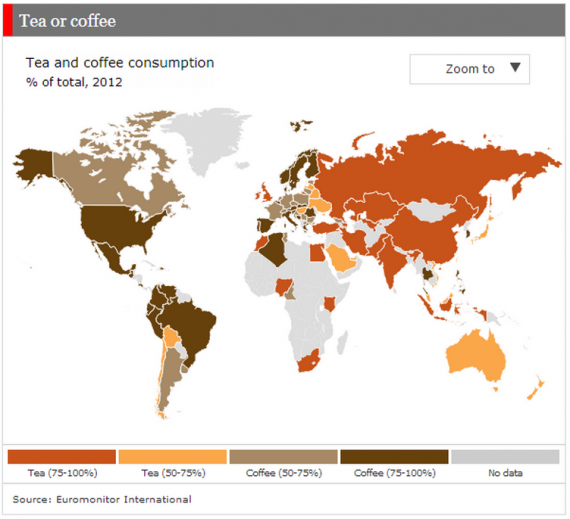 The Economist reports that “The coffee insurgency” is winning:

EXACTLY 240 years ago [December 16th], uppity colonists barely disguised as Mohawk Indians defied the crown and ruined the private property of English merchants by dumping 342 chests of perfectly good tea into Boston harbour. This illegal act, known as the Boston Tea Party, was part of a small rebellion that eventually led to independence and to today’s Tea Party movement. Americans now quaff three times more coffee than tea, according to Euromonitor, a research firm. Throughout most of the West, the bean bests the leaf. Yet the British consume three times as much tea as coffee, despite an invasion by the American Starbucks. And tea fuels the fast growth of BRICS countries (save for coffee-producing Brazil) and dominates Asia. A gentleman is hardest pressed to find a cup of tea in Guatemala, where its superior Arabica is the drink of choice 99.6% of the time. The world’s most divided nation is Australia. The sun may never set on tea—but overall, more countries prefer coffee.

Of course, like the famous county-by-county election maps that became famous after the 2000 presidential election, geography can be a distorting lens. Given the vast population of Asian countries—particularly China, India, and Indonesia—tea almost certainly remains the drink of choice of most of the world’s people.