Egyptians celebrated last night, but the future is far from clear. 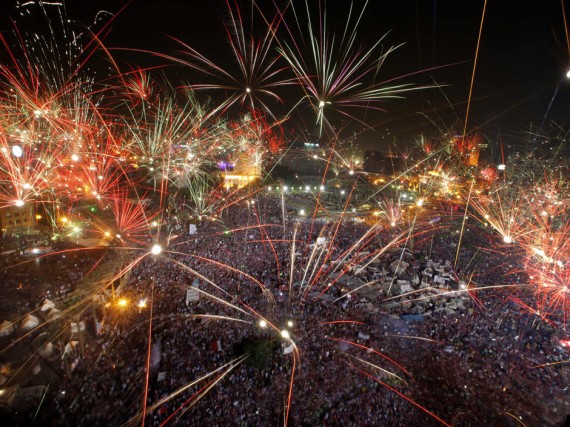 One Arabic news blog called him a “mystery man,” another said there was “little information” known about him, and the largest state-owned newspaper ran a biography that summarized his career in fewer than 150 words. As chief justice of the Egyptian Supreme Constitutional Court, Adli Mansour is set to succeed the ousted President Mohamed Morsi and lead Egypt through an indefinite interim period after taking an oath on Thursday.

With more than 20 years as deputy chief justice of the court, Mr. Mansour, 67, was named chief justice after his predecessor retired last week — on the same day that demonstrations erupted throughout Egypt calling on Mr. Morsi to step down. Mr. Mansour now finds himself in a position that may permit him to play a central role in writing the next chapter of Egypt’s tumultuous revolution. But with no prior presence on Egypt’s political or public scene, many experts said, Mr. Mansour could serve as little more than a figurehead.

“They summoned him and he responded,” Mr. El Borai said, adding that Egypt’s military will be the true arbiter of power in the coming period.

According to a road map that the military announced Wednesday, Mr. Mansour is now authorized to make constitutional declarations, form an interim technocrat government and create a committee to revise the Constitution.

According to Al Ahram, Egypt’s semiofficial newspaper, Mr. Mansour helped draft the law for presidential elections, which brought Mr. Morsi to power. And over the course of the last few months, the Supreme Constitutional Court recognized and worked with a new Constitution that was drafted under Mr. Morsi’s leadership.

“He’s not going to be making big changes or trying to rule or govern in any active sense or trying to tell the cabinet what to do,” Professor Brown said.

Which means, of course, that there will be a nice power vacuum for the military to step into, even if they only rule from behind the scenes, and most importantly itprotects the privileges that the military has become used to in the six decades since the coup that overthrew Egypt’s last King:

That deal collapsed this week.

With tanks and soldiers in the streets and around the presidential palace, the military’s top officer, Gen. Abdul-Fattah el-Sisi, did not even utter Mr. Morsi’s name as he announced that the president had been deposed and the Constitution suspended.

And suddenly, Mr. Morsi, like his immediate predecessor, Hosni Mubarak, discovered the enduring fact that the military looks out for itself above all else. It is not ideological, but is intensely politicized.

“Egypt’s military leaders are not ideologically committed to one thing or the other; they believe in their place in the political order,” said Steven A. Cook, a Middle East expert at the Council on Foreign Relations. “They are willing to make a deal with virtually anyone, and this one didn’t work out, clearly.”

While justifying its intervention in politics as serving the will of the people, the military has never been a force for democracy. It has one primary objective, analysts said: preserving national stability and its untouchable realm of privilege within the Egyptian state.

But with millions in the street opposing the president, and the Brotherhood consistently trying to consolidate its authority, the military decided that time was up on the Morsi presidency.

“We are disciplined, and we have the weapons,” one ranking officer said Wednesday, speaking on the condition of anonymity because he was not authorized to comment. “That’s what’s on the market right now. Do you see any other solid institution on the scene?”

The face of that military was General Sisi, a rakish officer, his chest full of medals, a beret pulled tight over his forehead, as he grasped a lectern with both hands and addressed his nation, insisting that the goal was to restore national unity. He played down the military’s dominance as he installed a caretaker leader.

But his words of reconciliation and healing could not alter the cold reality of the moment.

The military, for the second time in two and a half years, was ousting the nation’s civilian leader — but this time, that leader had been elected, freely and fairly. The removal underlined the armed forces’ status as Egypt’s most powerful institution since the coup six decades ago that toppled King Farouq and led to the rise of Gamal Abdel Nasser.

“There was hope,” General Sisi said in his televised address, “that there would be a national consensus to set a road map for the future and provide reasons for trust, assurance and stability for this nation, in a way that fulfills its ambition and aspiration.”

Egypt has the largest standing military in the Arab world, estimated at 450,000 troops. Most are conscripts and low-ranking officers who have little opportunity for advancement.

For decades, however, its tens of thousands of elite officers have jealously guarded their privileged station. They live as a class apart, with their own social clubs, hotels, hospitals, parks and other benefits financed by the state.

Many have also grown wealthy through government contracts and business deals facilitated by their positions. It is, in some respects, a hereditary Brahmin caste, in which sons follow their fathers’ careers and they all live inside a closed social circle.

“It is a tightly knit group,” said Robert Springborg, a professor at the Naval Postgraduate School in Monterey, Calif., and an expert on the Egyptian military. “They tend to think alike and they are a force to be reckoned with because, besides the Brotherhood, they are the only really cohesive institution in the country.”

For six decades before the revolution in 2011, military men ruled Egypt. For most of his nearly three decades in power, Mr. Mubarak, a former air force commander, largely let the military operate as it liked. But after 18 days of a mass uprising in 2011 against his rule, the military decided the deal was off. Stability was threatened. Mr. Mubarak’s long-serving defense minister, Field Marshal Mohamed Hussein Tantawi, who had been known as “Mubarak’s poodle,” ousted and jailed him.

And, now, the same thing has happened to Mohammed Morsi, and while Morsi is not likely to be put on trial it’s also unlikely that the military is going to give him very much freedom of movement. Especially not in the immediate moment while the Muslim Brotherhood he once led is still quite obviously trying to figure out its next move. Instead, he’ll likely be kept under house arrest for the foreseeable future, perhaps until they can find a country willing to both take him and keep him quiet but most likely he’ll be under some form of arrest and kept in internal exile. Meanwhile Interim President Mansour will govern the nation in name, but it seems rather obvious that the whatever political order emerges in the wake of yesterdays events will be one in which the position of the military is well-protected, and where its ability to influence the actions of the government may well be as strong as it was prior to the ouster of Hosni Mubarak. It may all end up being clothed in democracy, but the real power will lie with the military, as it has in Egypt for the better part of a century now.

Meanwhile, in the wake of yesterday’s coup, the quest to determine what it all means and what comes next has begun. At The Washington Post, Liz Sully argues  that the ouster of the Muslim Brotherhood sends a warning to Islamist movements elsewhere:

“What happens to the Islamists in Egypt will determine their status in the remaining countries of the region,” said Jordanian political analyst Labib Kamhawi. “This is making them nervous because they know that if they lose in Egypt, they will end up losing everywhere.”

It is far too early to write off political Islamas a force in the region, and the Egyptian army’s role in forcing President Mohamed Morsi’s departure sets a potentially worrying precedent for the future of democratically elected governments.

Islamist extremists, in Egypt and elsewhere, may argue that what many are calling a military coup validates the use of violence to achieve their aims. The regimes and monarchies still holding at bay the clamor for greater freedoms will cite the example of Egypt as evidence that elections that empower Islamists will lead to chaos, perhaps braking further progress toward political reform.

But there can be little doubt that the specter of the Arab world’s most populous nation rising up in seemingly unprecedented numbers against an Islamist leader has tainted the Brotherhood’s long effort to present itself as a viable alternative to the region’s mostly repressive regimes, in ways that it may find hard to redress.

“This is one of Islamism’s biggest crises in recent memory, indeed in decades,” said Shadi Hamid, director of research at the Brookings Doha Center in Qatar.

Molhem al-Drobi, a senior official with the Syrian Muslim Brotherhood, acknowledged the anxiety. “This is not what we hoped for,” he said.

Juan Cole, meanwhile, sees danger in the precedent that yesterday’s events may set:

What Rebellion and al-Sisi have done is extremely dangerous. Not only does it risk undermining the legitimacy of democratic elections, it risks discouraging Muslim religious groups from participating in democratic politics. The danger is real. A similar revocation of the results of a revolution in Algeria late in 1991 threw the country into a decade and a half of civil war that left over 150,000 dead. The ‘debaathification’ program of the post-2003 Iraqi government, which was vindictive toward former members of the Baath Party, probably helped throw that country into a low-grade guerrilla struggle that continues to this day. Egyptians who think their country is immune from such phenomena are fooling themselves.

Egypt’s future stability and prosperity now depends on whether the officer corps and youth are mature enough to return to pluralist principals and cease persecuting the Muslim Brotherhood just because Morsi was high-handed. Their media has be be free and the 300 officials have to be released unless charged with really-existing crimes on the statute books. And it depends on whether the Muslim Brotherhood is wise and mature enough to roll with this punch and to reform itself, giving up its cliquish and cult-like internal solidarity in favor of truly becoming a nation-wide, center-right, democratic opposition party. If they take this course, they have a chance of emulating Turkey’s Justice and Development Party (AKP) and one day coming back to power (an observant Muslim prime minister was forced out in 1997, but members of his party just regrouped and ultimately came to rule the country). If the Muslim Brotherhood adherents instead turn to terrorism and guerrilla actions, they will tear the country apart and probably blacken the name of political Islam for decades.

At the moment, neither of those two groups is demonstrating the maturity and high-mindedness that would reassure me about the prospects for a genuinely democratic transition.

The Brotherhood said today that it would not cooperate with the new regime at all, a statement that casts Cole’s hopes in doubt. However, we are just in the opening hours of the post-coup Egypt and its hard to say where things are going to go. It’s pretty easy to to see how they could go badly, though, and if that happens it will have consequences far beyond Egypt’s borders.