The End Appears Nigh for Mubarak

The Egyptian army has publicly ruled out a use of force. 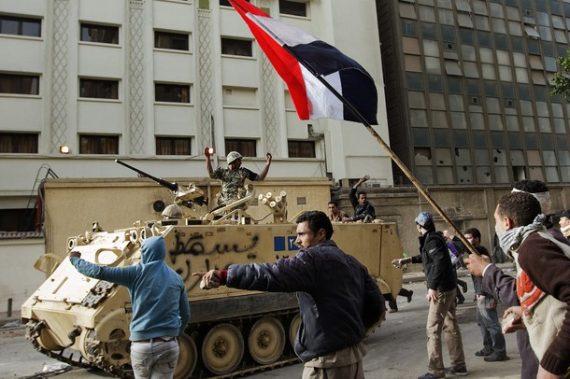 Via the BBC:  Egypt army rules out using force

Egypt’s army has vowed it will not use force against the tens of thousands of people protesting for the removal of the regime of President Hosni Mubarak.

It said it respected the “legitimate rights of the people”.

The statement comes ahead of a massive march planned for Cairo on Tuesday and amid a call for a general strike.

Al Jazeera has more of the statement:

In a statement on Monday the army said “freedom of expression” was guaranteed to all citizens using peaceful means.

“To the great people of Egypt, your armed forces, acknowledging the legitimate rights of the people,” stress that “they have not and will not use force against the Egyptian people,” the statement.

It was the first such explicit confirmation by the army that it would not fire at demonstrators who have taken to the streets of Egypt and comes a day before Tuesday’s “march of millions”.

“The presence of the army in the streets is for your sake and to ensure your safety and wellbeing. The armed forces will not resort to use of force against our great people,

“Your armed forces, who are aware of the legitimacy of your demands and are keen to assume their responsibility in protecting the nation and the citizens, affirms that freedom of expression through peaceful means is guaranteed to everybody.” the army statement said.

It urged people not to resort to acts of sabotage that violate security and destroy public and private property. It warned that it would not allow outlaws to loot, attack and “terrorise citizens”.

This is stunning and highly significant.  The regime’s ace in the hole was the chance that the military would actually fire on the protesters.  With that possibility taken off the table, the populace will only be emboldened.  Further, it is difficult to see how Mubarak can stay in power if the army is willing to publicly undermine his position, which is what they have done.  The police remain an x-factor, but at the moment it would appear that a move by the police could spark a response from the army.

The lynchpin in all of these types of circumstances is the coercive apparatuses of the state (i.e., the military and the police) and the military appears to have made their choice:  they are not willing to attack their fellow citizens on behalf of the regime.  It has been telling for days that the military has been deployed amongst the protestors without a crackdown and the statement today simply confirms their disposition.

The removal of possible military action will simply mean that tomorrow’s planned march will probably be even bigger than it otherwise would have been, as the more timid are now more likely to join in the demonstrations.  See more at al Jazeera:  Egyptians gear for gigantic protest.

Further, the following indicates that, at a minimum, Mubarak knows he is in trouble, even if the reality of the situation has not fully sunk in as yet:

See more at the NYT:  Vice President Agrees to Talk With Opposition.