Senate Republicans are pushing for the end of minority obstruction---and the Democrats can't wait. 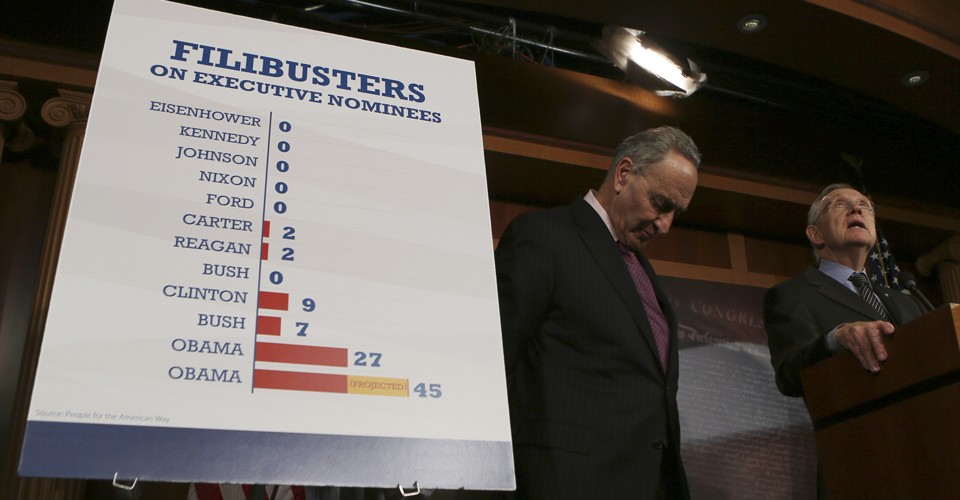 Burgess Everett, reporting for POLITICO (“Coming soon: The death of the filibuster“):

The filibuster is in peril.

With Republicans expected to change the Senate rules to slash debate time on President Donald Trump’s nominees this week, it will mark the third time the “nuclear option” — changing Senate rules by a simple majority — has been triggered in just six years.

Each of those unilateral moves by a Senate majority to weaken the Senate’s age-old precedents centered on nominations, leaving the legislative filibuster and its 60-vote threshold unscathed. But some senators say it’s just a matter of time before even that Senate institution is more or less wiped away by a majority tired of seeing its big ideas blocked.

Though the Senate is up for grabs in 2020, neither party is expected to come away with a supermajority due to the limited number of competitive races. And that likely puts the supermajority requirement itself in jeopardy — particularly if one party controls the White House, House and Senate and wants to move its agenda.

And in true Senate fashion, Republicans and Democrats are already bickering over who is more likely to blow up the Senate as soon as 2021.

“It’ll go down the road,” Senate Appropriations Chairman Richard Shelby (R-Ala.) said of the filibuster. “If the Democrats take control of the Senate and we’re in a strong minority then they’ll change it immediately.”

“If eliminating the legislative filibuster will serve Sen. McConnell’s purposes, he’ll eliminate it,” said Senate Minority Whip Dick Durbin (D-Ill.). “After what Sen. McConnell has done to this institution, there will be many people who will be putting pressure on us to do the same thing.”

Just one Republican, Mike Lee of Utah, opposed moving to debate the rules change, making a broader argument that the Senate’s rules are intended to balance “competing interests of majorities, minorities, and individual senators.”

“They facilitate the compromise and accountability that are essential to the governing of a large, diverse nation,” Lee said. “I oppose changing the post-cloture time rule. I certainly oppose breaking the rules of the Senate to do so. The current rules can work for the American people; they simply require us to do the same.”

“We’re going to be the House of Representatives by the time my term is done. And that will be McConnell’s legacy,” said Sen. Chris Murphy (D-Conn.), who was just reelected to a six-year term. “We’re headed to a majoritarian institution. And maybe we’re better off. Maybe we’d be able to have actual debates and real amendments. The House has more debate than we do.”

If Democrats win the Senate and the White House next year, there will be enormous pressure for them to gut the filibuster to enact an ambitious progressive agenda — D.C. statehood or climate change legislation or some other proposal that will not find support among enough Republicans to pass the chamber under existing rules.

Meanwhile, Trump has made clear he wants to kill the supermajority requirement, a demand that may gain new momentum if he wins reelection and Republicans take back full control of Congress. Republicans held off Trump from changing the rules for two years of unified power, but he called for McConnell to go nuclear even after the election cost the GOP the House.

Democratic activists have helped turn the filibuster into a new litmus in the Democratic presidential primary. They argue that there’s almost no way to enact sweeping changes like “Medicare for All” or a “Green New Deal” if 41 GOP senators can stop everything.

Several Democratic senators running for president, like Elizabeth Warren of Massachusetts and Kirsten Gillibrand of New York, are open to gutting the legislative filibuster. Bernie Sanders of Vermont and Cory Booker of New Jersey have been cooler to the idea. But change can happen quickly.

A decade ago, few would have foreseen the end of the 60-vote threshold on presidential nominations. That was before Republicans began stalling President Barack Obama’s nominees and ultimately blocking several of them in 2013, which precipitated the first stroke of the filibuster’s demise.

“At the end of the day, these changes deepen the divisions and the slope continues to ending the filibuster,” said Sen. Richard Blumenthal (D-Conn.). “The ‘nuclear option’ used to be nuclear. No longer.”

A decade ago, when I was young and foolish, I was a supporter of the filibuster. Now that I’m older and wiser, however, I welcome its demise.

In an ideal world, I would still favor the practice. In such a world, ordinary legislation would be regularly passed on a bipartisan basis with only the most controversial bills being subject to a supermajority requirement. But, in our modern political reality—where pretty much every legislative vote is seen as a test of party loyalty—the filibuster is insanity.

I first cracked on the issue of judicial appointments. In that case, I’ve long thought that the filibuster was extra-constitutional. That is, the Constitution gives the President the right to make appointments subject to the advice and consent of the Senate. Requiring the President to achieve a supermajority in that instance turns the process on its head. And, again, that’s particularly true in an era when even relatively mainstream, extraordinarily qualified judges receive large numbers of negative votes. (It was not all that long ago, for instance, where the likes of Antonin Scalia or Ruth Bader Ginsburg were confirmed unanimously or quite close to it.)

Over the last fifteen or so years, the parties have escalated their use of the filibuster, making it the 60-vote/three-fifths margin the default. (Until 1975, the margin had been 67 votes, or two-thirds.) The “nuclear option” was threatened many times and averted by Gang of 7 deals. Finally, it was rebranded the “Constitutional option” and ultimately unleashed. It’s a matter of time—and I predict not much of it—before it’s gone entirely.

As suggested in Everett’s piece, the main thing that was keeping the institution alive this long has been a veil of ignorance. Since we have elections every two years, today’s majority can become tomorrow’s minority in a hurry.

Yet, ironically, it’s today’s minority that’s pushing hardest for the change. To be sure, McConnell may well pull the trigger to achieve short-term ends, particularly in getting as many Trump judges confirmed as possible. But the agenda being talked about by many Democratic presidential contenders and younger members of the Congressional caucus is radical: Medicare-for-All, a Green New Deal, and even packing the Supreme Court. There’s simply no way any of that happens with a filibuster in place.