The Gerrymander Did it

A report from the Republican State Leadership Committee is quite candid in its assessment of the success of House Republicans in the 2012 election:

Farther down-ballot, aggregated numbers show voters pulled the lever for Republicans only 49 percent of the time in congressional races, suggesting that 2012 could have been a repeat of 2008, when voters gave control of the White House and both chambers of Congress to Democrats.

But, as we see today, that was not the case.  Instead, Republicans enjoy a 33-seat margin in the U.S. House seated yesterday in the 113th Congress, having endured Democratic successes atop the ticket and over one million more votes cast for Democratic House candidates than Republicans.

However, all components of a successful congressional race, including recruitment, message development and resource allocation, rest on the congressional district lines, and this was an area where Republicans had an unquestioned advantage.

Today, nearly two months after Election Day, and one day after the 113th United States Congress took the Oath of Office on Capitol Hill, the Republican State Leadership Committee (RSLC) is releasing this review of its strategy and execution of its efforts in the 2010 election cycle to erect a Republican firewall through the redistricting process that paved the way to Republicans retaining a U.S. House majority in 2012.

In other words, the main reason that the Republicans were as successful as they were is not because they were able to persuade more voters to vote for them, it is because state legislatures were able to draw lines on the map that created built in advantages for the party.

Ask yourself, regardless of one’s partisan preferences:  is that really the way we want our system to work?

And yes, I recognize that gerrymandering of this type is nothing new and that, indeed, both sides have done it.  However, that is not a defense of the practice.  Moreover, this cycle is especially egregious because it meant a party losing the aggregate vote and still winning the majority of the seats in the chamber.

The amazing thing is, the general consensus in the population is “meh” at best.

And yet:  we do like to talk about how we are the greatest democracy in the world!

Seriously, there is something rather wrong with this picture. 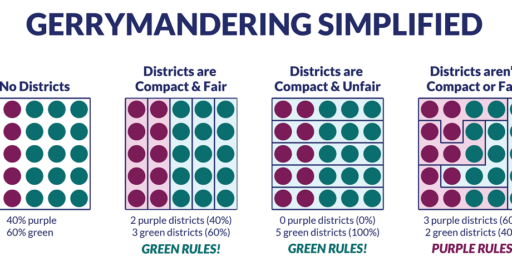