Fox Business Network has announced its criteria for the next GOP Debate, and it looks like Rand Paul, Carly Fiorina, and John Kasich will be kept off the prime time stage. 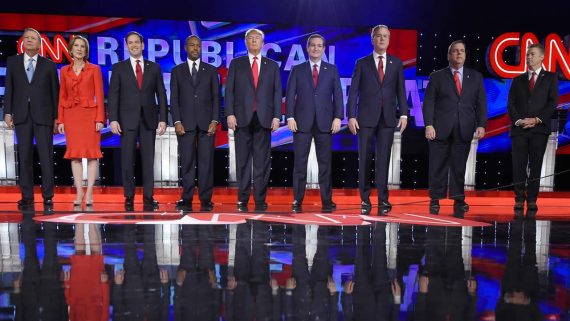 Fox Business Network has announced the criteria for the next Republican debate, which will be held on January 14th in South Carolina, and it appears likely that there will definitely be a significant reduction in the number of candidates on the main stage:

The criteria for the next Republican debate could shrink the debate stage to just six candidates, potentially pushing John Kasich, Carly Fiorina and Rand Paul out of the main event and into the undercard debate, POLITICO has learned.

The polls being considered must be released prior to 6 p.m. Eastern time on Monday, Jan. 11, and be conducted by major nationally and state recognized organizations that use standard methodological techniques, such as live interviewers and random digit-dial sampling techniques using both landlines and cellphones.

There’s no limit on the number of candidates on the main stage. But according to POLITICO calculations based on only the national polling available as of Tuesday, the prime-time debate stage would include Donald Trump, Sen. Ted Cruz, Sen. Marco Rubio, retired neurologist Ben Carson, former Gov. Jeb Bush and Gov. Chris Christie. The early state polling wouldn’t change the lineup as of Tuesday, according to POLITICO calculations of Iowa and New Hampshire polls.

To qualify for the earlier undercard debate, candidates must register at least 1 percent in one of the five most recent national polls, as recognized by Fox News.

The announcement itself doesn’t specifically identify which pollsters fall within the definition of the accepted pollsters that the network will be consulting in determining who is eligible for the main stage, but these charts  that I’ve prepared using Pollster’s design your own chart feature for national polling, as well as the polling in Iowa, and New Hampshire seem to be fairly good approximations of what they’ll be looking at. As the Politico article linked above notes, right now these criteria would keep Rand Paul, Carly Fiorina, John Kasich, Mike Huckabee, Rick Santorum, and George Pataki off the main stage, and would keep Virginia Governor Jim Gilmore, who is still in the race, out of the undercard debate. Most of all, though, it would limit the main stage to as few as six candidates, although I suppose it is technically possible that there could end up being a candidate who place within the top five in either Iowa or New Hampshire but don’t make it into the top six nationally, but it seems as though this would be incredibly unlikely. As I’ve argued before, one of the problems that has plagued the Republican debates in the early stages of the 2016 race has been the fact that there have been simply too many candidates on the main stage. Much of this, of course, was a function of the fact that there were an unusually large number of candidates in the race, but whatever the reason might be a debate with ten or eleven candidates on the stage, such as we had when all of this started in August and September doesn’t make for much of a debate at all.

The campaigns of the candidates who will be negatively impacted by these criteria will, no doubt, complain, but their complaints will likely have little merit. By the time this debate takes place there will be just over three weeks until the voting starts in the 2016 election, if you aren’t in the top six nationally or the top five in one of the early states the odds that you are going to be a serious contender for the nomination are exceedingly small. Additionally, since the network will be hosting an undercard debate yet again these candidates will still get their chance to speak to the people and state their case. Since failing to meet debate criteria in an ordinary year would mean no invitation, and no free media, at all, so in some sense these candidates should be grateful for what they are going to get. Personally, I’d be find with getting rid of the undercard debate altogether, and that’s likely to happen after the voting starts, but given the fact that the number of candidates in the race for the GOP nomination is unlikely to shrink significantly until after Iowa at least, I suppose giving these low-performing candidates a debate of their own is harmless. 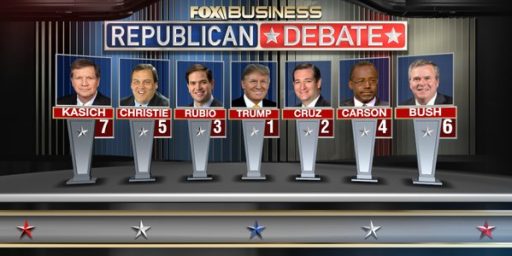 Several Republicans Likely To Be Excluded From Third Debate