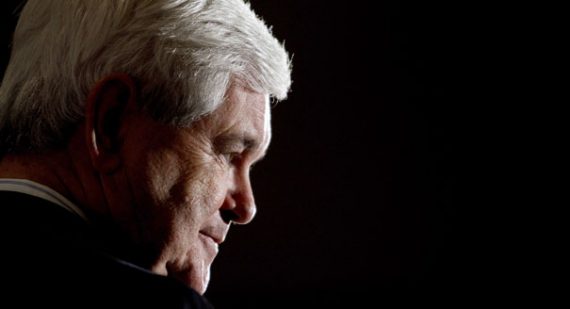 I wasn’t going to write about this at all, but it seems to be getting a lot of coverage in the press today:

Newt Gingrich choked up while discussing his mother’s struggle with mental illness during a town-hall meeting in Des Moines.

Gingrich was asked to speak about a time his mother affected him at the event sponsored by CafeMom, a social networking website for mothers.

“You’ll get me all teary-eyed — Callista will tell you, I get teary-eyed every time we sing Christmas carols. My mother sang in the choir and loved singing in the choir,” Gingrich said, referring to his wife, as he fought back tears.

“But I identify my mother with being happy, loving life, having a sense of joy in her friends, but what she introduced me to, is late in her life she ended up in a long-term-care facility. She had bipolar disease, and depression, and she gradually acquired some physical ailments, and that introduced me to the issue of long-term care, which I did with [Former Nebraska Sen.] Bob Kerrey for three years, and that introduced me to the issue of Alzheimer’s, which I did with Bob Kerrey for three more years, and my whole emphasis on brain science comes indirectly from dealing with the real problems of real people in my family,” the former House Speaker continued, at moments stopping to cry.

The audience sympathetically cheered for Gingrich as he spoke about his mother.

“I do policy much easier than I do personal,” Gingrich joked.

Already, I’m seeing comparisons being made to other famous “crying politicians” like Edmund Muskie in the 1972 Democratic race, and Hillary Clinton in 2008, and CNN is closely analyzing whether this event will hurt Gingrich or “humanize” him.

I think I’ve made it eminently clear here that I’m no Newt Gingrich fan, but this is pathetic. The guy was at a forum sponsored by Mother’s group and he was asked a question about his mother, who died just eight years ago. And he got a emotional. Big. Freaking. Deal. I’d be worried about a man who didn’t get a little choked up talking about his dead mother. My mother passed away a year after Newt’s did. I still miss her. Leave the guy alone.