The Self-Made Nature of the US’ Immigration Problem

Ezra Klein asks a question for which the answer is:  quite dumb indeed. The question, if you haven’t already guessed it, is:  How Dumb Is Immigration Debate?

The piece is based on work by Doug Massey, a Princeton sociologist who studies  immigration, and starts with a broad brushstroke look at the eras of US immigration policy dating back over a century.  The kicker, and the inspiration for the need to determine levels of dumbness, starts with the 1980s:

Border apprehensions rose to 1.7 million in 1986 from 55,000 in 1965. But even as millions of Mexicans entered the U.S. illegally, millions also returned. About 85 percent of new entries were offset by departures. Consequently, the growth of the undocumented population was slow.

After passage of a comprehensive immigration law in 1986, the U.S. began militarizing the border with Mexico even as the General Agreement on Tariffs and Trade and, later, the North American Free Trade Agreement strengthened economic ties with Mexico. From 1986 to 2000, trade with Mexico increased eightfold.

According to Massey, the rise of America’s large undocumented population is a direct result of the militarization of the border. While undocumented workers once traveled back and forth from Mexico with relative ease, after the border was garrisoned, immigrants from Mexico crossed the border and stayed.

“Migrants quite rationally responded to the increased costs and risks by minimizing the number of times they crossed the border,” Massey wrote in his 2007 paper “Understanding America’s Immigration ‘Crisis.'” “But they achieved this goal not by remaining in Mexico and abandoning their intention to migrate to the U.S., but by hunkering down and staying once they had run the gauntlet at the border and made it to their final destination.”

The data support Massey’s thesis: In 1980, 46 percent of undocumented Mexican migrants returned to Mexico within 12 months. By 2007, that was down to 7 percent. As a result, the permanent undocumented population exploded.

One of the interesting observations one could make about this hypothesis is that the increase in undocumented persons in the US was not driven by “amnesty” in 1986 as much as it was driven by increased enforcement policy.

This is an incomplete picture, to be sure.  It is also worth noting that the 1980s was a “Lost Decade” for Latin America and Mexico led the way in helping to lose it.  As such, it is hardly a shock that a lot of poor Mexicans came to the US looking for work at the time.   And, of course, the 1990s marked not only an economic boom time in the US, hence attracting Mexican labor for a variety of reasons, but it was also, as noted above, a time of substantial economic integration between Mexico and United States. 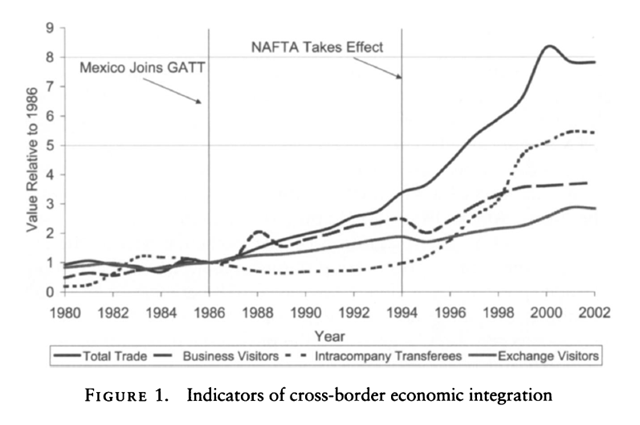 As Massey notes “Naturally, these movements of goods and services are accompanied with movements of people, as people are what make markets work” (311).  He also notes in the text that in addition to the exchanges noted in the graph, tourism increased 5.7 times and the number of Mexican exchange students increased by a factor of 2.5.

Klein goes on to note:

The militarization also had another unintended consequence: It dispersed the undocumented population. Prior to 1986, about 85 percent of Mexicans who entered the U.S. settled in California, Texas or Illinois, and more than two-thirds entered through either the San Diego-Tijuana entry point or the El Paso-Juarez entry point. As the U.S. blockaded those areas, undocumented migrants found new ways in — and new places to settle. By 2002, two-thirds of undocumented migrants were entering at a non-San Diego/El Paso entry point and settling in a “nontraditional” state.

I will say that I think that dispersal of migrants is also attributable to increasing demands for labor in agriculture across the country (such as working in poultry in Alabama or in labor-intensive crop-picking jobs across the southeast).  However, the hypothesis makes sense:  if one cannot return home without risking trouble with la migra, then it is best to look stay put (not to mention to get away from places where border enforcement is being intensely focused).

Beyond the issue of dispersal, the point above also points to the “balloon effect” (which is usually used in discussion of drug policy, but fits here as well):  when you squeeze a balloon, the air just bulges out elsewhere.  So in this instance the US government applied great pressure to key points of entry, but all that did was disperse the inflow and make the issue all the more complicated.

Of course, all of this underscores the truly simplistic, if not absurd, nature of much of the immigration debate.  Instead of looking at complex social and economic forces, the debate often gets reduced to almost infantile assertions about “sealing the border” or “amnesty!”

Klein gets to the heart of the matter:

In recent years, the net inflow of new undocumented immigrants arriving from Mexico has fallen to zero. Some of the decline is due to the U.S. recession and a falloff in construction, which employed a lot of migrant workers. But some is due to an improving economy in Mexico, where unemployment is 5 percent and wages have been rising. “I personally think the huge boom in Mexican immigration is over,” Massey said.

Yet the political debate over immigration is stuck in 1985. Congress is focused above all on how to further militarize an already militarized border — despite the fact that doubling the size of the border patrol since 2004 and installing hundreds of miles of barriers and surveillance equipment appears to have been counterproductive. At any rate, the flow of unauthorized immigration has slowed dramatically. “Listening to the Republicans, you’d think waves of people are crossing the border,” Massey said. “But illegal migration stopped four years ago and has been zero since.”

1.  If one leaps to the conclusion that border security is what led to the net decrease in immigrants, then one needs to stop and do the math:  four years ago the Great Recession was hitting, and hitting hard.  Unemployment was huge and construction practically halted.  Migrants workers cannot come to get jobs that do not exist.  This situation underscores that the main driver of this entire discussion is economics, not security policy.

2.  Even if one rejects my point in #1 and one thinks that “see, security is the sine qua non of this conversation” then one has to admit that talk of “sealing the border” or other security-linked preconditions to immigration reform simply aren’t necessary (given the data) and we should be able to move off that square to talking about the main issues that need addressing.

In light of these facts, the debate is backward. Republicans in the House of Representatives are focused on further militarizing the border against the people who are no longer crossing it; at the same time, they are loath to do anything about the millions of real undocumented immigrants who are the legacy of the last buildup. At best, we can hope to waste tens of billions of dollars on further enforcement in return for a lengthy and complicated path to citizenship. At worst, we’ll do nothing — in which case this will be known as the era of wasted opportunity.

This is all an illustration of the poor quality of political debate over very real issues.

BTW, for those who have access to JSTOR or like databases, the citation for Massey’s article is as follows: